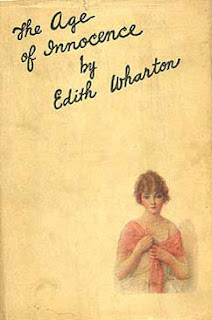 Edith Wharton set aside the manuscript of A Son at the Front next to that of The Glimpses of the Moon, and after an interval came up with the scenario of still another novel. It bore the working title 'Old New York' and the scene was laid in 1875. The two main characters, Langdon Archer and Clementine Olenska, are both unhappily married. Falling in love, they 'go off secretly,' Edith explained, 'and meet in Florida where they spend a few mad weeks' before Langdon returns to his pretty, conventional wife in New York, and Clementine to an existence, separated from her brutish husband, in Paris.

from Edith Wharton:  A biography, by R.W.B. Lewis
Happily, it became so much more than this, although I wish she had kept the 'Clementine.' :)
It was hard for me to believe this, but I first read The Age of Innocence 40(!) years ago, in Professor Lewis' seminar on fiction set in New York.  It may not be the first book by Edith Wharton that I read, but it's probably the one that drew me to her. {I'm not sure; I may have read Ethan Frome in high school; I know I've read it and didn't like it very much. I should try it again.}  I'm also not sure how many I've reread The Age of Innocence since then, maybe two or three.
This is its 100th anniversary, and I made big plans early this year to read it in installments, and re-read this biography or another one, to set it in context, and so on, but here it is October, and a few things this year have gotten in the way of this and most other plans. :) But I'm glad it's still timely. The novel was published in serial form from July to October, and then in book form shortly thereafter. The biography will have to wait till this winter, but I have a read-listen version of the novel set up and enjoyed the first two chapters this morning.
My first observations:  it's set at an earlier than I remembered, about 50 years before it was written, at a time when Wharton was about 13 years old; so she wasn't writing about the world she experienced as an adult, but looking backward.
She writes delightful zingers ...

To come to the Opera in a Brown coupe was almost as honourable a way of arriving as in one's own carriage, and departing by the same means had the immense advantage of enabling one ... to scramble into the first Brown conveyance in the line, instead of waiting till the cold-and-gin congested nose of one's own coachman gleamed under the portico of the Academy. It was one of the livery-stableman's most masterly intuitions that Americans want to get away from amusement even more quickly than they want to get to it.

... and Newland Archer, who {despite Daniel Day-Lewis} never seemed admirable in the end, comes across as self-absorbed right way.

I didn't read any Wharton until I was an adult, unlike most people who read Ethan Frome in high school and hated it. I was nearly 40 when I read Age of Innocence, and I thought it was just OK, but a few months later I read House of Mirth and was floored, it was so good. I then read Ethan Frome in one sitting and loved it, I've read it at least three times since and loved it every time. Maybe you have to be an adult to appreciate Wharton.

I loved House of Mirth. Still haven't read Age of Innocence but I liked your review.