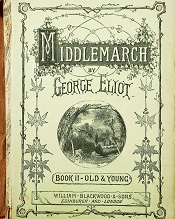 Progress with Middlemarch continued slowly. By mid-March 1871 Marian moaned to her journal, 'It is grievous to me how little ... I manage to get done.' Yet by the beginning of June, Blackwood held the first part of Middlemarch in his hands and pronounces himself "intensely delight with Miss Brooke,' finding the novel 'filled to overflowing with touches of nature and character that could not be surpassed'. He expected she would repeat, if not excel, her previous triumphs. When he read the second part a month later, he worried that it introduced completely new characters but, as 'you beautifully express it, we never know who are to influence our lives'. She was, her publisher extolled, 'like a great giant walking among us and fixing every one you meet upon your canvas'.

As you may know, I love to read literary biographies, so I was very happy to find this relatively short (230-page) but very readable and well-written one in the college library, so I could refresh my memory a little about George Eliot while I'm re-reading Middlemarch, and not risk too much distraction from reading the novel itself. I've actually just gotten to the part where she's writing Middlemarch -- in parts, the way we're reading it.  It was interesting to learn that George Eliot first started writing a story about Dr. Lydgate, then a separate story about 'a Miss Brooke,' before she decided to combine them into one novel -- and to read that the first installments of the book were published before she had written the final ones, and (unsurprisingly) that she felt the strain of 'composing the story whose outcome she had not yet decided in the knowledge of readers hoping (in vain) for the author to contrive the marriage of Dorothea and Lydgate.'

Meanwhile, it's still May, so I still have time to read Book 2. Maddox quotes George Eliot's wonderful description of Causabon's (ahem) 'stream of affection,' which I'm looking forward to coming across. :)


At the time of the book's appearance, the critics were rapturous. ... The Times waited until March 1873 to publish its four-column review by Frederick Broome, who raved, "There are few novels in the language which will repay reading over again so well as Middlemarch.' ...
... Even the New England poet Emily Dickinson wrote to a cousin, 'What do I think of Middlemarch? What do I think of glory?'

Two surprises... both that it started as two separate stories and that the first installment was published before the end was written! What a good idea to read the biography alongside the novel. The only time I've done that was with Richard Yates. Still think it's the best literary bio I've read!

Hope you continue to enjoy MIddlemarch. Will you reread My Life in Middlemarch when you're done? ;-)

Well, now that you've reminded/tempted me, of course I will! :)

I read somewhere that Eliot read all of Jane Austen's novels before embarking on Middlemarch. I think that probably Dorothea's light-hearted sister and her distaste for Casaubon was probably inspired by Austen.

I've read Middlemarch twice, once for pleasure and once when I was at uni, but somehow I don't think I'll read it again. I admire Eliot but don't love her in the way I love Austen.

That's fascinating! I can defiitely see that. I also just read that G.E.'s sister made a somewhat unfortunate marriage, with a doctor who spent her inheritance from their father and left her with debts when he died. I don't remember yet what happens to Dorothea's...