I hope, dear reader, that you may be one of my descendants, but as I write a German aeroplane has circled round above my head taking photographs of the damage that yesterday’s raiders have done, reminding me that there is no certainty of our survival. If you are not one of my descendants then all I ask of you is that you love the country as I do, and when you come into a room, discreetly observe its pictures and its furnishings, and sympathise with painters and craftsmen.

I had {as I too often do} high hopes and great plans for participating, voluminously, in Jessie's recent Persephone Readathon; in the end, I did read one book — this one — and it was lovely.

Tirzah Garwood, who lived from 1908 to 1951, was an artist who painted and also worked in woodcuts and marbled endpapers. {We learn in the book that she was christened Eileen Mary, but was soon called Tirzah by her siblings, either because of a biblical character with that name or because one of her aunts referred to her as Tertia because she was the third child in her family). As a young art student, she met Eric Ravilious and married him. I admit that I was drawn to her story because of my growing fondness for his work, but after reading this book I've grown even fonder of her. 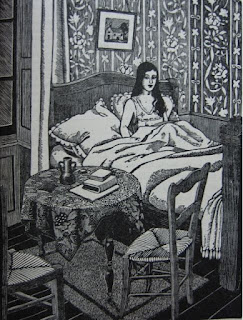 Garwood began writing her autobiography  when she was 39, and facing breast cancer for the first time. {I knew about this going in, and wondered whether it would be hard for me to read about it, but she is so matter-of-fact — and, in those oh-so-very different days, was actually given a mastectomy without ever being definitely told that she had cancer.}

There are moments that are poignant, but many others that are funny or just ordinary. In some, there's a great sense of what people experienced in the homefront during World War II {I had not known that Eric Ravilious died working as a war artist, when the plane he was flying to Iceland in was lost and never recovered). In others, there are infidelities (hers and his), and artists, and friends with their own troubles, and eccentric aunts. As I read, I often found that it was hard to remember who the people were that came and went, but that didn't really matter. Tirzah was talented, and imperfect, and brave, and it was spending time with her that kept me reading. 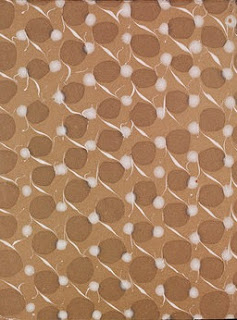 {One of Tirzah's decorative papers, in the Victoria & Albert Museum}

Thank you, Jessie, for organizing the Readathon; I have been wanting to read this Persephone ever since it was published. I'm so glad I finally did, and I'm piling up more books to read about this group of artists. 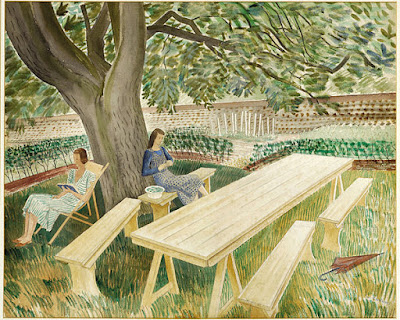 {Two Women in a Garden, by Eric Ravilious.
I have a coffee-table book about the artists of Great Bardfield, that
I'm sure I bought because this picture is on the cover.}

This one caught my eye in the Persephone catalogue, but yours is the first review I've seen. I am adding it to my list!

I've been meaning to read this for so long, but because in turn the book is so long there always seems to be something else to do first. This is a good push in the right direction. Thank you.