For Elizabeth Taylor, on her birthday 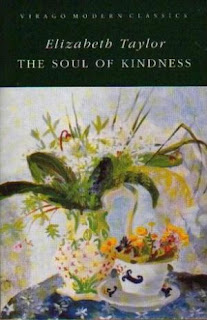 I 'discovered' Elizabeth Taylor in an odd way.  When I first moved to Boston, one of my first happy finds was an odd, wonderful, bookstore called The New England Mobile Book Fair {it wasn't one ... I think it was a book distribution business open to and made accessible for the public).  It had three things I loved:  all the new books were 20% off {in the days before Amazon}, new cookbooks were often 40% off {they had their own catalog}, and in addition to stocking just about any new book I might want {they were arranged by publisher, though, so it wasn't especially conducive to browsing...I had to do some homework first}, there was an equally large remainder section {this was arranged by subject, so it was easier to get carried away}.  Even so, in those early days, the remainder section had a whole section devoted to Viragos, and I bought a lot of them, without knowing much about the authors, an embarrassing number of which still sit unread on my shelves.

Several of them were by Elizabeth Taylor, but this is only the second one that I've read.  It was nice  that when I was looking for ideas on what to read in honor of Jane's Birthday Book of Underappreciated Lady Authors, I found I already owned the ones that sounded most appealing (and even nicer that she and I read the same one).

The soul of kindness is Flora, a pretty, delightfully air-headed young thing whose good words and good deeds are often insensitive, even unwittingly harmful. After her wedding, she thanks her lonely, widowed mother in a way that hurts; she buys her father-in-law a cat which he does not want; she tries to foster her friend Meg's unrequited romance with a gay man {'Do use your intelligence,' her husband tells her.. 'Oh that,' Flora responds. 'I never believed it.,'}, and she encourages Meg's brother, an unsuccessful actor, to believe that he will have a brilliant career. She is loved, and tolerated, and dismissed, in turn, by her friends and family; there's only one character, Liz, an unpleasant, quirky painter, who instantly dislikes her, although they have never met. All of the characters are wonderfully drawn, and most of them {in contrast to Flora} are mildly dissatisfied, or struggling against the lives they have which are not the lives they want. And then there's Miss Folley, who deserves a book of her own.

I think we're meant to see devastating harm in Flora's lack of understanding of other people, especially in what happens at the end of the book. It was a little hard for me to see her as the villain of the piece {maybe times, and our sense of personal responsibility, have changed?}  But I could, and did, read and greatly enjoy it, in other ways, and I have a feeling that the other books of hers that I bought so long ago won't stay unread for long.


The Soul of Kindness, by Elizabeth Taylor
First published in 1964
From my bookshelves

I've yet to read her, but this one sounds lovely. There is also a very nice VMC edition of A Game of Hide and Seek on my shelf.

The one with the flowers? Those new editions are SO pretty. Mine isn't ... I chose a micer cover image than what's on my copy. :)

You might have done well to save those books for a few years. When I first discovered Taylor I loved Angel, was disappointed in the next book I tried, and I gave up on her. When I tried again, years later, to try to understand my so many readers with similar tastes rated her so highly I found that I did too.

No, the one with the flowers is gorgeous! Mine was purchased in London nearly ten years ago - up-close photo of a man and woman looking into each other's eyes, intro by Elizabeth Jane Howard.

I would say Mrs Palfrey at the Claremont is my favourite novel by Elizabeth Taylor, and the movie is pretty wonderful too. She's one of those authors I would never had discovered if not for other book bloggers....it doesn't bear thinking about!

Must revisit ET, the one I really liked was Blaming.