Elizabeth and Nathaniel and Sophia 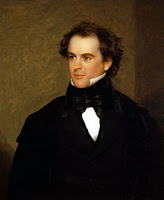 Nathaniel Hawthorne did not come alone that Saturday night, but with 'a hooded figure hanging on each arm':  his two sisters, the older bookish Elizabeth (known as as Ebe) ...and the younger Louisa, now the most sociable member of the reclusive Hawthorne family. The image of the strikingly handsome author in black cape and silks -- he made a point of dressing well in public, Hawthorne later confided, in an effort to conquer his reserve -- flanked by two women would become an indelible one...
On November 11, Elizabeth welcomed the three Hawthornes into the parlor where they sat stiffly in a row. It was dark, or her guests might have peered out the parlor window at the neighboring cemetery, where they could easily have seen the gravestone of their ancestor John Hathorne, the 'hanging judge' of Salem's long-ago witchcraft frenzy, a few yards off. ... Elizabeth tried easing their shyness by showing off a volume of drawings she had borrowed from a Harvard professor... Succeeding in engaging her guests' attention with illustrations of the Iliad, she left them turning the pages to run upstairs to Sophia in her sickroom, 'Mr, Hawthorne and his sisters have come,' she burst out, 'and you never saw anything so splendid - he is handsomer than Lord Byron.' As Elizabeth told the story years later she urged Sophia to dress and come down to meet the writer, but Sophia refused. 'I think it would be rather ridiculous to get up,' Sophia tweaked Elizabeth, impatient at being pressed by her older sister in yet another of her enthusiasms. 'If he has come once he will come again,' she predicted.

from The Peabody Sisters, by Megan Marshall

This biography, which I'm enjoying very much, opens with the wedding of Sophia Peabody and Nathaniel Hawthorne, and that wasn't a spoiler (I already knew about their marriage from other reading).  But if these three 19th-century Boston sisters and their fractious relationship wasn't enough to draw me in, there was a hint, early on, of a love triangle among the studious, zealous, irritating, earnest oldest sister Elizabeth, the delicate, artistic, headache-suffering, youngest sister Sophia, and splendid Mr, Hawthorne, and I've finally gotten to that part. :)

There's a fascinating glimpse of Hawthorne and his own odd, reclusive family (his widowed mother, his two sisters, and himself, eating their meals alone in their rooms and sometimes not seeing each other for months) and of course I'm now longing to read more about him, but during my bus ride into work and my bus ride home, Elizabeth has coaxed Hawthorne into visiting, she has offered to help the young author with introductions and reviews, he has confided in her about his family life, and over the course of a few months they have reached an understanding.


Elizabeth Peabody was an unconventional woman --not unattractive,shiny-haired, slim and small -- a woman who talked easily and could coax a shy man to speak freely as well. She was also messy, headlong and headstrong. But Nathaniel Hawthorne was accustomed to unconventional women, both independent-minded and willful ones, like his older sister Ebe, and passive, retiring ones, like his widowed mother. For much of his life, Hawthorne had found the pull of these women...undeniable. Elizabeth Peabody was like them, but perhaps not quite enough. The same qualities that allowed her to help him professionally -- her enterprising, almost meddlesome nature -- may have begun to put him off.

And of course she has been telling him about Sophia, with her 'beatific suffering' and her artistic sensibilities. Poor Elizabeth.

By March,Sophia was feeling 'better than for a month' and ready to contemplate the journey downstairs ... she knew that soon the clematis vine climbing toward her window would bloom, and she wanted to  gather the blossoms herself. Downstairs, too, she would find this strikingly handsome writer -- 'handsomer than Lord Byron' --  that her sister had been telling her about all winter long.
We cannot know on which of the first voyages beyond her room during the spring of 1838 Sophia Peabody finally met Nathaniel Hawthorne face-to-face.  But on that day Sophia dressed herself in a 'simple white wrapper' and summoned just enough strength to reach the parlor, where she sank into the couch reserved for her use, interrupting a conversation between Elizabeth and Nathaniel Hawthorne.  'He rose and looked at her -- he did not realize how intently,' Elizabeth later recalled. The startled older sister watched as each of Sophia's infrequent remarks, delivered in her 'low sweet voice,' was met with that 'same intentness of interest.' ... Elizabeth, who had once accused her little sister of being a hypochondriac, had always suspected Sophia of retaining the power to cure herself when she felt like it.

Oh my, indeed!! This sounds like a wonderful biography :)

This sounds really fascinating and I love the passages you've quoted.