I'm often drawn to books about houses, but as someone who once {thankfully not since} moved five times in six years, books about moving house, somehow appeal to me as well.  Or maybe it's books about new houses, since most of those moves felt like this ... 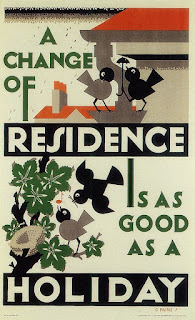 ... especially this most recent one.{I love this poster, from the Persephone Books page about this novel.}

Greengates tells the story of the Baldwins, a middle-aged couple living in the outskirts of London, in a now-shabby house they called 'Grasmere.' As the book opens, Mr. Baldwin is retiring (literally, that day) from his job at an insurance company in the City; he eats his lunch, takes a walk, receives a small clock from his co-workers, and rides the train home, all as usual, but for the last time.  He is full of great plans:  he will bring his neglected garden back to life, and become a Historian, but instead there's a roller coaster of emotions, and frustrations, and small failures. His being at home all day is also hard on his wife; he reads in her favorite armchair, their finances are strained, and without anecdotes from their separate days, they quickly run out of things to talk about. Then, in desperation,  Mrs. Baldwin convinces him to go on a country walk as they used to. They follow the same footpath, to see the same view, and are surprised at how much things have changed; there are new roads, and dozens new houses being built, and they can't resist taking a look inside the new, clean, lovely modern show house.

I had Greengates on my wish list mostly because I greatly enjoyed The Fortnight in September, and this one has some of the same feeling, but seems a little darker. {Is it my imagination, or do a lot of the Persephones have that thread running though them?} I found myself wishing that Mr. Baldwin would pull up his socks, and be less-self absorbed, and liking Mrs. Baldwin for her good heart; the small ordinary moments and the emotions that they feel are wonderfully observed and fondly drawn.

The Persephone Readathon that Jesse hosted this month (thank you, Jessie!) was the perfect inspiration to catch up a little on the Persephones I want to read (and to share our common pleasure in them ); I'm even hoping to  sneak in another one. Jane has reminded us that it's Dorothy Whipple's birthday soon. I've never read her, though so many of you love her books. I'm not being verdant on purpose, but I was very happy to find Greenbanks for my Kindle ... and it's another one about a house. :)

Jesse suggested that we list three Persephones from our wishlists, so here are mine (a slightly random selection, as there are a dozen others) ...

No. 119.  Long Live Great Bardfield, by Tirzah Garwood
{I take it back; this is one I long to read most}

No. 125.  Guard Your Daughters,  by Diana Tutton
{because the library had it, though not the Persephone edition,
and it sounds like fun}

Funny, we moved around a lot when I was young and I'm also drawn to books about houses... do you suppose there's a connection? Not sure why Greengates wasn't already on my wish list, but it is now.

I hope you get a chance to read Dorothy Whipple soon!

It's been lovely seeing all the Persephone posts. I have been making a list, for the next time I feel flush enough to place an order, but the list keep changing!

I hate moving so very much, I get so anxious and then I procrastinate, which just adds to the anxiety. But people moving house in books always seem to have staff to handle it.

(I am still on the long library list for the Cadbury book, which is to my right as I'm typing. Did you know she's also written a book about the competition between the major chocolate companies, including Cadbury? I had it out from the library but had to give it back unread.)

I haven't read this, but I love the sound it. 'Greenbanks' is one I have read, and I will be disappointed if you don't love it too.