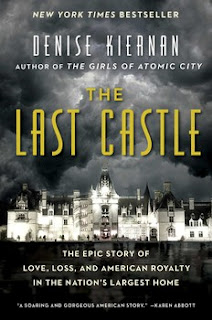 I have always enjoyed visiting historic houses — I fell in love with Winterthur when I lived in Delaware, and there are many wonderful ones in the towns around Boston and further afield.  But whenever I visit one, I'm especially drawn to the stories that are told about the people who built or lived in them, hoping that the gift shop will have a biography or two.

I haven't been to Biltmore, but I still hope to visit someday, and even more so now because I've read this engaging book first. {Thank you, JoAnn, for letting me know about it.}  It's a fascinating story, how and why this 250-room French chateau came to be built in North Carolina, and even more so because what happens is often unexpected.  In a nutshell, the house and its estate were conceived and largely constructed while George Washington Vanderbilt, the grandson of Cornelius Vanderbuilt, was still a bachelor, and opened (though never completely finished) in 1895, soon after he married Edith Dresser, who was less wealthy but descended from an impressive Old New York lineage.  Unlike the mansions in Newport, for instance, it was planned as much more than a rich man's home  — Vanderbilt wanted to create a self-sustaining estate, and to practice new ideas about forest conservation.  Over time Edith also contributed, through her philanthropy and social programs and by creating Biltmore Industries, to showcase and sell traditional Appalachian crafts.

It's not really clear why George chose to build a house of so grandiose a size, but you do get a sense that he had a strong vision {'perhaps a wildly misguided one, but a masterpiece nonetheless'} for Biltmore, that went beyond it's being a showcase for unimaginable wealth. George and Edith had a happy and sustaining marriage, in the midst of many family tragedies. George only lived at Biltmore for about 20 years, before his early death in 1914, and their daughter Cornelia inherited the house and estate, bringing it into the Jazz Age and first opening it to the public before an unhappy marriage led her away.  The estate never really become self-sustaining; there's a wonderful story about the first year the estate turned a profit  —  of  $16.34. It was fascinating to read that Biltmore is still privately owned and managed by Cornelia's descendants.

This was a very readable book, the kind you can dip into from time to time without losing the story. Along the way, the author weaves in a lot of anecdotes about visitors to the house, and other goings-on that aren't strictly relevant to the story, but when the anecdotes are about people like Henry James and Edith Wharton, I'd never complain.  {It was also nice to read about Gifford Pinchot, who was involved early on in the forestry programs at Biltmore and became a leading figure in this field; I don't think he's a household name, but he's descended from the Enos, the leading 19th-century family in my hometown, and has his own tree there.}

The Last Castle:  the epic story of love, loss and American royalty in the nation's largest home, by Denise Kiernan
Touchstone Books, 2017
Borrowed from the library

Noted under: History, Homes and Haunts

Sounds wonderful. I love books like this, especially when I have a reasonably good chance of visiting the location. Biltmore has been on my list for years, but I really don't know anything about it. Great review--enjoyed reading it.

So glad you enjoyed it! I'm still on the hold list at the library, but am worried it might not get to me before we leave for FL. In that case, I'd have to start all over again on another library hold list. My other option is to use an audible credit... might end up going that route. Sounds like I'm in for a treat :)

Sounds like a great read. Oh to visit New England ...

I remember visiting here as a kid back in the 1980s. It was wonderful and I would love to return now and learn more about the family story. As a kid I was just interested in things like the indoor swimming pool!