The Lowells of Massachusetts 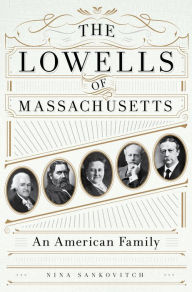 If you've been here before, you probably know that biographies are one of my favorite genres, and possibly that I have a soft spot (after reading them) for beautifully-written biographies of people who might not otherwise have caught my interest.  I've also mentioned that I don't browse in the library as much as I did before easy (not to mention multitudinous) reserves took over, but also that the recently renovated Boston Public Library is magnificent and much more inviting than it used to be.  And, of course, I'm drawn to books about my beloved city. All of this is just by way of saying that this book, unheard of and discovered by chance on the new biographies shelf, would have found its spot on my best-books-of-the-year list on its own merits, even if it hadn't ticked almost every single one of my boxes. :)

The point is made, early on, that the poet Robert Lowell is probably the most well-known descendant of this family,  so he's (deliberately, I think) only mentioned in passing.  Instead, the book recounts generations and generations of Lowells, from Percival Lowle, a successful merchant who emigrated to Massachusetts from England in 1639, with his wife and three of his eight children, when he was 68 (imagine!) to escape religious and economic persecution, to Amy Lowell, who was an incredibly famous and innovative poet in her day (although I don't remember reading much of her work, or anything about her, in my literature classes, though I have recently).  The Lowells in between them are merchants and farmers, politicians, lawyers and judges, beloved ministers, professors and a president of Harvard, poets and writers, abolitionists and philanthropists, and an astronomer (Pluto -- beginning with P.L. -- was named for Amy Lowell's brother Percy, whose work led to its discovery). And there are others who are there at the edges (Isabella Stewart Gardner's husband was a Lowell).

Other than just telling a long and fascinating story, I thought this book did two things exceptionally well.  First, it was organized around significant periods in history -- the early settlers, the Revolutionary and Civil Wars, the beginnings of manufacturing, etc. -- and the eras before and after them, and, skipping some generations, introduced us to Lowells who were engaged with what was happening at the time. {The Lowells were a close-knit family, often living together and in the habit of using family names, and combinations of names, over and over again, so there are tons of Charles and Johns and Annas and Marys and Hannahs and Rebeccas; it was hard to keep track of who was who, but in the end it didn't really matter. } The other thing, which made this book so readable, was that the historical details were interspersed with vignettes that read like fiction but rang very true.

A light breeze skimmed over the front steps of St. Paul's Church in Brookline, Massachusetts, stirring the lace-trimmed hem of Elizabeth Lowell's dress. She stood at the open doorway but turned for just a moment to look back at the coachman. Patrick Burns had been with the family for years and had taught Bessie all she knew of horses, and more. Burns nodded at her now and she took her father's arm. The two of them, father and daughter, proceeded forward through the door and into the church.
Inside, William Lowell Putnam waited for Bessie. Will was her cousin, and as such, she had been aware of him most of her life. But awareness had grown to something more over the past few years, to interest, then affection, then love. All her family trusted Will, but no one trusted him more than Bessie. For Will, she would give up her role as stand-in mother for her little sister and manager of the family home, called Sevenels. For him, she would start a family of her own, manage a house of her own. With him, she would create a new branch of the Lowells and the Putnams, adding to an already outstretched family tree.
She was twenty-six years old, sturdy and sober and sure of herself. Her hair was thick and brown, and her eyes were hazel. She had the soft Lawrence chin of her mother and the broad forehead of a Lowell. ... Will, twenty-seven years old, had been named for Will Putnam, who died in the Civil War just a month before he was born. It was Will's smile...that had saved his grandparents, his aunts and uncles, and his mother, Harriet, from all-consuming grief after the deaths of  Willy, then Jimmy, then Charles. ...
Even as a grown man, Will laughed and smiled easily, and his friendliness was infectious; it was returned. He was not a handsome man, for he looked like a walrus, with his bristling whiskers and bulging eyes. But he had that smile, and he was kind and smart. Across the lines of Brahmin families, he was trusted not only with money, for he invested for many of them, but with their confidences. He kept secrets well, and money grew under his care.
Fourteen-year-old Amy, Bessie's younger sister, had prepared for days for the wedding. How to greet guests, how to sit still in church how to eat daintily, and not too much. At an engagement party for her elder sister Katie, Amy had eaten so many plates of rice that at the end of the evening she could not button her coat. She never wore that coat again.  In a self-portrait she drew just days before Bessie's wedding, she'd sketched herself in profile:  sweet smile, straight nose, hair worn in a single braided plait down her back -- and a belly that looked as if she carried a large parcel beneath her dress, bound across her middle. ...


I had understood this a little, beforehand, but it was very interesting to read about how incredibly intertwined Boston Brahmin society and culture was during most of the years covered by this story.  Lowells married cousins, and some marriages cemented business alliances, but it was shocking when family members began to marry outside this very restrictive circle. And there were so many stories of great loves and terrible tragedies, so I had a real feeling of who they were as individuals, not just historical figures.

I also loved discovering that the author graduated from the law school where I work, but probably spent some (or a lot) of her time in the depths of the university libraries.  If I had gone to law school, I hope that I would have ended up doing that too. :)


The Lowells of Massachusetts:  an American family, by Nina Sankovitch
St. Martin's Press, 2017
Borrowed from the Boston Public Library

This must have been one of the library finds that kept you from Phineas Finn... sounds like the diversion was definitely warranted! Glad you enjoyed this one :)

PS - The author also wrote Tolstoy and the Purple Chair: My Year of Magical Reading, which I read a couple of years ago.