A House in Flanders 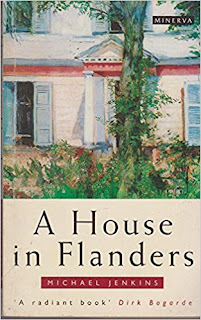 Since I was invariably the first person about in the mornings I had appropriated the steps to the terrace as a vantage point from which both to command a view over the plain and to follow what was happening indoors.  Beneath my feet a swastika, roughly carved with a soldier's knife, was a relic of the not so distant German occupation of the house. I would sit, with the stout black labrador Mardi stretched out beside me, usually reading a book recommended to me by one of the aunts, or gazing at the view while, like Mardi, keeping an ear cocked for sounds indoors. A creaking followed by a crash of shutters meant that Tante Lise was opening the house on her morning round; a rattle of the glass panes in the front door heralded the departure of her niece Madeleine to shop in the village; while the shuffling feet on the stairs signalled the descent of Oncle Auguste, anxious to swallow his coffee and escape into the garden before his wife, Alice, could find some uncongenial task for him.
Mornings were elalways somnolent at the house. The aunts were not early risers and Zoe the cook would already be cutting up the vegetables for lunch, as one by one, they appeared at the door of the cavernous kitchen in search of sustenance. Only Lise was down before the others had stirred, preparing the first of several meals during the day for her cocker spaniel, taking fresh grass to her rabbits who had over the years progressively taken possession of the old stables in the courtyard, and laying a tray for her elder sister, Yvonne, with which she would painfully make her way upstairs at nine o'clock precisely.

It's set in Flanders, not Paris, but when I needed, to be honest, a more cheerful book for Paris in July than the one I had planned to read, I was happy that this one was still in my library pile. {And Paris does make a cameo appearance...it's the place that you come from if you are not quite who you should be, or where you go when you need a fresh start, although it's inevitable that you will come back home.} It's a short book, only about 150 pages, and part of me wishes it was much longer, while part of me thinks that it's perfect just as it is.

Looking back to 1951, when he was fourteen, Michael Jenkins (who, as it turns it, is a British diplomat and author of many other books) is remembering the first summer he spent with the Aunts, three elderly ladies who live with other family members on a farm in Flanders. Before he arrives, he knows that they are not really his aunts, but old friends of his parents, who visited them decades ago when they were newly married; as the summer unfolds, he learns more about how they are connected, and more about the siblings who were lost in the world wars and the ones that remain. Each of the book's chapters focuses on one member of the family, and young Michael's connection with them, with the house, and its gardens, and the village nearby described in wonderful detail.  A family, and a house, that it was lovely to spend time with.

A House in Flanders, by Michael Jenkins
Souvenir Press, 1992
Borrowed from the Boston Athenaeum

Noted under: Homes and Haunts, Memoirs, Paris in July

I'm already waiting for the Jane Austen book. You've been very bad for my bookish resolutions this week :)

I love this book so much! I read it last year at the end of summer and thought it was so lovely and so, so perfectly paced for my lazy vacation-addled mind.

I have just perused your reading lists. Quite a wonderful read in themselves. I'm a great reader too. I may have missed it but if you haven't read Diary of a provincial lady by E M Delafield, I highly recommend it. One of my all time favourite reads and it's a rare book as it mkes me laugh. Best wishes, Rose (UK)

This sounds wonderful! Making a note for Paris in July next year :)