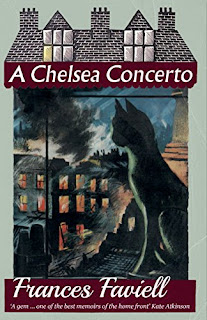 Unlike the ebooks I could have borrowed when I had Amazon Prime, I initially thought that the ones available under the Kindle Unlimited would make subscribing to that service worthwhile ... especially since several of the new Furrowed Middlebrow books were included, like this one, and now this one ... until I realized, three months later,  that I could have just bought and kept the {limited number of} books that interested me, and still spent less. {Sheesh, I'm glad I'm listening to an audiobook about mindfulness...}  But this is just me being annoyed with myself, and I should be encouraging you to read this wonderful book.

The author {her real name is Olivia Faviell Lucas} was a portrait painter, in her mid-thirties, living in London's Chelsea neighborhood, and like her friends and neighbors, doing war work and helping to resettle refugees during the Blitz. What she describes, without flinching, is often unimaginable {because she was smaller than the first rescuers on the scene, she was lowered headfirst into the rubble of a bombed-out house, holding a flashlight in her teeth, to try to administer morphine to a dying man trapped inside; on other days, she worked with other volunteers to reassemble body parts so that families would have a complete person to bury; and then there's the ending...}, though at other times she and others find moments of lightness and hope {soothing grumbling refugees and stamping out little incendiary bombs that fall from the sky like fireflies, or the miraculous day when a beloved doctor's 12-year-old daughter is found alive, buried up to her neck in debris, four days after their house collapses}.

It's beautifully written, and I think I fell in love with it even before I started reading it, when Virginia Nicholson (a writer whose work I enjoy) said in her introduction that she learned of it by often seeing it referred to in other books she had been reading -- one of my very favorite ways to discover a book. {And I wanted to save what she wrote:  'There are books when we want to find out what happens, and A Chelsea Concerto is certainly one of those. But more than that, I found -- every time I turned to it -- that I relished its author's company. I wanted to be with her; I wanted to experience the Blitz through her eyes and sensibility.' }

I couldn't recommend this book highly enough {it's also out in paperback}.  I'm already sure it will be one of  the best books that I'll read this year, and if, like me, you might need a reminder that your troubles are so mild compared to others', this book is a lovely way to receive one. :)

I have four titles from Furrowed Brow which I have yet to read; this is one of them. I'm encouraged that you liked it so much, for surely I will, too.

Isn't it difficult to learn by mistakes?! Somehow, I keep (mistakenly) thinking I'll get to a place where I won't keep making them.

Glad to hear you enjoyed this book, Audrey. It was kindly sent to me as a download but I don't enjoy reading books that way so I need to place an order for a print copy. The resilience of people during this time never fails to astonish me. Even more so today, when a low-battery message on a device comes close to fracturing the composure of too many to count. Although, if my tea bags were rationed, I might come close to a bit of a sob, if I'm being honest.

I've just read The Provincial Lady in Wartime which was wonderful so I'm very interested in this.