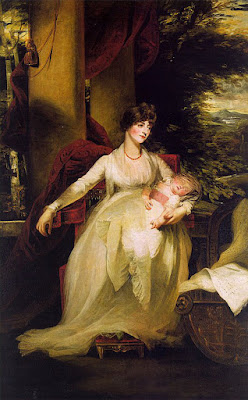 Though I don't seem to pick them up as much as I used to, I love to read volumes of letters, and this book was a lovely one to discover.  When I was reading bits of a book about the summer of 1816 {as the 'Year Without a Summer,' with great climate changes all over the world due to a volcanic eruption in Indonesia two years earlier} and the Shelleys and Lord Byron's summer in Geneva, I came across some quotes from a certain Lady Caroline Capel, an aristocratic Englishwoman who was spending that summer in Switzerland. I couldn't resist looking her up, and finding this book was the wonderful result.

When her husband's devastating gambling debts came to light, it became necessary for the family to retrench, and to go abroad in search of a cheaper place to live.  The letters -- from Lady Caroline and her older daughters to Lady Caroline's mother -- begin when they eventually arrive in Brussels in 1814, with most of their twelve children, who range from Harriet {in the painting} who is 21, to Adolphus, who is a year old.  Their social circle ranges from the Duke of Cambridge {one of Queen Victoria's uncles} and Prince William of the Netherlands to a wide circle of other English expatriates and military leaders, and their letters are filled with descriptions of dinners and balls and parades on the boulevards of Brussels; at the same time, they're writing about their 'most delightful house' and the happily lower cost of meat and vegetables.

The letters were most likely published {more than a century later} because the family was in Brussels durng the Battle of Waterloo, with Caroline eight months pregnant with her thirteenth child and reassuring her mother that that they were safe there, and that none of her children had been born before their time. I remember the story of how the Duke of Wellington and many others spent the night before the battle at a ball, and even as they write home about the frightening sound of cannons, the friends they lose and the horrible ranks of wounded soldiers, there's something of that odd juxtaposition in Caroline's life, too.  Her brother Lord Uxbridge, who is honored for his heroism in the battle, is shot in the knee and loses his leg.  His aide-de-camp reports that after the operation "He said smiling:  'I have have  pretty long run, I have been a Beau these 47 years and it would not be fair to cut the young men out any longer.' "  But there is one problem:  six years earlier, Lord Uxbridge had abandoned his wife and six children and eloped with another woman.  All of the injured parties had happily remarried, 'but the social stigma ...attached itself only to the wife who had dared to leave her husband and marry another's...She was not spoken to by the respectable members of the Paget family -- at least not by the ladies; but now Caroline would have to meet her erring sister-in law and, what was worse, so would the Misses Capel.'  A few weeks after the battle, they {like many others, apparently} visit the battlefields, almost like tourists, and the house where Lord Uxbridge recovered from his wound and where his leg was buried in the back garden.

A year later, in the summer of 1816, they decided that Brussels had become too expensive, and reluctantly decided to take a house in Vevey, on the shores of Lake Geneva. There's more about  weather that summer and their ongoing domestic economies and difficulties, and accounts from the daughters of a day spent in Geneva and what seem like very intrepid journeys into the mountains.  I would, of course, have liked to spend more time with them in Switzerland, or even a glimpse or a gossip about what was going on across the lake, but the letters came to an end, much too soon, with the Dowager Duchess' death in 1817.

The very last section of the book, though, goes back to their time in Brussels and Harriet's passionate and unrequited love for a certain Baron Trip, a military officer 20 years her senior, and her letters to him don't provide the only drama ...


So far, neither her mother or father suspected the deep attachment which their daughter had formed towards Ernest, though in early February Caroline had written:  "Baron Trip still keeps his ground & and is here almost every day'; but soon (and how it came about we shall never know) some passionate communication between Harriet and the Baron was intercepted by her father; whatever it contained it is clear that Ernest was considered to have acted most dishonourably, for Caroline wrote to Lady Uxbridge on April 19th, which warranted indeed the 'Private' written at its head.
'My very Dearest & most beloved Mama
'I know reports fly quick & often with untruth or exaggeration & lest any should reach you, I write myself to say that my dear Capel has had an Affair with Baron Trip (Harriet, the Unfortunate cause) in which no blood has been spilt, Thanks be to Almighty God -- I can at this Moment enter into no particulars. You may suppose what the blame must have been to have induced so peaceable a Nature as Capel's, the Father of a Family, to have taken such a Step; the Duke of Ruchmond was his Second & has behaved in the most Perfect manner  ... Had I wanted  any thing to increase My attachment to My dear dear Capel his Conduct now would have done it. ... He had to keep us all from the knowledge of it & he did it so effectually that with all my anxiety of Mind I had not the slightest suspicion...
This Unfortunate affair took place the day before yesterday, Sunday -- He beg[g]ed me to have Prayers directly after Breakfast as he had promised he said to call on General Barnes ar 12 O'Clock to see him before his departure for a few days -- little did I think where he was going!'


There is exasperation and annoyance as well as anxiety, Harriet is sent off to stay with friends in the Hague {'Poor wretched Harriet!  How bitter had her great passion made her; but no one could accuse her of being anything but constant1'}, and when the Baron comes to a bad end, Lady Caroline writes 'In short, my beloved Mama, I almost dare to look forward to the prospect of this fine creature (tho' I say it) being one day restored to herself.'

The letters, found in family papers, were assembled and edited by the great-great-grandson of Lady Caroline's brother, Lord Uxbridge, and published in 1955. {Do you read The Persephone Post at all?  It  was (I thought) a wonderful coincidence to see his portrait in it on Thursday, just as I was finishing this book, but the distinguished gentleman turned out to be his father; his sister's portrait appeared the next day.}

The Capel Letters:  Being the Correspondence of Lady Caroline Capel and her daughters with the Dowager Countess of Uxbridge from Brussels and Switzerland, 1814-1817, edited by The Marquess of Anglesey
Jonathan Cape, 1955
Borrowed, from the Boston Athenaeum

Thank u for this interesting post. Since I live in Brussels I am always on the look out for things written about the city in the past. This is a must read, and I will try to find the letters. Letters always give an inticate touch to lives in those days.

I hope you find them, Lisbeth! It would be even better to read them living in the city (or even visiting...)

1816, the year before Jane Austen died. I'm so interested in this period of history. I would like to read this book.