Revenge in a Cold River 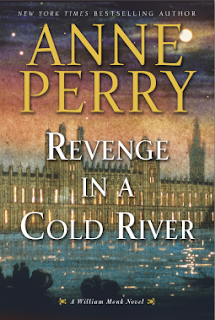 I enjoy Anne Perry's mysteries very much, both the series about Thomas and Charlotte Pitt, set in the late 1800s, and her series (this one) about William and Hester Monk, set in the middle of that century. They're consistently good: very well written, with very well drawn characters; I always look forward to the next book in these very long running series, knowing I'll enjoy them.  I'm slightly fonder of the Monks, if only because in this series the arcs that Perry writes into the lives of her recurring characters are little more dramatic.

Monk is the Commander of London's River Police, and in this book he is still reeling from a battle with gun smugglers and river pirates that resulted in serious injuries for Monk and his officers and the death of his closest colleague. Monk is sure that the River Police were betrayed, and strongly suspects that McNab, an officer in the Customs service, was involved, so he is suspicious when McNab brings him in on the investigation into the death of an escaped prisoner. The two men hate each other, but Monk doesn't know where McNab's enmity comes from; even worse, Monk realizes that McNab knows his deepest secret:  after a carriage accident thirteen years before, Monk has no memory of his early life, only secondhand glimpses of the man he was. As the investigation turns against him, he begins to know more about his past, in a very unexpected place.

Revenge in a Cold River has just been published by Random House/Ballantine Books. Thank you to NetGalley and the publisher for the opportunity to read it!

Yet another series that sounds good, but I've never read...
Glad you enjoyed the latest installment :)

I liked the one Anne Perry I read and always mean to read more of her work. Thanks for the reminder. Revenge in a Cold River sounds perfect for winter reading by the fire!

I really like Anne Perry and have read most of her books, and if not, have bought them and they are waiting to be read. She came to Atlanta years ago and I went to listen to her at the bookstore. I’d like to read the book written about her – about her own murder conviction in New Zealand when she was a teenager. Her name was Juliet Hulme but after the conviction she changed it to Anne Perry. I saw the movie about it a long time ago.