At Dusk: Boston Common at Twilight 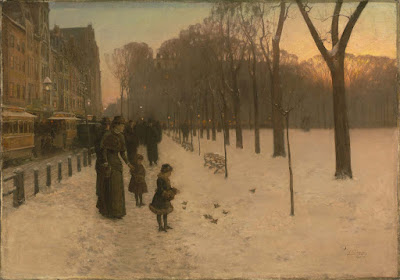 The snowfall has ended in Hassam's view, but something of its enchantment remains. The fading light casts its rosy glow, turning the snow pink and encouraging contemplation. Hassam's selection of dusk, with its traditional associations of nostalgia and longing, of the inevitable passage of time, lends his painting a calm, thoughtful air, at least to twenty-first century eyes, colors and covers over the clamor of traffic, the frenzied activiry of rush hour.

I had already known that Childe Hassam, an artist I'm always drawn to, had painted a few scenes of Boston, because I love to visit two of them {this one and this one} whenever I go to the Museum of Fine Arts.  But somehow I never realized until a few weeks ago that he was born in the Dorchester section of Boston, and that makes me even happier. :)

And so did this book.  It's essentially a 'biography' of this iconic painting, and as you might guess, anything that extends the idea of a biography into another area is wonderful to me.  {Ms. Hirshler, a curator at the MFA, has written a similar book about this Sargent painting, another favorite of mine.}
'

She tells us that At Dusk was one of Hassam's earliest paintings, and was dismissed by critics when it was exhibited in the early 1890s (it went unsold, and was finally purchased in a 'clearance sale'). For a long time, this painting, reproduced on the coffee mugs and holiday cards sold in the gift shop, seems to have been mostly a sentimental icon; in the 1970s, when it was lent to the mayor's office, 'perhaps this peaceful vision also acted as a political statement ... projecting to his guests a sense of harmony and calm during an era of political and racial turbulence.'

But what was fascinating {and surprising} to learn was how innovative, and 'modern,' this painting was for its time.  Hassam was one of the earliest artiists to paint urban scenes {in an earlier painting, he recorded his fascination with the way rain looked on the city's newly paved streets}, and his 'deliberately muted palette, with its gentle harmonies of rusts and browns' was seen as an alternative to the brighter colors being used by the Impressionists {and by Hassam himself, later}.  But as she tells its story, Hirshler writes in depth about its subject matter:  the changing nature of Tremont Street, where a colonnade of houses was being replaced by commerical buildings, the streetcars, the new, much brighter streetlights, one little girl's very fashionable fur-trimmed coat, and even the idea that it was becoming acceptable {in Boston, at least} for a respectable young woman {in her subdued dress, not engaging with the men crowding the sidewalk} to walk and linger, unescorted, on a city street.

All things I didn't know; a short, fascinating, delightful book...and now I can't wait to visit this painting again.

Childe Hassam, At Dusk:  Boston Common at Twilight, by Erica E. Hirshler
Museum of Fine Arts, Boston, 2005
Borrowed, from the Boston Public Library, and now on my bookshelf

A biography of a painting... leave it to you to find such book! :) I was not familiar with Childe Hassam before reading about him on your blog, but plan to seek out several paintings at The Met next month.

This is lovely, Audrey. I love Childe Hassam's work and I am so pleased that he painted places you know.

Stunning painting and very interesting post. I wish I knew more about art.