'I think we all feel that after the war we shall just throw away the whole bloody lot of things and never darn or mend or make do again,' Naomi Mitchison told her diary, but with clothing rationed until 14 March 1949, improvisation of one kind or another still came high on the list. Newly demobbed Joan Wyndham dyed her WAAF uniform 'a smart forest green' and enlivened it with a tight leather belt; Katharine Whitehorn and fellow students at Newnham College, Cambridge, also dyed their clothes 'when we could not bear them any longer' and relied on the college sewing machine,  the inexperienced among them crossing their fingers that the thread would not break.
My mum delighted in a neighbor's gift of a very nearly new wine-coloured coat in boucle wool. Coats are your greeting to the outside world and she was thrilled with this one and its six buttons in descending sizes, five of which I have in my button box today. ... The majority of Cora's clothes were still home-made, including, in a late flowering of Annie's tailoring skills, a full lined sand-coloured belted coat which drew compliments from those who saw it. Cora wore the coat with a pair of high-heeled lace-ups similar to those in a 1946 advertisement for Church's shoes:  'Just arriving', its shout line announces '...but still, of course, in limited numbers.' This was the message frequently dangled before would-be shoppers. 'Smart frock seen in Piccadilly - copied at home in 'Spava' fabric:  scarce but obtainable.' Utility clothing was still being being produced, although in smaller numbers; manufacturing restrictions still applied to buttons, as to so much else. ...
Wartime stringencies were still in place, but the mood had changed. ... Even as a young woman discovering adult life and with plenty to distract her, my mum observed that too:  the sense of camaraderie that had bound people together had passed on. As if to exemplify this, Modern Woman advised on 'Food for the Fed-Up.' Visiting Paris three months after the war ended, Vogue editor Audrey Withers saw


a remarkable vindication of the belief...that not only our needs but our whole outlook is determined by the way we dress. In England, we are wearing big overcoats with hoods, and flat-heeled shoes ... We wanted to be ready for anything asked of us. Paris was in a totally different situation. Occupied by the Germans, its people wanted to cock a snook at them ... They were wearing shoes with platform soles inches high, and towering hats.


With its gusts of fabric and insistence on Plenty, Christian Dior's 1947 New Look certainly cocked a snook. ...

from chapter 17, 'The Coat Button:  post-war and the New Look' 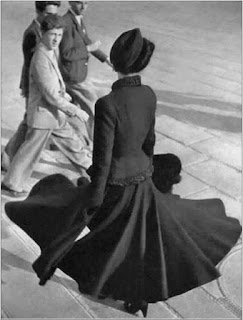 I don't remember what my own grandmother kept hers in, and I'm glad that my sister thought of taking home the stash of buttons she found in Grandma's apartment and keeping them in a big glass jar in her kitchen. After reading about this book {here and in other places}, I was longing to read it, and I had every intention of ordering it from the UK, sight unseen. {I'm glad that's becoming easier*, if not less expensive, or less tempting...} But I hesitate to buy books that I really want to read, because owning a book is the surest proof that I'll leave it unread. :) So I was so excited when I saw The Button Box, unexpectedly, on the library's new books list.  And now that I've read this book, the first thing I did was order a copy of my own. {Otherwise, I really wouldn't have been able to give it back.}

Each of the book's chapters starts with a black and white drawing of a button, goes on to describe {or imagine} the clothes on which Lynn Knight's great grandmother Betsy, grandmother Annie, great aunt Eva, mother Cora, or Lynn herself as a child, might have worn it, and then branches out wonderfully, not only into rationing and changing fashions, but also into history and fiction, war work and domestic work, wealth and poverty, children's toys and children's books, and many other aspects of girls' and women's lives, from her great-grandmother's Victorian era to the 1960s when the author (a year older than me) was growing up in northern England.

The Button Box draws in so many references to authors I love {Elizabeth Gaskell, Barbara Pym, Virginia Woolf} and to others that I've only read about {Elizabeth Taylor, Nella Last}.  As I read it, I imagined the joy of reading everything you could — biographies and memoirs, magazines and government reports, Viragos and Persephones — and tying them all together, and now I want to do the opposite — to unpick her pages and read everything the author did. This is a lovely, very readable book, the kind you can dip in to a little at a time or read all at once, with an irresistible bibliography, and I think it will be one of my favorite books for this year.

*The Button Box hasn't been published in the US but it is 'scarce but obtainable' :) from The Book Depository, or from them via Amazon. This isn't a plug for those booksellers, it's just that I think a lot of my reading friends would enjoy this book as much as I did. :)

I collected this from the reservations shelf in my library yesterday, and I am so looking forward to having the time to read.

Jane, you're one of the reading friends I was thinking of as I read it!

I loved this book, and the way it showed how women's clothes reflect their changing roles in society, and what is happening in the world around them. And I loved the way it opened up memories of my childhood, and all the sewing my mother did. I read it it while I was looking after her when she was ill, and sat and chatted to her and she remembered lots about things she sewed as a child, and stuff she did for me.