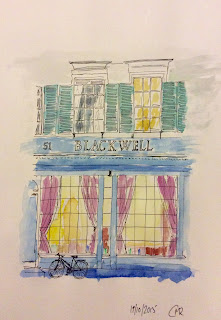 'Daphne, have you bought my new poem?'
A young man, who seemed to have been washed up to the pavement by the noisy tide of traffic in Cornmarket Street intercepted Daphne as she walked back with the others to Persephone College. He had a charming smile, an air of being well-pleased with himself, and regularly waving hair.
'How can you expect me to attend to literature -- even yours -- when our bursar has just been murdered?' ...
'Good Lord! Is it a University sensation? Will it spoil the sale of my book?'
'Really, Owen, of all the egotists -- '
'Dash it all, if your bursar's dead the fuss can't matter to her, and a little fuss about my book would matter a lot to me. Definitely you must buy it. Come along now -- you buy a copy and I'll treat you to coffee -- Oh, what's the time of day?  Tea, then. Come along.' ...
'What's the price?' Daphne inquired.
'Half a crown -- it's a gift, the poem alone, not to mention a woodcut by Jopling.'
'But no one will buy it. You know that nobody buys new books in Oxford. They'll go to Blackwell's and read it there.'
'Don't I know their charming habits? But that's provided for -- sealed copies!  And I have several trusty friends on duty in Blackwell's in the rush hours; if they see anyone breaking a seal they stroll up, disguised as one of Blackwell's assistants, and say 'sir -- or madam,' as the case may be -- 'Would you like it wrapped up? Two shillings and six pence.' Neat idea?'
'But doesn't Blackwell's mind?'
'His original idea, you know, was to run a bookshop and actually to sell books. The undergraduate population of Oxford turned the shop into a reading room, but it is believed that occasionally an elderly professor gets into a panic at the idea that he may die -- or at least become utterly cobwebbed and so immobile - before he can finish Blankenstein's ten volume treatise on The Intangibility of the Actual, and deliberately buys the book. Oh yes, they've got all the gadgets -- a concealed till, complete with change, and what not -- ' ...
Daphne paused, irresolute. 'I think I'll get it out of the Times Book Club.'
'Done again!' No copies sold to lending libraries! Such is the reluctance of the modern man or woman to buy a modern book, that they'd even take out a three months' subscription, at a cost of two half crowns, rather than take that desperate step.'
'I never realized that you were so practical!' Daphne regarded him with admiration. 'But is it really worth half a crown? Perhaps I could borrow it?'
'Daphne, you shall have a really good tea, whatever you like, eclairs unnumbered --'
'Right oh!' Daphne walked deliberately up the steps into Blackwell's bookshop. When she returned a few minutes later, Owen was mopping his brow.
'I begin to sympathize with Mr. Blackwell,' he told her. 'Now, where shall it be -- Stewart's, Elliston's, Fuller's?
'Daphne considered her choice. 'I think I feel like Fuller's to-day. Blackwell's man bore the shock very well, I thought.' 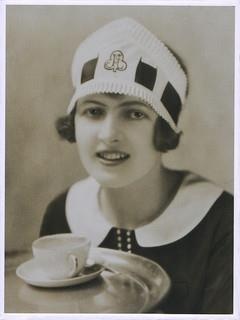 It was early for tea and they easily found a quiet table near a window. After some earnest concentration on the menu, Daphne turned her attention to the book. Dust, by Owen Vellaway, was the title, and below it, on the paper wrapper, was printed:  'You can get the best seat at the movies for half a crown and even see the picture round four times, if you can bear it, but you can't pass the seat on to your friends.  For half a crown, you can buy the most vital poem and the most significant woodcut which Oxford has produced this century, and you can read the one and look at the other as often as you wish, but if you are a gentleman you will realize that for the pecuniary benefit of the author and the artist it is essential that your friends shall also pay for their seats.' ...
'Well, if it's really a slap-up tea --'
'With knobs on,' Owen promised.

from Death on the Cherwell, by Mavis Doriel Hay (1935)