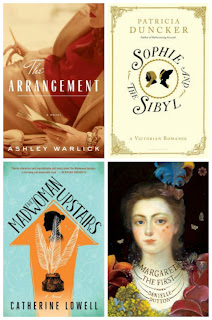 A question:  is it just me, or is there a sudden trend toward fiction based on real lives?  I'm only asking because I've suddenly found myself reading a lot of new books that fall into this category. This isn't entirely surprising, given my love of nonfictional lives, but it seems to be a little more than a coincidence.  But I like it, even if it is. :)  Would it be your cup of tea?

I've liked three of the four very much.  I wrote about The Arrangement, and though I never got around to telling you about Sophie and the Sibyl, more a mixture of fact and fiction, it was just a lot of fun to read.  I'll probably finish Margaret the First tomorrow.  I was drawn to it because of its cover, to be honest, but the writing is very rich and lyrical and the Duchess — an unconventional, prolific, compulsive writer, married to a caring and supportive nobleman who flees to Paris, then Belgium, during Cromwell's reign — is a wonderful character. {The one  that didn't work as well for me, The Madwoman Upstairs, isn't really the same kind of fictional life, because the real people in it are in the background; it focuses on a modern-day descendant of the Bronte family, an alleged treasure trove of Bronte artifacts, and (I thought) a relatively uninteresting plot interspersed with a lot of (more interesting, but convoluted) back-and-forth about the relationships among the Bronte sisters and the meaning and relative literary importance of their novels.}

So, in the end, two were about people I knew a little bit about (M.F.K. Fisher and George Eliot), and the second two weren't (the Brontes and Margaret Cavendish, the 17th-century Duchess of Newcastle).  I don't think this especially matters to me, because hopefully I'm either spending time with someone I already know and like, or sparking an interest in someone new and unfamiliar.  And all of them sent me scurrying off to note down biographies or diaries or letters that I could read someday, or soon.  I've already had Claire Harman's new biography of Charlotte Bronte on deck to read this month {it being her bicentennial}, and though I'm not planning to read the whole thing right now, I also borrowed a biography of George Eliot from the library just to see if one of Patricia Duncker's characters, the stalking Miss Simcox, was a real person.  I hope so!

I get a little grumpy about it myself - at least when it's Jane Austen having to run around and solve mysteries :) I'm trying to think of examples that I've read, but I'm coming up blank. I think I'd just as soon read a biography, though.

I think there is, Audrey. I can understand it when the lives were long ago or are undocumented, but it disappoints me when that isn't the case and a good, accessible biography might have been written instead. Or an original character created - I'm thinking of an author who uses Josephine Tey as a fictional character in a mystery series, but her name escapes me.

But the one positive thing I'd say is that in some cases a good novel with proper credit given to the real life or history can lead people to good books they might have missed. I'm thinking Louisa Treger and Dorothy Richardson, an a good book I wrote inspired by the life of Emily Hahn, here.

I started noticing this trend a couple of years ago, Audrey. It's something that doesn't sit well with me but do appreciate that if my interest is twigged I'll follow up with a biography.

I feel the same way -- it seems like writers can't make up their own characters anymore, they have to borrow characters created by other people, or take real people and "reimagine" their lives. I have a lot more respect for authors that create their own characters, though I don't mind historical fiction with characters who are clearly fictional living in actual historical times. And I'd much rather read an actual biography of someone famous than something made up -- oftentimes their own lives are stranger than fiction, like Robert Massie's brilliant biography of Catherine the Great.

And don't get me started on all the Jane Austen fan fiction, sequels, prequels, and re-imaginings.