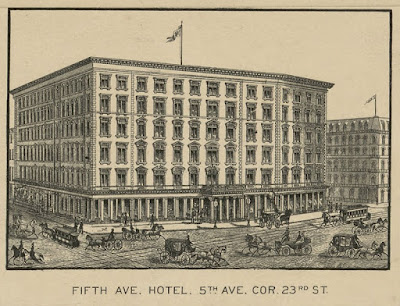 With several hundred pages of The Small House at Allington left to catch up on {and I did, finally!} I really shouldn't have even thought of pressing my nose against the window of the 1924 Club {and yet I did}. There was just something so appealing about a group of readers sharing a year, if not a book.

But there's always Edith Wharton, when you need her. After she won the Pulitzer Prize for The Age of Innocence in 1920, she looked even farther back into the New York society she emerged from to write four novellas, each one depicting a different decade of the 19th century. This one, the fourth, was published in 1924, and all four of them were gathered into a book, under the title Old New York, in that same year.

I learned all this from a favorite book, Edith Wharton A to Z, which also mentioned that some of the characters from The Age of Innocence reappear in this book, the one set in the 1870s. {After 10 months of Trollope, I love when that happens even more.} There's an appearance by gossip-mongering Sillerton Jackson, and the highly respectable van der Luydens, and an important scene at the home of the wealthy but socially questionable Mrs. Lemuel Struthers. There's also a casual but very telling mention of Fanny Ring, Julius Beaufort's mistress and later wife {at the end of The Age of Innocence, if you remember, their daughter marries Newland and May Archer's son.}

'New Year's Day' is set at the same time and in the same social circles. It begins on New Year's Day, at the home of the socially prominent, old New Yorkish Parrett family. When there is a serious fire at the Fifth Avenue Hotel across the street, visiting family members gather at the window to gawp and to look down their noses at the less classy, nouveau riche ladies who receive New Year's callers at the hotel instead of privately at home. As they watch the guests streaming out of the hotel, they are shocked to see Lizzie Hazeldean walking quickly away with a man who is not her husband.  Shocked but not surprised, because society already suspects that she is a fallen woman.

The rest of the novella tells us about Lizzie's disgraced parents, and how she is rescued by and then married to handsome, bookish Charles Hazeldean, who is seriously ill with the 'Hazeldean heart,' and how she is treated when her affair becomes common knowledge, and why Lizzie was meeting a lover, and the life she builds for herself after her husband dies. I found lots of the ideas and observations that I recognized from The Age of Innocence and The House of Mirth, but with a surprising twist that was very Edith-like.

My A to Z also hinted that these four stories aren't among her best, and I'm not especially drawn to the other three, but I did like this one.

Brilliant! Thanks for joining in! :)

Your review makes me want to rush to this story, thanks so much for that inspiration. Previously I've only read the 'big' novels