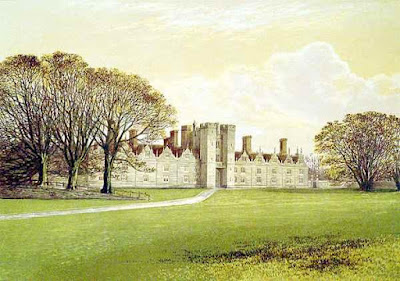 In the spring of 1901, Victoris visited Spain for the first time. Unlike her daughter, Vita, for whom the country was later to become a place of high romance, Victoria was niot favourably impressed. There was 'so little to buy', she complained, and Madrid struck her as being 'wretchedly poor'; the capital's central square, La Puerta de Sol, was very disorderly, 'full of people loafing about all day.'...
Although Spain was the land of her mother's birth, she made no reference to this aspect of her heritage in her diary. Nor did she refer in her Spanish diary to the activities of her brothers and sisters. And yet, in one of those curious near-crossings of paths, Henry was in Madrid around the same time, researching the circumstances of their mother's marriage at the church of San Millin fifty years before.
On 30 October 1901, Henry's lawyer presented the Spanish courts with a Denuncia, a declaration that the marriage records in the church of San Millin had been falsified in such a way as to support his claim of legitimacy.... If ... doubt could be cast on the marriage between Pepita and Oliva, then it might be possible to prove that Lionel as, in fact, married Pepita, and that Henry was legitimate and the heir to Knole.
The Spanish newspapers followed the Denuncia proceedings very closely, as did the press in England and France. The Heraldo was much taken with the way in which 'the fantasies of romance appear mingled with the realities of life.,' of a heroic young man from a distinguished and aristocratic English family who had come to Spain to defend his name. The Correspondencia also blamed the 'covetousness which stops at nothing' of Victoria and her husband, who had conspired to keep Henry out of inheriting Knole. Another newspaper reported  Henry's claim that he had left London for Paris toward the end  of 1898 because 'on several occasions his brother-in-law threatened to poison him'. ...
The Imparcial described how reality had 'taken the aspect of a romantic novel, recalling the boldest inventions of Alexandre Dumas', and its account, like the others, was riddled with  errors, particularly about the more distant past.

I had put Robert Sackville-West's first book, Inheritance:  the story of Knole and the Sackvilles, on my list a few years, when a lot of our blogging friends were reading it, But it might be good that this second book came my way first, because there's a chance (probably a slim one) that the first one might tell a happier, less horribly fascinating story.

The author is the 7th Lord Sackville, who currently lives at Knole, a house that has been in his family for thirteen generations. His title {and, the house, in an entail restricted to male heirs} came to him from an uncle with five daughters, who inherited it in his turn from a gay and childless first cousin. But the main story in this very indirect lineage goes back to his great-great-uncle {I think -- if there was ever a book that needed to begin with a family tree, it's this one!} This Lionel Sackville-West {there are a lot of them} was a younger son who had five illegitimate children during a long affair with Josefa Dunn, known as Pepita, a beautiful Spanish dancer who has married to another man. Lord Sackville writes that after telling the story of the ancestors who inherited Knole, he wanted to write about the ones who didn't.

Lionel tried, in some feeble ways, to support and even possibly acknowledge his children. He installed Pepita, the children, and a slighly creepy friend, Count Beon, in a villa in the South of France; later, he eventually sent his two sons, Max and Henry, to seek their fortunes as farmers in South Africa, and brought his oldest daughter, Victoria, with him to serve as his hostess when he was a diplomat in Washington, D.C.  Still, 'the taint of illegitimacy' was always with them {a theme that runs through another book I've been reading, though the end of the story is very different...}.

When Lionel's brother died, he inherited the title and the house, and Victoria became the mistress of Knole. Since Lionel's sons could not inherit, his presumed heir was his nephew, another Lionel, and {does this sound familiar? :)} Victoria's place at Knole became permanent when she married him. They were the parents of writer and gardener Vita Sackville-West, who grew up at Knole, and loved the house {more than her mother, who seemed to just covet it} but could not inherit it either. {And the grandparents of Nigel Nicolson and great-great grandparents of Juliet Nicolson, but not Virginia Nicholson, now that I have that straight. ;) }

I didn't mean to go on this long, but you almost need most of this detail to understand who everyone is and how they were disinherited.  The five siblings struggled for money, and a place in society, and depended on but also resented Victoria for the relative legitimacy that her marriage brought her (but not happiness).  The book details the long, drawn-out, headline-making and eventually unsuccessful court cases that Henry, principally, brought against his father, seeking to prove that either his mother, Pepita, was never married to her husband, which could lead to proof that she was married to Lionel, or that the relationship between Lionel and Pepita was a 'marriage by reputation,' and that Lionel's willingness, at the time, to consider them his legitimate children should allow him to inherit,

This is a family tree with many branches, and even though Robert-Sackville West is a close relative of the people he's writing about (the Lionel who married Victoria is his great-uncle), there's enough distance so that he writes as a historian interested in an old family story more than as a participant. Disinherited is very readable and well-written, and as I said, horribly fascinating or fascinatingly horrible, and has already sent me to the library for Inheritance.  Concidentally, a new biography of Vita Sackville-West that I put on reserve months ago has also come in, so when I'm not in Paris in July I will probably be spending a lot more time with the Sackville-Wests.

Your phrase "horribly fascinating or fascinatingly horrible" makes the whole thing sound pretty irresistible to me! And I, for one, definitely needed all that detail :)

It was lovely to read all of that detail, and a much needed reminder that I should take my copies of both books from the shelf.

Well that is a tangled family lineage, thanks for the untangling notes.

Confusing! I think it means I have to read this book as well. Sounds absolutely fascinating.