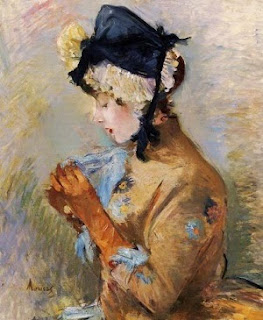 It was, we have said, the first of July, and such being the time of the year, the ladies, after sitting in the drawing-room for half an hour or so, began to think that they might as well go through the drawing-room windows on to the lawn. First one slipped out a little way, and then another; and then they got out on to the lawn; and then they talked of their hats; till, by degrees, the younger ones of the party, and at last the elder also, found themselves dressed for walking.
The windows, both of the drawing-room and the dining-room, looked out on to the lawn; and it was only natural that the girls should walk from the former to the latter. It was only natural that they, being there, should tempt their swains to come to them by the sight of their broad-brimmed hats and evening dresses; and natural, also, that the temptation should not be resisted. ...

It was only natural that, after a little too much faux-Austen, one would find oneself wandering (gratefully) back to Mr. Trollope, and being perfectly happy to read this part of Doctor Thorne again to get back into the spirit of things. I like Patience Oriel a lot; I hope she stays around for a while.  Did I read somewhere that Mr. Trollope was influenced by Miss Austen, or is that only wishful thinking?

Miss Oriel was a very pretty girl, a little older than Frank Gresham; -- perhaps a year or so. She had dark hair, a nose a little too broad, a pretty mouth, a beautiful chin, and, as we have said before, a large fortune, -- that is, moderately large, -- let us say twenty thousand pounds, there or thereabouts, She and her brother had been living at Greshambury for the last two years, the living having been purchased for him,,,during the lifetime of the old incumbent, Miss Oriel was in every respect a nice neighbour; she was good-humoured; ladylike, lively, neither too clever nor too stupid, belonging to a good family, sufficiently fond of this world's good things, as became a pretty young lady so endowed, and sufficiently fond, also, of the other world's good things, as became the mistress of a clergyman's house. ...
'Miss Oriel was saying so much in praise of you before you came out,' said Margaretta, 'that I began to think that her mind was intent on remaining at Greshambury all her life.'
Frank blushed, and Patience laughed. There was but a year's difference in their age; Frank, however, was still a boy, though Patience was fully a woman.
'I am ambitious, Lady Margaretta,' said she. 'I own it. But I am moderate in my ambition. I do love Greshambury; and if Mr. Gresham had a younger brother, perhaps, you know --'
'Another just like myself, I suppose,' said Frank.
'Oh yes. I could not possibly wish for any change.'
'Just as eloquent as you are, Frank,' said the Lady Margaretta.
'And as good a carver,' said Patience.
'Miss Bateson has lost her heart to him for ever, because of his carving,' said the Lady Margaretta.
'But perfection never repeats itself,' said Patience.
'Well, you see, I have not got any brothers,' said Frank; 'so all I can do is sacrifice myself.'
'Upon my word, Mr. Gresham, I am under more than ordinary obligations to you; -- I am, indeed;' and Miss Oriel stood still in the path, and made a very graceful curtsy. 'Dear me! only think, Lady Margaretta, that I should be honoured with an offer from the heir the very moment he is legally entitled to make one!'
'And done with so much true gallantry, too,' said the other; 'expressing himself quite willing to postpone any views of his own for your advantage.'
'Yes,' said Patience, 'that's what I value so much. Had he loved me now, there would have been no merit on his part but a sacrifice, you know --' ...
'Well,' said Frank, 'I shouldn't have said 'sacrifice;' -- that was a slip; what I meant was --'
'Oh, dear me,' said Patience, 'wait a minute; now we are going to have a regular declaration. Lady Margaretta, you haven't got a scent-bottle, have you?  And if I should faint, where's the garden-chair?'
'Oh, but I'm not going to make a declaration at all,' said Frank.
'Are you not? Oh! Now, Lady Margaretta, I appeal to you; did you not understand him to say something very particular?'
'Certainly; I thought nothing could be plainer,' said the Lady Margaretta.
'And so, Mr. Gresham, I am to be told that, after all, it means nothing,' said Patience, putting her handkerchief up to her eyes.
'It means you are an excellent hand at quizzing a fellow like me.'
'Quizzing! No; but you are an excellent hand at deceiving a poor girl like me. ... What a pity it is that my brother is a clergyman. You calculated on that, I know,or you would never have served me so.'
'She said so just as her brother had joined them, or rather just as he had joined Lady Margaretta  De Courcy; -- for her ladyship and Mr. Oriel walked on in advance by themselves.  Lady Margaretta had found it rather dull work, making a third in Miss Oriel's flirtation with her cousin; the more so as she was quite accustomed to take a principal part herself in all such transactions.  She therefore not unwillingly walked on with Mr. Oriel. Mr. Oriel, it must be conceived, was not a common, everyday parson, but had points about him which made him quite fit to associate with an earl's daughter. And as it was known that he was not a marrying man, having very exalted ideas on that point connected with his profession, the Lady Margaretta, of course, had the less objection to trust herself with alone with him.

How lovely. I read the Barsetshires many years ago & I would like to read a few of them again, I don't remember much about Doctor Thorne at all & I have a lovely old OUP edition.

Oh yes, he was a fan of Miss Austen's books! He wrote in his autobiography that for years he thought Pride and Prejudice was the best book in the English language. Then unfortunately he discovered William Thackeray. But I'm sure he still reread Austen.

Enjoy your time in Barsetshire this long holiday weekend! I've also read that Trollope was influenced by our beloved Jane... and was convinced of that by the end of Doctor Thorne.

Don't know much about Trollope (gasp!) but I do love the photo at the top of this post. So so beautiful.

Those are great passages from Dr. Thorne, which I recently read. In my blog post today I included a link to your blog, since you inspired my post (10 favorite authors).