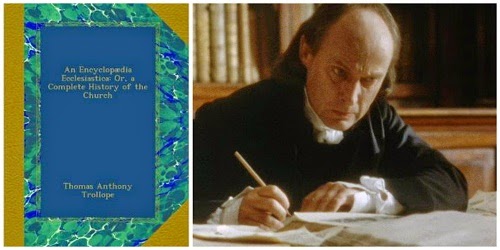 ... was half the time in bed, suffering from bilious headaches, and hours that he could spare from the farm she shut himself up in the parlour with his work.  He, like Mrs. Trollope, was writing a book. He had madly embarked on an Encyclopedia Ecclesiastica, a Church history that would explain all church terms, rites and ceremonies, and all the orders and subdivisions of monks and nuns. 'Under crushing difficulties, with few or no books of reference, with immediate access to no library, he worked at his most ungrateful task with unflagging industry.' ...
Both [Anthony and his older brother Tom], as middle-aged men, were friends with George Eliot and spent much time in her company. It is possible that their stories about their father's ambitious and doomed opus contributed to her creation of Mr. Causabon and his equally ambitious and doomed 'Universal Mythology' in Middlemarch. The dates of the Trollopes' friendship with her and of her creation of Causabon support this supposition.

from Anthony Trollope, by Victoria Glendinning

More on this later, but I have a project in mind to read or re-read the six Barsetshire novels this year in honor of Anthony Trollope's centennial ... one every two months,  Since I love to read literary biographies {as you may have noticed....:)} I started off this morning to re-read this one, and only 35 pages in, the connections between his early life {he's only fifteen} and what he wrote about are enthralling.

I was going to take note of the almshouse for 13 poor old men that was in Winchester, near his school, a place that he remembered and used in The Warden, but then there was this. {The biographer also notes that Mr. Trollope 'managed to interest the publisher John Murray in the first volume... covering the letters A (for Abbadon) to F (the Funeral Rites). It was the only volume he ever completed, and was probably accepted for his wife's sake; at the interview with Murray, to which Mrs. Trollope accompanied him, the publisher showed much more interest in her future as an author than in his.'} I just loved it.

I loved that biography so much, it really brought Trollope to life for me. And I am so excited about the bicentennial. I just haven't decided what books to read yet, or to re-read.

Lisa, it will be great to have your company during the celebration! I've planning on the Barsethires, but what I read in this biography about Lady Glencora Palliser has me wondering whether I should change my plans. :) It's definitely bringing him to life for me too.

The biography is now high on my list of priorities for after the TBR dare. Barsetshire is calling me and I am close to the end of the Palliser series but I also want to read some standalones for different counties.

You will love Lady Glenora ....

Fascinating. I'm torn between wanting very badly to read this biography and thinking I ought to read more by Trollope first. Either route will prove delightful, I'm sure!

Another book to add to my TBR list -- and now I think I want to buy it. Which edition did you read?

I'm also thinking about hosting some kind of Trollope event, maybe in April -- the 24th is the 200th anniversary of his birth. Have you heard about any other online events?

I haven't heard of any read-alongs, etc. but I'm sure there will be some. I've been meaning to finish the Barsetshires for a while so the bicentennial is a great reason to finally do so. :)

An excellent project idea and perfect timing, too! I read The Warden years ago and have entertained the idea of a quick reread and then continuing with the series.