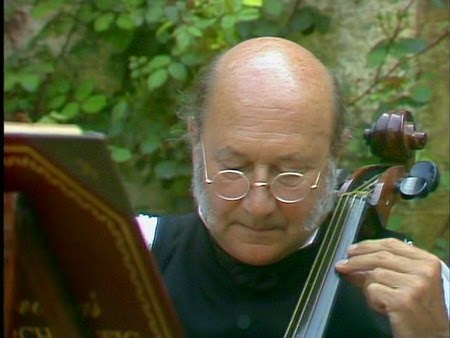 The Warden, a short novel, is like a musical theme played on a solo instrument -- a violoncello -- at the beginning of a concerto. ... No one hearing the theme for the first time has any notion of the variations and developments, the changes in mood, place, and dynamics, or the complexity of texture that will come with the complete orchestral work. As Anthony Trollope himself later understood, Barchester Towers would hardly be so well known as it is had there been no Framley Parsonage and no Last Chronicle of Barset.'
Each novel in the Barchester sequence, like each glimpse of a familiar Barsetshire personage in novels outside the sequence, adds to the meaning of what has gone before. In life outside books we know some friends, or enemies, intimately for a while, and then the ways part. We hear about them, with sudden intense curiosity, or see them unexpectedly -- older, and changed -- years later.
It is like that in the world of Trollope's fiction.  People who will be central to the parliamentary sequence or in other later novels are first glimpsed, their significance unrecognised (even, sometimes, by their creator) in the Barchester novels. It is not the chronicles of Barset that make up a great concerto, it is his work as a monumental whole.
[But] In 1855 [when The Warden was published], no one knew that this was how it would be. ...

from Anthony Trollope, by Victoria Glendinning

But this is my idea of heaven, reading-wise, and after reading this, my plan to read and re-read all of the Barsetshire novels this year has just turned into a longing to read and re-read them, together and all in a row, just to feel this happening. :)

I'm so happy to see that others in our reading circle are also planning to read some Trollope this year, and I'm looking forward to hearing about it. If anyone is interested to reading along with me, somewhere along the way, of course I would love that too.

And The Warden introduces one of my favorite characters, Mr Harding. I love meeting him again in the later stories.

I think I will join you. I've been wanting to re-read Doctor Thorne and The Small House. But I will probably catch up with you in April, when the TBR Dare is over.

The Warden is my least favorite of the Barset novels, but I think it's really worth reading them in order. Barchester Towers is just delightful and it makes much more sense if you've read The Warden already. And I just LOVED Doctor Thorne.

A calender year of the Barsetshire Chronicles is a lovely idea. I wish I'd thought of that with the Pallisers novels! I have five of the six left and I really hope to finish them all this year.

I wasn't wild about The Warden when I read it a decade or so ago, but am planning an audio reread. Whispersync could be a huge help with this project!

I have Doctor Thorne on my Back to the Classics Challenge list this year. I might not be able to stop there!

As a late arrival to your party, I must tell you that I stumbled onto your site via a Trollope search (Google: Trollope blogs), and I must also tell you that I am so intrigued by what you and others have to say about Trollope that I think I will join the challenge. My copy of The Warden has been downloaded to my Kindle, and I am ready to begin. Now, excuse me while I return to my blog (Beyond Eastrod) and announce my Trollope reading decision. Let's keep in touch via our blogs. v/r R.T.

Lory and RT, we'll be very happy to have you! If you're tweeting, we made a hashtag: #6barsets

I've read the entire series three times over the course of my life and think it is the finest literary series ever written - at least that I've read. I'm only waiting a decent interval of years before reading again. The books continue to improve with rereading.

I just got an email from audible asking if I was ready for the next book in the Barsetshire series, Framley Parsonage. Have we got the order wrong, or are they confused?

I think the answer is "both"! I looked on the Trollope Society site and a couple of other places, and it looks like we're good so far, but I may have gotten 4 and 5 wrong -- Doctor T, then Framley P, then The Small House, then Last Chronicle. I'll see if I can confirm about FP and TSHaA, but there seems to be consensus on the Doctor.