Paris through a attic 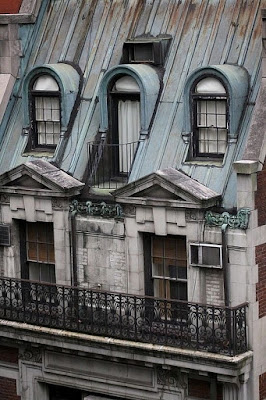 The stone houses of Paris have wide doorways and polished staircases and always at least six stories. The second and fifth stories are surrounded with a stone balcony finished with a wrought-iron railing, and all the long, narrow double windows, which open inward, have outside Venetian shudders, which shut back against the wall every morning with a harmonious bang...
... a fixed line is drawn at the sixth story or rather at the one call the sixth (which may even be the seventh or the eighth), for the sixth story in houses of this type is not divided into the usual three sets of flats like those below, but consists of separate rooms nominally belonging to the flatholders and theoretically used as bedrooms by their servants. Therefore, though all of the five stories below can visit one another on equal terms, the inhabitants of the sixth are beyond the pale. ... Polite society, though daily suffering maybe from the presence of a sixth floor above its head, ignores its existence, except to complain of its manners to the concierge downstairs. And even the friendliest of hostesses will wonder naively after the first shock is over, 'What is it like up there?'
I always said in answer that there was a great deal of air...

I don't remember how or when I first heard about this book — possibly a year or two ago when I typed 'Paris' into a search engine to find something to read for Paris in July.  I do think that I probably borrowed this book because of the author's name alone.  Isn't 'A. Herbage Edwards' a great name?  Do you imagine a fussy little man wearing glasses?' I did.

Mais non.  I could find almost literally nothing about this book, or the author, online, except for a short notice in The Spectator, dated April 1918, that begins 'Two students, a man and a girl, having a capital of 140 pounds, decided to marry and pursue their post-graduate studies at the Sorbonne for two years. This lively book shows how they did it, living the simple life in two attic rooms at Mont Parnasse...'.  The author, as it turns out, is the young Mrs. Edwards. {I couldn't even find her first name anywhere, in the book or online. She is better known, at least online, for a book of 'Japanese sketches.'}

It was even a little difficult, at first, to tell when these two years took place, but from things that are mentioned in passing, it must have been in the first years of the 1900s.

The sixth-floor flat that they find is tiny, two rooms with a view:


Our house was the corner house of the street and one side of it faced the Boulevard and our flat was the corner of the corner, with one window of it actually set in the flattened angle of that corner and looking across the Boulevard down the long length of the street opposite, over the houses and the chimney-pots and the space of faintly moving green which was the Luxembourg gardens...
Paris lay beneath us, the masses of its houses and its roofs. We looked from south to north across the wide width of the city, and there on the extreme northern limit of the town, beneath the clear of an autumn sky, rose up the Sacre Coeur, immaculate in its new-born whiteness. The grey roofs stretched from me to it, a broken lake of colour. Above, the freshness and the peace of autumn was in sky and air...
When we turned at last to look at one another each knew our quest was ended. Thirteen pounds a year, and this at our window!

The book begins with pages and pages about furnishing the flat, with remnants from Bon Marche and second-hand beds and chairs, along with a long list of everything they bought and what they paid for it, and chronicles of the daily housekeeping and shopping for food at the weekly market, followed by a detailed menu of what Mrs. Edwards served for lunch and dinner for weeks on end. {I think if she were writing today, her book would have started out as a blog -- the kind which has a recipe one day, a DIY project the next, and a photo of the newly decorated living room the next.}  As they settle in, we're introduced to their American neighbors, the young and relatively well-off Mr. and Mrs. Boston, and to the Parisians that they meet, from the kindly butcher at the market, to the gentle and welcoming Madame Martin, to their third-floor neighbor, Madame Weinstein, who teaches Mrs. Edwards, by example, about 'the art of domesticity' ...


... The fact of our having married as we had to start off and do it seemed so foreign, so English, so utterly un-French that the intellectual curiosity of her nation was instantly arrested by it. And the spectacle of a married woman on the threshold of life in a 70-pound a year menage without so much as a knowledge of how to cook eggs went to the softest spot in her housekeeper's heart. What she could do to avoid the inevitable shipwreck of such a position should be done.

Both Mr. and Mrs. Edwards are students, so the book turns next to the buildings and the lectures at the Sorbonne, and the cafes nearby, and then to 'Sundays and Holidays,' spent in walks (and bicycle rides) in different neighborhoods and out to the 'semicountry.' an adventurous early morning visit to Les Halles and an excursion to Versailles, and at the Louvre  almost every Sunday in winter, then wondering along the quays with their booksellers...


To wander along the quays was an absorbing occupation, not only for the sake of the find when it came, but to me for the queer little bits of reading that I got by the way. Passionate scenes from forgotten novels, three verses of a poem, quaint little bits  from books that only figure in histories of literature, odd facts from all the sciences, excerpts from school class-books, and amid the drab of text-books, the sudden colour of a page...redolent with the sunshine and the scents of the 'midi,' which I would have to spell out slowly as a strange new tongue. ...
How many hours we have spend wandering happily down the quays intent on turning over and over the discarded books of others' libraries, in search of what we wanted and could at all afford for our own ... however tired or hungry or late, we would agree to stop 'just a minute' and awake presently to find it was an hour. We had the University library for serious planned-out reading, but sometimes I wonder if I have not got as much, in breadth anyway, from these desultory, interrupted, bee-like settlings among the book boxes of the quays. I got acquainted with such an immense variety of authors and such an extended miscellany of facts.

{Her blog would have posts about the books she is reading, too, obviously.}

Other parts of the book are more serious and scholarly, with Mrs. Edwards' observations on French literature and theater, and on how the French view marriage and family life. I read this book in a  'desultory, interrupted' way over the summer, and enjoyed it very much. Paris through an Attic is probably one of those 'books that only figure into histories of literature,' and not evenly barely that, but it reminded me, again, that I'm very lucky to have a university library where I can find books like this, for less-than-serious, not especially planned-out, reading. :) 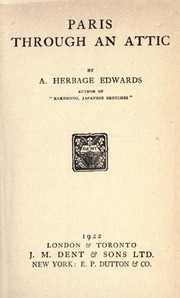 Paris through an attic, by A. Herbage Edwards
J.M. Dent & Sons Ltd., 1918
Borrowed from the college library
Noted under: Homes and Haunts, Letters, Paris in July

What a gem! You really are lucky to have such a wonderful university library at your disposal. If she had a blog today, I'd be reading it :)