For Elizabeth von Arnim, on her birthday 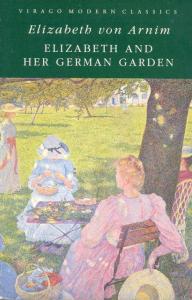 September 15. — This is the month of quiet days, crimson creepers, and blackberries; of mellow afternoons in the ripening garden; of tea under the acacias instead of the too shady beeches; of wood-fires in the library in the chilly evenings. The babies go out in the afternoon and blackberry in the hedges; the three kittens, grown big and fat, sit cleaning themselves on the sunny verandah steps; the Man of Wrath shoots partridges in the distant stubble; and the summer seems as though it would dream on for ever. It is hard to believe that in three months we shall probably be snowed up and certainly be cold. There is a feeling about this month that reminds me of March and the early days of April, when spring is still hesitating on the threshold and the garden holds its breath in anticipation. There is the same mildness in the air, and the sky and the grass have the same look as then; but the leaves tell a different tale, and the reddening creeper on the house is rapidly approaching its last and loveliest glory.
My roses have behaved as well on the whole as was to be expected...

from Elizabeth and her German garden, by Elizabeth von Arnim

It's always a joy to read one of the authors in Jane's Birthday Book of Underappreciated Lady Authors, especially when the book I choose is one that has been on my list for a very long time. I loved The Enchanted April, and reading about Elizabeth von Arnim, and though this book is a gentler, milder, less fully-fleshed book, it's a delightful one. {My PBS station has been running the early seasons of Downton Abbey on Sunday nights, and this is the book that Molesley uses when he tries to woo Anna.}

In this first novel, published in 1898, the fictional Elizabeth {like the real one, I think} persuades her German husband to live in and let her replant the gardens at their long unused country home, and the book is a year-long chronicle of what she plants, and her young children, and the neighbors who cluck over her, and her endearing and not-so-endearing houseguests.  It also portrays her fictional husband as jovial and loving, and given to outbursts, but perhaps not as nice as he seems ...


... By the time the babies have grown old and disagreeable it will be very pretty here, and then possibly they won't like it; and, if they have inherited the Man of Wrath's indifference to gardens, they will let it run wild and leave it to return to the state in which they find it. Or perhaps their three husbands will refuse to live in it, or to come to such a lonely place at all, and then of course its fate is sealed. ... Mothers tell me that it is such a dreadful business finding one husband; how much more painful to have to look for three at once! -- the babies are so nearly the same age that they only just escaped being twins. But I won't look. I can imagine nothing more uncomfortable than a son-in-law, and besides, I don't think a husband is at all a good thing for a girl to have. ...

There's questioning of the social order, and of women's place in it, mixed with wonderful descriptions and colorful characters, and impishness as when Elizabeth takes her guests on a picnic by the sea ...


Every paradise has its serpent, however, and this one is so infested by mosquitoes during the season when picnics seem most natural, that those of my visitors who have been taken there for a treat have invariably lost their tempers, and made the quiet shores ring with their wailing and lamentations. ... The sudden view of the of the sea from the mossy, pine-covered height directly above it where we picnic; the wonderful stretch of lonely shore with the forest to the water's edge' the coloured sails in the blue distance; the freshness, the brightness, the vastness -- all is lost upon the picnickers, and made worse than indifferent to them, by the perpetual necessity they are under of having to fight these horrid creatures. ,,, It has, however, the advantage of being a suitable place to which to take refractory visitors when they have strayed too long, or left my books out in the garden all night, or otherwise made their presence a burden too grievous to be borne; then one fine hot morning when they are all looking limp, I suddenly propose a picnic on the Baltic. I have never known this proposal fail to be greeted with exclamations of surprise and delight.
'The Baltic!' You never told us you were within driving distance? How heavenly to get a breath of sea air on a day like this!  The very thought puts new life into one!  And how delightful to see the Baltic!  Oh, please take us!' And then I take them.

This was a lovely book to curl up with, and I'm looking forward to seeing what others have read, because I know there are more books by EvA that I'll want to read.


Elizabeth and her German Garden, by Elizabeth von Arnim
First published in 1898
From my bookshelves and audiobook collection

This has been on my list from the moment I finished The Enchanted April. Can't imagine why it's taking me so long to get a copy and start reading. I'm planning to start The Prime Minister later this weekend... can't wait to get back to Trollope's world!

I really enjoyed Enchanted April and have been meaning to read this as well. I definitely enjoy gardening books, and having spent all weekend working in my own garden, am even more interested. Sounds like a leisurely read for the winter.

Lovely extracts! I think I read this many years ago, but this has reminded me to revisit it.