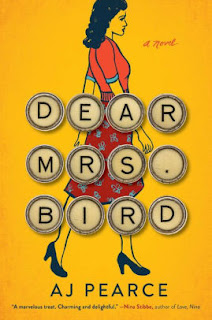 I was planning to spend all this month reading about Paris, but when this book came in at the library I could not resist. I know I put more books on hold than I can possibly read, and then they all always come in at once, and I'm very sorry but I GAVE IN.  It was very pleasurable, though, and I was able to keep it close to me on the bus all week ...

Mrs. Bird, who writes the "Henrietta Helps" column,  would be horrified at the very thought of answering my letter, because it contains UNPLEASANTNESS ('pleasurable' is on her list of trigger words), but fortunately the magazine has hired a new junior typist who may not be able to resist trying to help.  Emmeline (or Emmy) Lake is a young woman. living in London during the Blitz, who dreams of becoming a war correspondent.  She types documents at a solicitor's office by day, answers calls the Fire Brigade at night, and shares a flat and all her secrets with her best friend, Marigold Tavistock (known to everyone as Bunty).  When she answers an ad for a new part-time job, she thinks she will be on the first step of her career as as reporter, but finds instead that she is typing correspondence for the large, loud and redoubtable Mrs. Bird, the Acting Editress of Woman's Friend, a languishing magazine.  She stoutly refuses to answer most of the letters that come in, the ones that ask about That Sort of Thing, and generally tells other readers to Pull Up Their Socks and Get On With It, but Emmy sympathizes with the letter writers and wishes someone would really help. You can probably guess what happens, and that's where much of the plot, and the heartwarming part of this book, comes in.

But there's also heartbreak:  Emmy and her childhood friend William, who is engaged to Bunty, fall out when she expresses her fears over the risks he is taking as he rescues people from bombed-out buildings, and the war that they have been witnessing comes much too close to them.  I did really read this book as I was going back and forth to work on the bus, and found myself caught up in the story -- thanks, I think, to the lively and well-drawn characters more than to the plot, but a very good first novel and a lovely bit of reading in any event. :)

I have been waiting for ages for this book. I kept checking our libraries with no luck. Seeing your post reminded me to check again, and they finally have it - and the waiting list isn't too long.

I've been hearing about this book, it was on a list in our local bookstore's newsletter of best books selected by indie bookstores. I will look for it.