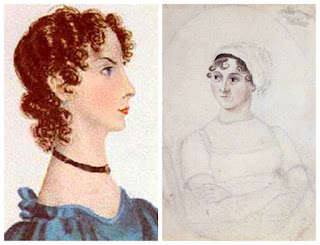 ... Another novelist Anne probably discovered while at Thorp Green was Jane Austen. Charlotte famously hated Austen; 'the Passions are perfectly unknown to her', she said ... But Anne's writing has often been compared to Austen's/ They both value reason and wit, balance satire with empathy,; they both try to make their heroines happy. And in Agnes Grey, Anne both echoes and questions Emma.
In Austen's novel, two governesses are saved by marriage. Jane Fairfax is saved before she even has to try 'the slavery' of governessing. But Miss Taylor has been Emma's governess for sixteen years before she gets caught in drizzle one day, a man fetches an umbrella and soon they are walking down the aisle. Anne might have questioned Austen's penchant for sending her heroines out into bad weather to find men -- as Anne was forever getting bad colds, this might not have been her most efficient strategy. I think that she also felt there was more to Miss Taylor's story than Austen was telling. She remixed it in Agnes Grey, signalling what she was about by giving Agnes' suitor the same name as Miss Taylor's; they are both called Mr. Weston.
Miss Taylor's marriage is supposed to be true love, but is it really?  Her pupil has outgrown her, and she must be wondering how long she will be kept on as a paid companion. Maybe she doesn't want to uproot herself after sixteen years in one place. Maybe she knows, anyway, governesses have a shelf life, and she'll find it hard to get another job. Maybe fear drives Miss Taylor into the drizzle, and maybe that's why she lets herself be rescued.  Marriage is her exit strategy. Anne was careful nor to make it Agnes'.
Agnes' Weston is a gentle, overworked curate. He has just lost his mother; his rented rooms don't feel like home and he had 'nowt to live on', but he still sends the poor widow Nancy Brown a sack of coals for her cold storage.  He is full of common sense, firm faith and unaffected sweetness. Oh, and he has a deep, cleat voice, a lovely smile, and he preaches well. I have quite a soft spot for Weston myself. In a riff on Austen's umbrella scene, Anne describes Rosalie and Agnes leaving church in heavy rain. They have begun a silent battle for Weston's affections. Rosalie is a dog in the manger; she doesn't want Weston, but she doesn't want anyone else to have him either. As they leave church, she haughtily sets off for the carriage, under the footman's umbrella, leaving Agnes to get drenched ... and then Weston appears with an  umbrella!  Agnes is so flummoxed that she says no thank you, she doesn't mind the rain. 'I always lacked common sense when taken by surprise,' comments the older Agnes, mouth twitching in amusement. Luckily, Weston walks Agnes to the carriage anyway, which puts 'an unamiable cloud upon [Rosalie's] pretty face' -- as if she has made the rain herself, and hoped it would soak her rival.

from Take Courage:  Anne Brontë and the art of life,
by Samantha Ellis


Love this {and this lively book, in general} ... I thought I'd be saying I'd only be interested in the biography, and not her novels, but I'm changing my mind.  Have you read Agnes Grey and/or The Tenant of Wildfell Hall?  Did you like them?  I haven't gotten to Emma yet, in my re-reading of Jane Austen, but I'm goiing to look more closely at Miss Taylor when I do.


Noted under: Biography, Jane Austen, Only Connect, The Brontës

I listened to both Anne books earlier this year. I liked them both. I don't think she is as good a writer as Charlotte (based on my reading Jane Eyre only) but her stories are compelling. The Tenant of Wildfell Hall really deserves much more attention than it gets.

That's the whole premise of this book --that Anne deserves more attention, in general! I;ve been convinced! :)

Anne definitely doesn't get the attention she deserves! I loved The Tenant of Wildfell Hall and highly recommend it. Agnes Grey is good, too... much shorter, and more autobiographical. I think you should read them both :)

I've just finished reading Agnes Grey for my book group; I'd never made the connection with Mrs Weston in Emma - but yes, it absolutely falls into place. How fascinating.

What a wonderful post! I have never read Agnes Grey, but I found the comparison to Austen's Emma fascinating. Interesting thought about Anne reading Austen and her perhaps more favorable view of Austen than Charlotte's famous rant (which I always attributed a bit to hurt pride on her part).

I loved your comment about sending women into bad weather as a way to meet men.

Love Agnes, not so keen on Tenant of Wiauldfell Hall. I suspect Anne was the Bronte sister who enjoyed Jane Austen!