Together and Apart, for Margaret Kennedy Day 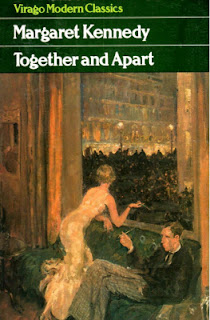 Dearest Mother,
I'm sorry the Engadine isn't being a success, but I'm not surprised. Why on earth did you trust the Gordons to choose a hotel?  You might have known better. How is father's lumbago? For heaven's sake don't go on sleeping in damp beds till you both have pneumonia. Move to somewhere more comfortable. You are both too old to go camp out in mouldy little inns. ...
Well now, Mother, listen. I have something to tell you that you won't like at all. In fact, I'm afraid that it will be a terrible shock and you will hate it at first. But do try to get used to the idea and bring father round to it.
Alec and I are parting company. We are going to get a divorce. ...


We are so lucky that we have friends like Jane who introduce us to new writers and help us celebrate them...it's thanks to her that today is Margaret Kennedy Day, and that I've now read and enjoyed four of this lovely writer's books. Although I'd forgotten, again, that I read this one before, years ago, which is not surprising since this Virago edition has been on my shelves forever.

Together and Apart is the story of a marriage that falls apart, and of how a family falls apart along with it. Betsy Canning {who is wonderfully horrible} is disappointed with her husband, Alec, who has given up a respectable civil service job to write lyrics for popular operettas; his work brings them money, but it also brings a circle of friends and a position in society that (to Betsy) are not quite respectable, and Alex has also had an affair.  The Cannings have agreed on a plan for Alex to 'abandon' Betsy and give her the evidence she needs for the divorce, but their plans come undone when Alex is asked to work on a new production about Lord Byron, and stays at home instead. The rest of the novel tells us what happens to them, to their teenage children, to their mothers, to lovelorn, eccentric Lord St. Mullins (my favorite character), and to a beautiful young poor relation who they've made beholden to them, as they all spend the next few months together and apart.

Reading Together and Apart reminded me that one of M.K.'s greatest strengths, in my view, is in how she draws her characters. From the very first page, when Betsy tells her mother in a letter that she is planning to divorce Alec, we have a strong sense of who she is, and M.K. stays true to this for the rest of the book. Whether we like them or not, or think they're sympathetic or worthy or not, they definitely come to life.

M.K.  has a similar gift for setting the scene with short but vivid descriptions of landscapes and houses. I wish I had noted down more passages, because her writing is often lovely, and sometimes heart-catching.

Alec waiting at the top of the path for Eliza, who was some way behind. He had noticed, or thought he had noticed, that she had dropped back on purpose. Probably the boys had been snubbing her.
On former holidays she and Kenneth had been allies, and Daphne had had to play second fiddle. But, since the arrival of Mark, Eliza had been cast off. Her days were full of small rebuffis and disappointments, so that Alec, who saw it all, was often sorry for her. She had still a child's trustful unawareness of situation. ... Every morning, she would prepare to enjoy herself, undeterred by the fact that she had not done so on any previous day. Later she would be tagging along a little behind the others, bewildered and glum, but quite prepared to be happy if only they would allow it. ...
Fat, earnest, hopeful Eliza would change, inevitably, into a woman whom he did not know. He was sorry, for he liked her very well as she was. Of the three she was the only one who meant very much to him. The other two belonged to their mother entirely. But she had caught at his heart when she was but an hour old; they put her into his arms, and she stared up at him as if expecting him to tell her what on earth had been happening. She still looked at him like that sometimes, giving him a spasm of tenderness and compassion. ... This sentiment assailed him now as he watched her toiling up the slope in pursuit of a brother who did not want her. When she reached the top he told her to wait and rest for a little, while he lighted his pipe. They flung themselves down upon the warm turf, and gazed at the chain of lakes below. The mountains, dappled with cloud shadows, swept back from this high valley. Their own lake, Llyn Alyn, had a small island floating on its silvery breast. Neither of them could view this prospect often enough. ... Little was left for all their greedy gazing -- a mere memory of light and airy space, of colour so soft that it escaped the inward eye as does an image seen in a dream.
They were both thinking this, and presently Eliza said:
'Do you think that it's true that Nature never did betray the heart that loved her?'
'Lord, I don't know!' said Alec. 'Who says so?'
'Wordsworth.  We did him last term. It's his philosophy of life, you know. One of those quotations you have to work into an essay. ...'


All of this, and her gentle humor, are the things I often hope for in a book, and am so happy to find in hers. 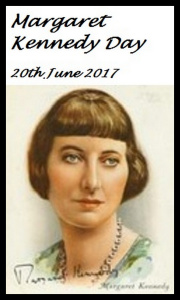 Together and Apart, by Margaret Kennedy
Virago Modern Classics, 1982 {first published in 1936}
From my shelves

Ahhh I forgot it was Margaret Kennedy day. If I'd remembered earlier I might have had a better day than I actually did!
Thanks for the warm feels💜

A lovely review and a lovely choice of quotations. Thank you for reminding my why I first fell in love with Margaret Kennedy's writing, and for being part of MK Day again.

This sounds like another wonderful book by an author I have yet to read... you continue to tempt me!

This was one of the first of her books that I read. I loved the shifting points of you, and the sections in letters. But overall this wasn't one of my favorites.

I love the cover of this book! Sometimes I'm really shallow when it comes to picking books, and I'll end up buying one just based on how much I like the cover.