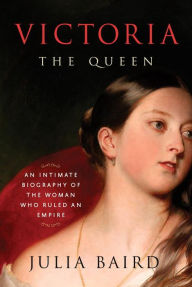 When speaking of her greatest desires, the word Victoria repeated throughout her life was 'simple.' She wanted a simple life. She eschewed corsets, and was primarily concerned with comfort. (She had rolled her eyes at the 'new fashion of very tight gowns' in 1867.) The queen was happiest at Glassalt Shiel, a tiny, isolated Scottish cottage in the 'lovely wild & haunting country' of the Highlands. As G,K. Chesterton wrote not long after her death, her 'defiant humility' sat at the heart of the empire:  'No one could deny that she stood, for the humblest, the shortest and the most indestructible of human gospels, that when all the troubles and trouble mongers have had their say, our work can be done till sunset, our life can be lived until death.' That was true. But though her humility was defiant, her defiance was not humble.

As you might have guessed, for me, this new biography of Queen Victoria is something I'd look forward to, times two, and I did, and it was everything I hoped it would be:  intelligent, detailed, very readable, and written by a biographer with a gift for storytelling.  There's also a particular focus on letting us see her personality, her foibles and all of her very human contradictions, alongside her persistence, her intelligence, her strengths of character and her 'unbending, steadfast presence.' And reminders that her family and historians have censored or rewritten or mythologized a lot of what she wrote and what she accomplished. {It was also great fun, I admit, that one of the revelations in the book is the delicious 'snippet' that Julia Baird found in the family-held papers of Sir James Reid, Victoria's trusted doctor, about a conversation he overheard between the queen and John Brown. {'Much has been been lost. Which is why even the faintest new shred of information can tell the loudest story.'}. As someone who loves to read biographies, I always love glimpses like this into the research and writing process.

I was lucky enough to have an early peek at this book, thanks to NetGalley and Random House, and I would recommend it to anyone who's intrigued, or more intrigued now, about Queen Victoria.  I'm enjoying the Masterpiece series, as I thought I would, even though the more I read about her, it paints a very different and slightly silly picture.


Victoria the Queen:  an intimate biography of the woman who ruled an empire, by Julia Baird
Random House, 2016
Source:  NetGalley, then purchased

I am reading this right now. Victoria was a fascinating woman, wasn't she? I agree with the description of the book as "intelligent, detailed, and very readable."