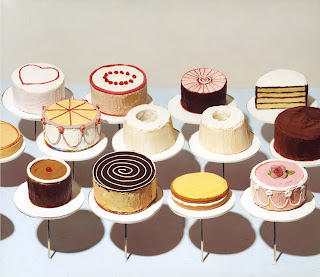 Today, as decreed by our friend Jane, is Margery Sharp Day, a day that certainly deserves many cakes and more than one Martha. :)  After reading (and adoring) Martha in Paris last July, I celebrated all this past week by finally (finally!) finding out what happens to this wonderfully-drawn character before and after her eventful year there.

Being someone who's addicted to series mysteries, I'm always so happy to find the Thirkells and Trollopes and other fictions that work this way, too, and normally I'd try to read them in order, but in this case I started in the middle, then went back, and then went forward.  It didn't seem to matter: Martha was so well formed that meeting her as a fledgling artist, then a child, then a famous painter made perfect sense. In Martha in Paris, Martha's mentor decides that it's time for the blunt, stolid, socially awkward, brilliant, and incredibly delightful 18-year-old to study in Paris, where she spends a year before returning to England and leaving more than memories behind for Eric, her almost-fiance. After reading it, I was sure that I would go directly to Martha, Eric and George, because, honestly, who wouldn't?

But I'm glad I saved that book to read as a special treat someday because that automatically means that it would be months before I did :) ... and that gave me a chance to read The Eye of Love first and anticipate the last book for just a little longer.  Eight-year-old Martha is a self-sufficient orphan, who's been raised by her devoted but slightly dismayed Aunt Dolores,  Miss Diver is middle-aged and financially struggling, but in the eyes of Harry Gibson, her lover and protector, she is a Spanish Rose, and in her eyes, her kindly, blunt Harry is a king.  When Harry finds it necessary to sell the struggling fur business he has inherited to Mr. Joyce of Bond Street, and to marry Mr. Joyce's spinster daughter Miranda, Dolores is reduced to taking in a lodger, and Miranda accepts that Harry has a Past, but decides to find out a little more about her.  Everything works out in fairy-tale fashion, but with delightful humor and a lovely insistence that the eye of love shows us something very different than what other people can see.

As I was reading, I had fun trying to remember whether it was Miss Diver's gold-digging lodger or the kindly Mr. Joyce who sends Martha to Paris (and happily I didn't peek), but happily it was the latter, and he remains a stalwart friend and supporter in the last book. Martha is eighteen when she spends her year in Paris, falls into a relationship with Eric and his mother's bathtub, and then decides that she owes it to her aunt and her mentor to return to England, stopping on her way to the Gare St. Lazare at the apartment building where Eric lives with his very British mother.

Martha, Eric and George begins an hour or so later, when Eric, a hopefully-rising young man at a British bank, is waylaid by the concierge when he arrives home, as usual, for lunch.


'Eric! breathed Mrs. Taylor, 'Whose is it?'
Actually the question was superfluous. It is an accepted if inexplicable fact that an infant during the very first wees of its existence may show a marked resemblance to one or the other parent. In this case, the tiny countenance now revealed was an uncanny, crumpled miniature of Eric's own. It simply looked much older:  an image of Eric in toothless senility, -- Not that the latter more than glanced:  by this time he was ... sure.
'It's mine all right,' agreed Eric Taylor.
'They were the first words he had spoken, and at least explicit. He still realized something more to be required.
'It was left,' Eric added.
In his very accents of ten minutes earlier --
'Left?' repeated Mrs. Taylor.
'At the lodge. -- There's an envelope.'
'With trembling hands his mother found and unpinned and opened it. It was a positive relief, faced by Eric's unnatural vagueness, to get something in writing. She put on her spectacles, prepared for two pages at least (probably tear-stained) of contrition, remorse, humility,but above all of information ...
In fact, the envelope contained nothing whatever but a feeding formula.
Mrs. Taylor looked on the back; not a line, not a word. It was as though not only all explanation, but all proper emotion as well had been -- handed over.
'Eric,' said Mrs. Taylor, through trembling lips.
'Yes, Mother?'
'You'll really have to tell me, dear. All.'
'Yes, but I've got to be back at the Bank,' objected Eric.

Mrs. Taylor is devoted to her grandson, only fretting that they will need Martha's cooperation to ensure that he will be British and not (horrors!) French, and Eric dutifully tolerates George, even though having an illegitimate son stalls his career and prevents him from marrying the librarian he meets years later.  Meanwhile, Martha is painting in the British countryside, becoming renowned as a painter and sought-after as a teacher; ten years pass, and then Martha returns to Paris for her first show there.

In reading these two books, I was reminded how skilled Margery Sharp is at drawing her characters. Sometimes, it's because they resolutely remain themselves {'Ten years had in fact altered him very little; his narrow frame hadn't filled out much, his features were no heavier, nor any more decided. It is a decade, from twenty- to thirty-four, that commonly brings a man to maturity, but perhaps not if he lives with his mother...'}; other times, it's because they reveal something surprising, and in Martha, at least, wonderfully, it's a little of both.

I read the Open Road Media editions of these books, happily available through my library, but since people really responded to the vintage cover of Martha in Paris, I went in search of the other two...

I greatly enjoyed all three books, but I think the second one will always be my favorite, because it was there that I first met Martha. :) 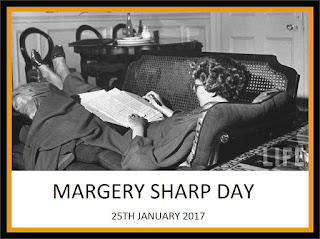 Thank you so much, Jane, for inviting us to another wonderful party!

The Eye of Love and Martha, Eric and George, by Margery Sharp
Open Road Media, 2016 (originally published in 1957 and 1964)
Borrowed (as e-books) from the library

I was a little worried when you started out in the middle of the trilogy, but things seemed to have worked out rather well. I am so pleased that you loved Martha too, and that you were able to come to the party again this year.

Glad reading these books out of order worked out... that aways makes me nervous! I finally downloaded The Nutmeg Tree, but didn't manage to read it in time for the party...