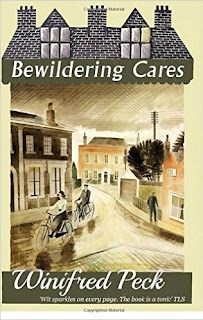 But the difficult side of the question is this:  does one make people happier necessarily by making them more comfortable?  Because it is our business, presumably, as servants of Heaven, to inspire not only comfort but serenity and hope in the lives around us. ...
I had meant to discuss all this with Arthur, because he always sees some side of any given question which I have ignored, but as I entered the cold, darkened hall I heard voices in the study, and, I feared, angry and protesting voices. While I stood hesitating, Kate's head popped up at the basement stairs, her cap well on the back of an agitated perm, and her voice came in a dramatic stage-whisper.
'They're at it in there, all of them, ovcr the Strange business. That shuffle you meant to make of the rabbit won't do. I'll stew it up and keep the pudding hot, though if you ask me I'd say those apples were more fit for a pig-tub than for apple-charlotte.'
So a meal of some sort anyhow was ready, and over-ready, when I at last heard the sound of people rising and chairs scraping back in the study, and voices exchanging curt and chilly farewells. Two calls at the door had filled in the time, as one man was drunk and wouldn't go, and the other in search of a job which asked apparently no skill and no credential.
Arthur came in looking o exhausted that I went to the book-shelf and took out Mr. Mulliner Speaks.  I propped this against the water-jug for him, and Wild Strawberries by Angela Thirkell, which I have read thirty times already and will probably read thirty more, against the loaf for myself. There is nothing so good for worried people as to read at their meals, and funny books, if possible, for laughter grows so rusty in war time. It wasn't till we were settled by the study fire over coffee that he looked up at me and laughed a little. 'We are to be martyrs for our opinions, Camilla dear! Mr. Weekes brought a message from  Mrs. Weekes that, all things considered, we had better not go to lunch with them on Thursday. They want to consult with the Archdeacon alone!'
'What a good thing I didn't get myself a hat!' was all I let myself say, though I could have said much, much more.

I confess that I am cheating, because a few days ago, I listed my favorite books from 2016, and said very confidently that I was sure that nothing else I might read in the last few days of December would possibly belong on the list. But that was before I started reading this one, and on Saturday I decided that I'd just leave a page or two for Sunday morning so that it would the first book I finished reading in 2017.  But I couldn't, I just couldn't. Besides, if the very first book you (ahem) finish reading in January ends up on your list of favorites twelve months later, that's a very good thing. :)

Camilla Lacely is a middle-aged vicar's wife in a small town in England, in the very early days of World War II.  Her husband Arthur is thoughtful, intelligent, and devoted to her and his flock; their only son, Dick, is funny and irreverent, has just enlisted. When Camilla receives a letter from an old school friend, asking her what she, and her life, are like now, she writes about her week in her diary to help her remember what she might tell her.

Her week is filled with small 'bewildering cares,' like cooking and finding presentable clothes and helping her neighbors, and with the 'storm in a tea-cup...but then we happen to live in a tea-cup!' that's unleashed when the curate, Mr. Strang, preaches a sermon about  pacifism and upsets everyone. Camilla is drawn into endless horrified discussions, which she tries to avoid because she had fallen asleep in church and didn't actually hear what he said. She's also a reader, escaping into her favorite books and bemoaning the fact that instead of following a housekeeping 'system,' as the village busybody insists she should, she's often tempted to curl up with her library book instead.

That's only one of the reasons that I loved reading Bewildering Cares, as I did exactly that. :) The writing was gently funny, but also thoughtful, especially when Camilla tries to reconcile serious spiritual questions with the small but real concerns of daily life. The introduction writer also compares Bewildering Cares to Angela Thirkell and E.M. Delafield (and she might have added Barbara Pym and Elizabeth Gaskell, in Cranford), but I especially liked (and agree with!) the review she quoted (from the time) about Winifred Peck being a modern-day Anthony Trollope.  If you love any or all of these writers, or have any bewildering cares to escape from, this is a wonderful book.

{Bewildering Cares is one of the first books from the new Furrowed Middlebrow imprint that our friends have been talking about. I didn't make the connection at first, but Winifred Peck also wrote House-bound, one of the first Persephones I read.}


Bewildering Cares, by Winifred Peck
Dean Street Press, 2016 (first published in 1940)
Borrowed from Kindle Unlimited (but immediately purchased so I could keep it!)

I'm looking forward to this... as soon as I can turn off the airplane mode on my kindle ;-)

I can't wait to hear what you think!

Great excerpt! Can't wait to read this one. Thanks! :)

Everything I've heard about this makes me certain I'll enjoy it! I also really liked House-Bound.

This really must stop, Audrey. I've just tucked my credit card back into my wallet from one purchase, added another to my wishlist, ordered a book from the library, and now you go and do this!

This was the first book I read this year. I thoroughly enjoyed it and I highlighted the passage you quote here. I will definitely be looking for a copy of House-bound.

Love that cover and anything that compares with E M Delafield has my vote.