A year with our Jane: sudden burst no. 1 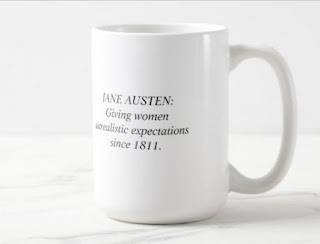 So, one day in early January, I quietly decided that I would try to re-read, or re-listen to, all six of Jane Austen's major novels, during this year that marks the 200th anniversary of her all-too-early death ... just to celebrate her and remember all the pleasure her books have given me. I really just want to enjoy reading them, and to remember a moment or a turn of phrase that I had forgotten or to revisit something that I remember.  Or maybe there would be a surprise or two, or any of the things Frank Churchill looks forward to.*

I've started with Sense and Sensibility, and have gotten to Chapter XIII.


Their intended excursion to Whitwell turned out very differently from what Elinor had expected. She was prepared to be wet through, fatigued and frightened, but the event was still more unfortunate, for they did not go at all.

This is the scene where Colonel Brandon invites the Dashwoods and the Jenningses and Willoughby to go on a picnic, and then has to dash off to London in a panic when a messenger arrives with a letter. {Elinor expects to be miserable, btw, only because it has been raining for days beforehand.}  At least that's what happens in the movie. Of course, you'd need that kind of drama in a film, but it was fascinating to read it as written.


While they were at breakfast the letters were was one for Colonel Brandon, -- he took it, looked at the direction, changed colour, and immediately left the room.
'What is the matter with Brandon?' said Sir John.
Nobody could tell.
'I hope she has had no bad news,' said Lady Middleton. 'It must be something extraordinary that could make Colonel Brandon leave my breakfast table so suddenly.'
In about five minutes he returned.
'No bad news, Colonel, I hope,' said Mrs. Jennings, as soon as he entered the room.
'None at all, ma'am, I thank you.'
'Was it from Avignon? I hope it is not to say your sister is worse.'
'No, ma'am, It came from town, and is merely a letter of business.'
'But came the hand to discompose you so much, if it was only a letter of business? Come, come, this won't do, Colonel, so let us hear the truth of it.'
'My dear Madam,' said Lady Middleton, 'recollect what you are saying.'
'Perhaps it is to tell you that your cousin Fanny is married? said Mrs. Jennings, without attending to her daughter's reproof.
'No, indeed, it is not.'
'Well, then, I know who it is from, Colonel. And I hope she is well.'
'Whom do you mean, ma'am? said he, colouring a little.
'Oh, you know who I mean.'

There's no dramatic thundering off on horseback as his friends watch in bewilderment ... instead, there's a long exchange with the Colonel being stiffly polite and Mrs. Jennings being insufferable ('If you would but let us know what your business is...we night see whether it could be put off or not') before he says his farewells and goes.

Hmmm.  Having read the book, and certainly having seen the movie, I knew that Colonel Brandon has an unexpected past, and I remember him revealing it to Elinor when he warns her about Willoughby.  I didn't remember, at all  -- though it makes perfect sense, and is in character -- that the Jenningses knew about it, and that Mrs. Jennings reveals some of his story long before he does.


The complaints and lamentations which politeness had hitherto restrained, now burst forth universally, and they all agreed again and again how provoking it was to be so disappointed.
'I can guess what his business is, however,' said Mrs. Jennings exultingly.
'Can you, ma'am?' said almost everybody.
'Yes, it is about Miss Willliams, I am sure.'
'And who is Miss Willliams?' asked Marianne.
'What? do not you know who Miss Williams is?' I am sure you must have heard of her before. She is a relation of the Colonel's, my dear; a very near relation. We will not say how near for fear of shocking the young ladies.' ...

So Marianne and Elinor are told, very early on, that the unmarried and very upright Colonel has a daughter. But a minute later, Sir John sweeps back into the room, Marianne and Willoughby ride off alone together in his carriage, and none of the characters reacts to Mrs. Jennings' gossip more than to say 'Indeed!'  Surprising! and now I'm fascinated by how this will all play out later.

* -- But you will be ready to say, what was your hope in doing this? -- What did you look forward to? -- To any thing, every thing -- to time, chance, circumstances, slow effects, sudden bursts, perserverance and weariness ... {from Emma}

What a lovely idea, Audrey. I'm looking forward to following your progress and I might even follow in your footsteps.

What a perfect time for this project! Already anticipating all your wonderful posts. I was thinking about rereading Persuasion sometime this year.

I like your idea of rereading Jane this year, think I will too. I'll never be able to read Colonel Brandon though without hearing Alan Rickman's voice.

There's a definite upswing in the amount of Austen material being signed out at the library lately. I worked last Thursday night with a colleague who grew up in India (we always talk far too much) and we had the best time talking about the universal appeal of Austen's books. Then, right on cue, a woman came up to the counter with Pride and Prejudice...we clued her in to why we started laughing.

What a lovely idea. I read Sense and Sensibility last year, but did not like it. The least enjoyable of her books I think. I live all the rest, except maybe Emma! I just read All Roads Lead to Austen by amy Elizabeth Smith, and really enjoyed it. Review will follow. She went on a trip to South America, arranged groups to discuss Austen. It just shows that Austen has something for everyone?

Good luck with your quest.