The Mistresses of Cliveden 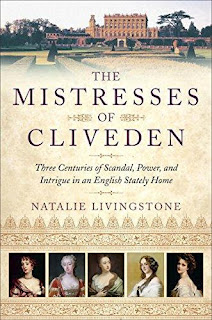 Five biographies, linked to an English stately home ... I''m sure this book went on to my list the minute I heard about it. Still {this happens a lot}, I hesitated to start it until I could really spend time with it, and in the end I'm glad I did, because it was a wonderful book to sink into.

This is just my limited knowledge showing, but one of the things that surprised me was that Cliveden wasn't the family seat of one noble family for centuries, in the Downton-esque mold. Instead, the house was bought, sold, leased, rebuilt, redecorated and rescued by a series of owners whose connections were formed by their place in the English aristocracy, and often through the social and/or political positions they held at court.

This isn't an unbroken story {there are decades and generations in between}. The story begins with a duel, fought in January 1668 between the 11th Earl of Shrewsbury and the 2nd Duke of Buckingham, over Anna Maria Talbot, Shrewsbury's wife and Buckingham's mistress. At the time, Cliveden, or Cliffden, is an estate on the banks of the Thames, not far from London, with a pair of hunting lodges and a well-stocked deer park, and the Duke planned to transform the estate into a 'grand love nest...hunting by day, dancing by night.' for his affair with Anna Maria. The earl is killed, and Anna Maria and Buckingham start their lives together in a menage a trois with Buckingham's wife,  Mary, with Anna Maria's position as a court mistress contrasted with Mary's as a courtier's wife. {Mary's story is more understated, but she is a very interesting figure, and arguably the actual mistress of Cliveden...}. After a series of political intrigues and a growing sense of scandal, the House of Lords orders Buckingham and Anna Maria to have no further contact with each other, and in the end, although Buckingham completed his work on Cliveden, Anna Maria never lived there.

The second story focuses on Elizabeth Villiers, almost coincidentally the Duke's second cousin. Elizabeth was famed for her intelligence and gift for conversation, and was first a lover and then a confidante of William of Orange.  In gratitude for Marys assistance in supporting a political transition, Willliam arranged an introduction to George Hamilton, the Earl of Orkney, and a marriage that began as a 'straightforward trade:  Elizabeth could offer George financial stability, while George could provide her with respectability ... a standard arrangement for a time when the absence of love was not a bar to marriage.'  Still, Elizabeth 'found contentment' with her husband, and the couple bought Cliveden shortly after they married, from Mary, the Dowager Duchess of Buckingham, working together on a substantial redesign of Cliveden and turning it, in time, into a family home. {I had not known much at all about this period in British history, so I enjoyed learning, really for the first time, about the reigns of William and Mary, then Queen Anne, and later the first two King Georges, through Elizabeth's presence at court. We're also introduced to Sarah Churchill, the first Duchess of Marlborough, a wonderful figure in her own right.

The next mistress is Augusta, the wife of Frederick, Prince of Wales, the heir to and estranged son of George II, who together created a second, rival court for the 'king-in-waiting' and leased Cliveden as a country retreat from Elizabeth's daughter not long after her death. Frederick died before his father, leading to the accession of George III instead; I had enjoyed reading about these figures and their family relations in Janice Hadlow's excellent book last year, and it was interesting to meet them again in a story told more from their point of view.

Cliveden reverted to Elizabeth Villier's daughter, and then her granddaughter Mary, who resisted a request to sell it to George III as a country retreat for his large family.  The house was almost completely destroyed in a fire in 1795, and was eventually sold in the 1820s.  In 1849, it was purchased by George Leveson-Gower, the 2nd Duke of Sutherland, and his wife Harriet as a domestic retreat for Harriet after years of family tragedies and stressful intrigues at court.  I think she was my favorite of the five women who were profiled; born into an aristocratic family of her own, she was married at sixteen to a man 20 years her senior, had eleven children, and became a society hostess and a close friend and Mistress of the Robes to Queen Victoria.

There's another fast-forward to the last mistress, Nancy Astor, who received Cliveden as a wedding gift at her marriage to William Waldorf Astor in 1906.  The Astors turned Cliveden into a hospital during World War I, before Nancy's historic agreement to run for Parliament in 1919, when her husband inherited his father's title and was reluctantly elevated to the House of Lords. I found this section a little less interesting, but only because the others were newer faces. The five stories are book-ended by the Profumo scandal in the 1960s, when the Prime Minister, visiting Nancy's son for a dinner at Cliveden, met and began an affair with a young woman who was also involved with an alleged Russian spy.

The Mistresses of Cliveden is well-researched, and well-written, and Natalie Livingstone does a wonderful job of bringing all of the figures she writes about to life {as you might guess, in lieu of a family tree, the five-page cast of characters at the beginning was very appealing to me. :)}  Another example of why biographies about people I've never heard of {three out of five, anyway...} can be one of my favorite things to read.


The Mistresses of Cliveden:  three centuries of scandal, power, and intrigue in an English stately home, by Natalie Livingstone
Ballantine Books, 2016
Source:  As mentioned above, I received galleys of  The Mistresses of Cliveden first from NetGalley and then from LibraryThing, in exchange for writing about the book, and I greatly appreciated the opportunity to read it.

Sounds fascinating! I can see why you saved it until you could give it your full attention. Strange (but wonderful!) to think that biographies about people you never heard of can turn out to be some of the best :)

This is my kind of book. Always interesting to read about old houses and their inhabitants.