Virginia Woolf & the Raverats: a different sort of friendship 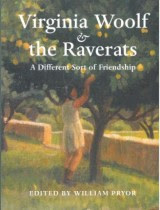 My dear Jacques,
As I was eating my muffin in bed this morning in came an exquisite crate from the South of France filled with flowers of every colour & smell, which I frantically tumbled on the bed to see who could have sent them, & there was your card! I assure you it brought the tears to these hardened eyes of mine, that you should have thought of me. And I was just writing ti you (a thing I enjoy doing thoroughly, for I write to no one else now) to say that if you'd really like it, I'll send out proofs of my novel [Mrs. Dalloway], which has just arrived, on condition you don't bother to write to me about it,  or even read it; & don't mention it to anyone for fear we should be asked for it, & it won't be out till May. For no other human being in the world would I do this -- why, I don't know. But I'm a little morbid about people reading my books. ...
Well, this is all very rambling; merely a gossip & I don't suppose you realise in the least how the flowers coming from you, on the eve of my birthday too, pleased me. There they are, against my painted walls, great bouquets of yellow & red & pink. They rather remind me of all your quips & cranks, & sitting by the river at the Grange, when you made me smoke one of Sir George's cigars -- & I so much wanted you to admire me, & thought I was a desolate old stick compared with the younger generation. ...
Let me see your memoirs, & send me any scraps of a letter you like to dictate to that dear old creature Gwen.
Yrs ever
VW


Letters, Virginia Woolf, Bloomsbury, art, France, an introduction to people I didn't know, and a glossary {!} of people and places, all in a book found in the library, by chance. This lovely {and literally, physically lovely} book ticks all my boxes.  And I can 'count' it for #woolfalong, and for Paris in July {France, at least}. :) But most of all, for the joy of reading letters again, something I used to do all the time and have greatly missed.

Gwen Raverat (the editor's grandmother), a renowned painter and woodcut artist, was the granddaughter of Charles Darwin {this, I'm learning, was such an interesting family...}; her father and VW's were good friends, and Virginia would visit the Darwins at home when she went to Cambridge to visit her brother Thoby.  Later, she studied art in London and became an early member of the Bloomsbury Group. Jacques Raverat, also a painter, who 'came from an unusual French family,' studied at Cambridge but was already beginning to feel the effects of an illness that turned out to be multiple sclerosis. After Gwen and Jacques married, they eventually moved back to Vence, in the south of France, for his health, and most of the letters in this book were written when Virginia and the Raverats renewed their friendship, by letter, beginning in the 1920s.

The letters, in themselves, are wonderful.  {This book is also filled with their art -- Gwen's paintings and woodcuts, and Jacques' landscapes -- which is beautiful.} As he became increasingly ill, his were dictated to Gwen, with small asides that she added, and Virginia and Gwen wrote to each other as well. They gossiped {Virginia mostly}, remembered disagreements and slights and forgave them, and talked about writing and painting.

My dear Virginia,
I am writing to you now, first because I like it, & then because it's less trouble than trying to remember what happened 15 or 20 years ago. It all seems on looking back, so infinitely complex,  it's so difficult to sort out the threads. ... I was interested in Roger [Fry's] apprecition of my pictures. Of course I like praise & a few years ago a little encouragement would have helped me & meant a great deal to me. I suppose I had to find my own way in pride & isolation, but believe me, it wasn't because I shouldn't have liked success ; and I think I wasted a great deal of time. I should like Roger (& you to see my latest work. It's 100% better than anything he can have seen. I ought to have 20 or 30 years work ahead of me, & instead of that, now ...
I am glad the flowers pleased you, but its a little early yet, & I wish you could see the wild flowers in April & May & June up in the hills. ...
We are having a visit from Eily [Virginia's friend, now married to Gwen's cousin]. I know you prefer Bernard -- a mere Darwin -- but I love Eily very much.  She is wise & mellow & humorous & tolerant, & she has warmth of heart & a lightness of touch, unsurpassed, which are very endearing qualities. Perhaps she is not very clever, but then there are such a lot of clever people,  that it doesn't seem to me so important as it used.
We talked about you a great deal, as you can guess, & we agreed on one point,that you were probably, of all the people that we both knew, the happiest. But how can one tell about a person one hasn't seen for so many years, I wonder if it's true; and I wonder if you think it's true. It's, in my mind, a great compliment, let me tell you. ...
Goodbye dear Virginia
Jacques

P.S. Feb 9th
I wrote this at intervals during the last fortnight & was just going to send it off; & now your letter has come & your book. Almost it's enough to make me want to live a little longer, to continue to receive such letters & such books.  I don't know how to thank you. I am flattered (& you know how important an element that is in one's sensations) & proud & pleased & we've already read the first 40 pages of Mrs. Dalloway. How tiresome that we can't talk. I should so love you to be autobiographical & egotistical & indiscreet ...

And how lucky for us that they wrote letters, instead, and that we can read them, too.

There's a wonderful NPR interview with William Pryor, here. And then there's Period Piece, Gwen Raverat's memoir of growing up in Cambridge, which I knew about vaguely but now can't wait to read. Have you?

Such a wonderful find, Audrey! Your excerpt makes me want to pour a cup of tea and settle in with the book. I bought another slim edition of some essays and memoir by Woolf that I'm dying to get into but it's just going to have to wait a month or two. One of the essays is called 'Am I a Snob'...it can only be fascinating!