Murder on the Ile Saint-Louis 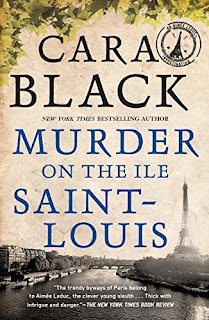 Aimee slid into the warm night. She saw white wavelets hitting the opposite bank of the Seine.  Flooding threatened if the thaw kept up.
She'd lived here most of her life, yet the neighbors in her building were only nodding acquaintances. Not one was someone to go to for help. Of course, she was aware, as they all were from the concierge, that a retired doctor of L'Ecole de Medecine lived on the first floor with his dog. An actor and his family resided on the second floor. An old aristocrat owned the top-floor pied-a-terre, handed down through the generations.  Hers had been inherited from her grandfather. God knows she couldn't have afforded to buy a place on the Ile Saint-Louis on her earnings from Leduc Detective.
Along the quai, a few lit windows, like eyes peering into the darkness, showed in the hotels partciuliers,  narrow limestone-arcaded town houses with delicate wrought-iron balconies and high arched entrances. ... She knew other worlds existed behind the massive carved entry doors leading to double- and triple-deep courtyards and gardens that could never be glimpsed from the outside. Life on this island took place in the courtyards, in the hidden back passages that had changed little since medieval times. The Ile Saint-Louis was a feudal island fortress, its fortifications the town houses built for the aristocracy. Five bridges spanned the comma-shaped island, which had once been a cow pasture in the Middle Ages. It was eight blocks long and three blocks across at the widest,yet so self-contained that long-time Ile Saint-Louis inhabitants - Ludoviciens -- still referred to the rest of Paris as 'the continent.'  Stubbornly reclusive, the inhabitants ignored the tourists, aware that they inhabited the most desirable streets in Paris, keeping themselves to themselves. They were proud of having allowed a post office to open only a few years ago, of having neighbors like a minister or two and like the Rothschilds, whom one was unlikely to visit to borrow a cup of sugar. Who was she to criticize?  She'd never live anywhere else.
A woman in trouble wouldn't knock on the Rothschilds' door in the middle of the night. Was that why she'd been chosen?


I'm not especially drawn to edgy modern mysteries, but I've read and enjoyed several of the books in this series about Aimee Leduc, a 'computer detective' living and working in Paris, sometimes for Paris in July.

The newest book, Murder on the Quai, is waiting for me at the library, and it promises to tell us more about Aimee's background.  {I was laughing earlier today when I saw a tweet from Martha Stewart Weddings about books to take on your honeymoon, and it was the one recommended for Paris. Yes, these books definitely give you a feeling for Paris, but then again there's nothing like a nice romantic murder...}

But I was drawn to this one in the meantime, because it's set on the Ile Saint-Louis, one of the places I remember best from when I went to Paris {walking across the bridge near Notre Dame, having breakfast in the cafe on the corner there, the narrow streets lined with those tall houses, and a little shop that sold French jams and teas to take home} and because of the plot. While she is working in her apartment, trying to finish some client work on a tight deadline,  Aimee receives a phone call from an obviously terrified woman, pleading for help and begging Aimee to go to the courtyard in her building. When she does, she finds a newborn baby wrapped in a beaded denim jacket.  When a group of protesters gathers at a reception, where an oil company, suspected of polluting, is about to announce an drilling agreement with the French government, their peaceful protest erupts into violence, and  as she searches for the baby's mother, Aimee discovers that the danger she is in may be connected.

An edgy mystery softened by Paris, and by Aimee's growing attachment to the baby girl and the hints she receives about what may have happened to her own mother, who disappeared when Aimee was a child. And a suspenseful one, which at the end I couldn't put down. Cara Black is very good at evoking the city, and although I didn't necessarily remember the street names and which bridge was which, I definitely felt a little bit of a familiar sense of place.


Noted under: Mysteries, Paris in July

I have Murder on the Marais, but I haven't read it yet. Like you, I enjoy a good mystery as well as a nostalgic trip, albeit vicariously, to Paris. Glad to know you liked this one, and I look forward to "meeting" Aimee myself. And you said you hadn't read much for Paris in July; you're doing as well as I am. :) xo

I love the 'Paris being the continent' bit and this is enough for me to want to read it. Sounds like a nice summer read. I will look into her books. Thank you for the tip.

Every time I read one of your mystery posts, I think I should make time time to read them more often. They always sound so appealing!

I just saw that you were going to read a new book by Cara Black – I hope it will be better than the one I read. I had great hope to enjoy the book, but being French, and from Paris, it just did not sound true. For example I think she has a naming problem – she would use, as last name from French people, names of little towns and also of French commercial brands, that have never been known as last names. As if a French author would write, in French, a mystery taking place in Washington, DC, and would have a Mrs. Albuquerque just met John Pepsi who was talking with his friends Bob Pampers and Ronald Kleenex, and then Alice Tampax came along. Do you see what I mean?

So, for someone who is French, it reminded you all the time that this was a fiction book and was very annoying. Another thing she would drop some French words or sentences that just did not ring “true” to my French ear. Nobody but a foreign person would say that. I also remember that in one scene where A. Leduc visited a French police station in Paris around the holidays, the police staff was eating little canapés while the Marseillaise was playing, softly in the background. Absolutely no way! La Marseillaise is our national hymn; no one would have it playing softly in the background of a party, and above all not the French Police! This is ridiculous. I saw that she gets good reviews from American and English readers but very bad ones from francophone readers – here is one I just saw : “Et Voila! Quelle catastrophe! Non! Non! “ I don’t even have to translate it. Many of her books had very negative comments from French readers saying her Paris is not authentic, and at the same time good ones from Americans, saying it reminded them of Paris. She also had a book with Russian people in it and I saw that a Russian commented that the names were wrong, as well as what the Russian would say. But, I guess for tourists, maybe her books with all the French clichés sound like the real thing. I would never try to write a book on New York, even though I have been there many many times - I would be afraid not to get the ambiance right, that somehow my French mind would misunderstand little nuances, like she does, constantly, with Paris.