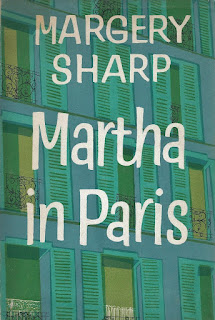 'She's only eighteen, Mr. Joyce! Do you really think that at eighteen -- '
'Just the right age,'  said Mr. Joyce briskly.
'And she doesn't speak French!'
'She will,' promised Mr. Joyce. 'I have just the billet for her -- widow of a professor, daughter who's a school-marm, not a word of English between them. Martha'll learn French all right.'
Still Dolores hesitated. Actually it wasn't Martha's lack of the parley-voo (as Harry would have put it) that chiefly troubled her; nor did she fail to appreciate the widow-and-daughter aspect. Before marriage, once forced to take in lodgers herself, as an experienced landlady Dolores at once recognized, in that particular set-up, a guarantee of respectability. But Martha, in Paris, would be attending an art-school as well; and of the few French phrases Dolores knew la vie de Boheme happened to be one...
'What I really mean--' persisted Dolores; and hesitated again. For what she really meant, to put it crudely -- and though no nice woman would, it was something any nice woman naturally thought of  -- was that in Gay Paree Martha might get raped. Not sordidly and horribly, of course, not in such dreadful circumstances as one read of in the Sunday papers, but after some gay party when they'd all been drinking red wine. 'What I mean,' said Dolores delicately, 'is that she might come to harm ...'
She blushed as she spoke. Mr. Joyce regarded her thoughtfully.
'I shouldn't think it likely myself,' said Mr. Joyce. 'She must weigh close on ten stone.'
At which moment, Martha appeared.


Ooh la la. In the books I'm reading {rather randomly} for Paris in July, all I really need is some Parisian atmosphere, along with good writing or a good story.  Atmosphere-wise, there's enough {an art school, a park bench in the Tuileries Gardens, and the apartment of a distressed gentlewoman and her spinster daughter, who take in boarders}. As to my second requirement, since this one is by Margery Sharp {another writer that I've discovered with great thanks to our friend Jane}, I had high hopes, and I was delighted, every minute.  {It's a short book, only about 160 pages, and one of the funniest I've read in ages.}

As this book opens, Mr. Joyce is making an accustomed Saturday-night visit to the Gibsons, who have lovingly raised Martha, their orphaned niece. Martha is now eighteen, an art student with a particular gift for a kind of abstract drawing, and Mr. Joyce, who has taken a paternal/art patron-ish interest in Martha, has arranged for her to study in Paris. There are hints, on the very first pages, that there's something unusual about Martha,a girl who 'always looked her best immediately after a hot bath,' and who always says exactly what she thinks. {Are you watching The Tunnel?  She reminded me of  Elise, the French detective... while I'm digressing, I also think the actress who plays her, Clémence Poésy, has one of the best French names ever.}

It's kind of wonderful when you find fairly one-dimensional characters and you wouldn't want them any other way ... Martha, Eric {the young, marriage-minded English bank clerk, living in Paris with his mother, who Martha meets on that park bench}, her landlady, Madame Dubois, and her daughter Angele {my name in 7th-grade French class}, who breathlessly follows what she thinks is Martha and Eric's great romance.

'I'm not supposed to speak English.'
'You've been speaking it to me.'
'And I'm sorry for it,' said Martha gloomily.
What a tender conscience she had! And how flattering to Eric's starveling ego that she'd wounded it for him!
'If you like, we'll all talk French,' he promised.
'I might pick up a bad accent,' countered Martha.  -- Why didn't she say outright that she wasn't coming simply because she didn't want to?  Her mistake lay in having entered into argument at all. Martha, perceiving this, was in fact about to rectify the situation, and as forthrightly as possible -- the phrase 'not if you paid me' actually forming on her tongue -- when Eric pressed on.
'Anyway, I'm sure you'd like to see our flat,' he urged. 'Mother's done wonders with it. The bathroom's just like at home.'
He spoke more appositely than he knew. As has been said, the one thing that discontented Martha in the rue de Vaurigard was the bath. What with the flakes of enamel adhering to her behind and the water never running quite hot, she hadn't had a proper lie-down-and-soak in weeks.
'Is it constant hot water?' she asked enviously.
'Constant,' Eric assured her.  'Mother had a whole new system put in.' -- He wasn't disconcerted by this new turn in their conversation. Amongst all the other virtues he'd projected on Martha was that of domesticity.
'Is the bath vitreous?' asked Martha.
'If you mean is it a sort of china, yes,' said Eric. 'Pale green.'
Her defences pierced at last --
'What time on Friday?' asked Martha.


This is a major turning point in the plot; I'd hate to give anything else away. :)

The best thing of all is that Martha in Paris is the middle book in a trilogy {The Eye of Love tells us what happened before, and Martha, Eric and George tells us what happens ten years later}. All three are among the Margery Sharps just published as ebooks, though I'm trying very hard to hold out till they come in from the library.

I am adding this to my reading list. I found a copy online. I'm not supposed to be buying books, because I'll be packing up books soon, but the combination of the cover and your post Did Me In.

Totally worth it, I promise!

My fingers are crossed that your library finds you the other books soon. The first book is a delight, and was my introduction to Margery, and having read this book you will know why the third book is essential.