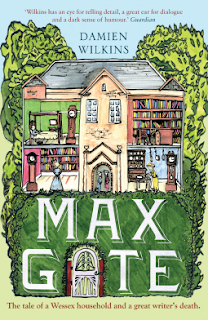 Meanwhile, at Max Gate, we are waiting, trying to live the normal day. But if everyone in a house gets up and yet there's still one who can't, then it's impossible. ...

I don't remember where I first heard about Max Gate, the novel, but there were pictures of Max Gate, the house, in The Writer's Garden, and books with houses always draw me in. Or maybe I'm just convinced that fictionalized lives have a place in my my reading life. :) In any event, I was very happy to be offered an advance copy from Gallic Books, via NetGalley.

Look up on the doorstep before going in and what do we see? Red bricks, bushy creepers, tangled ivy. Windows chopped into small panes. It's a fine house, respectable, hard to clean, cold, damp, cold. Mr. Hardy doesn't believe in conveniences. He's old-fashioned. Or just old -- yet he was always this way. His father and brother made the house, he liked to say this often, touching the brick. Proud. But Mrs. Florence told me they argued so much that the father and brother vowed never to work for Tom again and never did. ...
He named Max Gate after an ancient tollgate at the Fordington end of Dorchester. Even though the house was new, he wanted it old immediately. If he could have built a ruin, he would have done it and set us all up in it, as working models of servants from forgotten ages, bringing him his meals, winding his clocks, wind-ups ourselves, reminding him of some other figures moving through immemorial, crumbling landscapes.

It is January 1928, and Thomas Hardy, old now, is dying;  his literary executor Sydney Cockerell, his friend J.M. Barrie, his much younger second wife Florence, the family's servants, and their relatives and neighbors wait, and remember, and consider the responsibilities and opportunities that will come when that happens. This is all interspersed with things that happened long before, when Hardy lived at Max Gate with his first wife, Emma, and Florence came to work as his secretary.

Someone is knocking at the door. That they should bother to knock, it's the strangest thing of all that's about to happen, is it? That they -- whoever is there -- having run in blind terror, should pause and knock And now be waiting on the other side. Waiting for what?  Excuse me, ma'am, but I was wondering if you'll be coming to Mr. Hardy's room in the next short while since there seems to be a development that concerns you? Is that the message? And knocking a second time. Who could that person be, this monster of composure.  How wonderful too, she suddenly thinks, that the knocking on her door remains in place when everything else is shattered. The kindness of it gives her a sudden boost. The power of movement is returned to her. Could it be Barrie? Hello James. Ah, James. Is it over?  She walks to the door.

The story is divided almost exactly in half, at this moment, and we're tantalized, in detail or in passing, with things that really happened, or might have happened.

'Dr. Mann, though, is a curious fellow all told.'
'Like many of us, Sydney, as if Hardy had invented us.'
They walk on, the light growing stronger, the wind catching their trouser legs.
'I make a confession now, Sir James, that may surprise -- this is the place after all. I've not read any of the novels.'
'Hardy's? None?'
'Not one.'
Barrie is laughing softly. 'Not read a Hardy?'
'Never quite got around to it. The man himself seemed sufficient.'

In my recent spate of reading biographical fiction, this felt different, because I've not read a Hardy either {though I've been wanting to.} But the writing is very appealing, the people and the story are fascinating, and Max Gate has done its work of leading me to wonder how the real life compares to this one. Claire Tomalin has written a biography, so that's very promising, and I'm remembering now that there's another new novel that draws on one of the stories that Florence tells.  I'm looking forward to both!

Max Gate, by Damien Wilkins
Gallic Books, 2016
Source:  a preview from the publisher, via NetGalley
Noted under: Fiction, Thomas Hardy

I've had a problem with fictionalized biographies lately, but I would still pick this one up based on the cover alone!