...{the full title given above to distinguish this book from Miss Austen's unfinished  Love and Friendship, which is entirely different. :) }

If one is ill-advised enough to read Lady Susan -- as I did, many years ago -- one risks being taken in by libel, slander, argufication, despisefying, and false witness, all presented by a spinster authoress with pretensions toward being a great novelist. Thank goodness, Rufus Martin-Colonna de Cesari-Rocca, languishing in prison, has taken on the 'sacred obligation' of letting us know that 'Lady Susanna Grey Vernon was my aunt — and the kindest, most delightful woman anyone could know, a shining ornament to our Society and Nation,' challenging the 'insinuations and accusations' made against her, and sharing the true story 'concerning the Beautiful Lady Susan Vernon, Her Cunning Daughter, & the Strange Antagonism of the DeCourcy Family.'  {Not to be confused, btw, with the other DeCourcy family, although perhaps this is not a coincidence.}

Also, Mr. Martin-Colonna's publisher has made the dubious decision to include the original manuscript, most likely in a misguided attempt to attract readers to the horrid authoress' 'final so-called 'novels.'  Until he gives up in despair, halfway through, this appendix also include notes that address her 'habitual slanders and falsehoods.'

Note on Letter the Twelfth:  If more evidence of this account's falseness were needed — which I do not think it is — the actual difference between Reginald's and Lady Susan's ages was thirteen years, not 'twelve' as the anonymous Lady has it here. 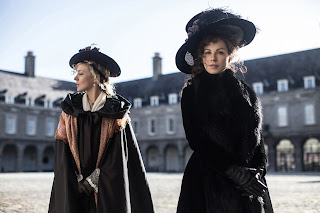 Delicious stuff. I haven't seen Mr. Stillman's film yet -- it opened here a few weeks ago, so I will! -- but I have a feeling the book and the movie will go well together, as they were undoubtedly meant to.

I have to admit that I did not enjoy the novel/novella. But that won't keep me from seeing the film and hoping they have taken some liberties with the story so as to make it more fun for me. :)

I must see the film, too. I'm planning a re-read of Mansfield Park over the summer. I ought to re-read Love and Friendship, too. Enjoyable posts!

I saw the film last weekend and really, really enjoyed it. Hope you're able to see it before too long!

I'm looking forward to seeing the film. Lady Susan was a favorite when I read it in 2011 during the Art of the Novella event!