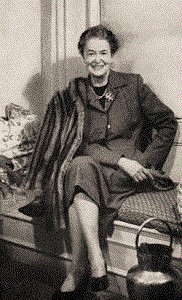 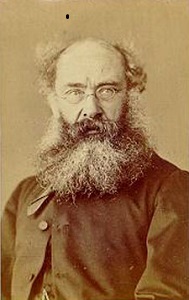 Mrs. Appleyard herself is at least half American. ... A good many of her ancestors came to this country in various small boats that tossed about the Atlantic before 1640, Her father, however, prudently waited and came on the Cunard. There are a good many nice people in this country whose ancestors missed the Mayflower. ...
And he remembered Trollope.
It was only a day or two before he died that he entertained Mrs. Appleyard with that story. He always treated her as if she were a delightful stranger whose acquaintance he was especially glad to cultivate. Really he had known her for fifty of his ninety years, yet he had never told her the story before. It was as if he had been saving it for her; producing it only now because he wanted her to have some last thing of his to keep and remember.
'What have you been reading lately?' he asked.
'Barchester Towers.'
'Trollope! My darling, I, moi qui vous parle, have seen that great man...'
There was an inn, it seemed, opposite the Markhams' house in Epping and the coaches changed horses there. On rainy days you pressed your nose against the glass and watched for the Epping coach. A long way off you heard the thunder of wheels and hooves. Then the horses steaming and smoking ad the hostlers shouting and the coachman stumping off stiff-legged in his caped greatcoat ...
One Friday his father said:  'Watch today and you may see Mr. Trollope, the writer, go by. He drives down into the next county every week for the hunting of the fox.' ...
For a moment it seemed to Mrs. Appleyard that she could hear the horn faintly blowing across green fields in the rain.
'I thought,' Mr. Markham said, 'that a writer would be a lean pale man with black whiskers, but when my father said, 'There he is. That's Trollope,' I saw a big burly red-faced man, like a great farmer.He filled more than half the dog-cart, big arms folded, face rosy under a hat with a wide brim, tall hat, of course, covert-cloth coat, bird's eye vogel stock -- Know what that is?'
'Blue necktie with white dots -- I've read Jorrocks*,' murmured Mrs. Appleyard.
'Right. Good girl.  Well brought up....'
'So I'd watch for him every week in the season coming down for the hunting of the fox. That great man. They'd come into our county sometimes. Our garden ran down to fields hedged in with dog roses and hawthorns. ... There was a mulberry tree at the end of the pleached walk -- they say Charles the First planted it. ... I used to stand under it and watch for the hunt, but it did not often come our way and I never saw him close until the meet at the Cat and Bells.
'I was sixteen and I had my first hunter and the new and shiniest top boots you ever saw and black velvet cap, stiffened, you know, in case you fell on your head...'
'My father took me up to Mr. Trollope and he nodded to me. My boots and my cap began to seem too new because everything he had on was so mellow with wind and rain and sun. It was like the difference between a piece of mahogany that's varnished and one's that's been rubbed with beeswax and turpentine for a hundred years.

With all our conversations lately about biographical fiction {'The author asserts that any resemblance between Mrs. Appleyard, members of her family, or other characters in this book, any real person or persons, including the Scandinavian, is purely coincidental, and she can't think how it happened.'}, this is a novel that we can only hope isn't really one. :)

'They started at the fox right away, and somehow I was in front at first, not too close to the hounds, but well up and my new horse...going sweetly. Then there was a fence. There was a gate in it and those with sense were going through it but that was too slow for me. ... There were dog roses feathering up over it with the red hips shining and the whole thing seemed to come up like a wave as I went over.'
He was silent a moment, and then said with a twinkle:  'And when we went over, my horse stopped and I ... went on.'
'Were you hurt?'
'No. I was thrown clear, but with my wind knocked out and, as I lay there, gasping like a salmon on a bank, over comes another rider and the horse skims me where I'm lying and I can feel his hoof touch my new cap. ... My horse was two fields away by that time -- never trust a chestnut horse or a red-headed woman -- and I stood there in my shining boots looking pretty dismally at my new cap, when Mr. Trollope jumped the hedge on his big bay and came down beside me, landing, heavy horse, heavy man, as lightly as a leaf falling.
'He bent his big rosy face over to see if I was all right, then sat back in the saddle.
'Why don't you put your head in your boots?' he called out, just lifted his reins a quarter of an inch, touched his spur to his horse's side was gently as a man would touch a baby's cheek ... and was off across the green field, going hell for leather. 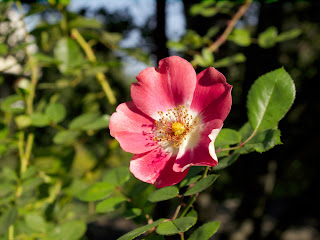 'He had a big hearty roaring voice. That was all he ever said to me. I've often laughed since to think how I must have looked in my new clothes with the mud on them and my horse gone and staring at the hoof mark on my new cap. The stiffening saved my brain, I suppose, what little there was of it.. Without it, I'd probably not have had the happiness of knowing your mother -- how beautiful she was -- or you, my darling, and the children, and your husband. He's a good American ... and I can't, after all these years in this great country, say more than that ...Only spring comes late here,' he said. 'There would be snowdrops in England now.' 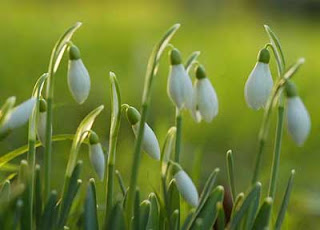 I resisted rushing off to buy Mrs. Appleyard, but I feel my resistance weakening....