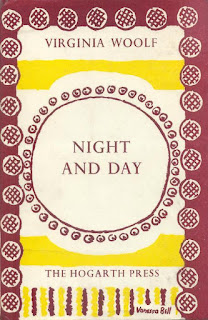 Night and Day was Virginia Woolf's second novel, published in 1919.  I've read that it's one of her most 'conventional' novels, that some of the characters were based on people that she knew {her sister Vanessa, her husband Leonard, her father, and Lytton Strachey, among others} and also that it was the last one in which she wrote about {or at least focused on} courtship and marriage.  Reading this book  was so different from reading To The Lighthouse or Mrs. Dalloway. As a late-bloomer in reading Virginia Woolf's fiction, reading those two books first has given me a certain idea of how she writes. and what you're facing when you open one of her books. But if I'd been given this book in a plain brown wrapper I'm not sure I would have guessed that it was hers.  I adored it, and at the same time found myself feeling very self-conscious of how fascinating, and odd, the difference felt.

It's definitely easier to give a summary. :)  This novel revolves around three women and two men in their 20s and 30s. living in London in the years just before World War I, and {this novel is definitely more plot-driven} the relationships that spring up, and shift, among them.  In the opening scene, Katharine Hilbery is helping her mother preside over a tea party {there are lots of them in this book), and meets Ralph  Denham, a solicitor's clerk who writes for a review edited by Katharine's father.  Katharine is beautiful, elegant, proper, a dutiful, loving daughter who is helping her scattered, romantic mother write a biography of her father, a famous poet; we learn a little later that she studies mathematics at night and dreams about becoming an astronomer.  {Katharine's passion for these studies didn't really come through ... it felt more like something she thought about being passionate about, if that makes sense ...  and I'm not quite sure whether that's in keeping with the limits placed on women at the time, or a limitation of a young novelist.} Ralph is spiky, opinionated, critical, dissatisfied with his dull job and weighed down by his responsibilities as the oldest son in a large family.

A day or so later, we meet the next two.  Mary Datchet is a little older, a vicar's daughter who lives in a flat in London, and works (with great commitment, but without pay) as the secretary to an association promoting women's suffrage. She lends her flat, a little grudgingly, to friends who want to hold gatherings,  and one night it's to hear William Rodney read a paper he's written on metaphors in Elizabethan poetry.  William is odd and socially inept, but he represents a way forward for Katharine, and they're soon properly and suitably engaged. But Ralph becomes obsessed with Katharine, and Mary falls in love with Ralph, and Katharine, not sure about Ralph but knowing that she is not in love with William, decides to foster his growing attraction to her young, much more malleable cousin Cassandra.

All of this is told with lightness and often snarky humor,  at tea parties and family dinners and committee meetings at the suffrage association and anxious visits from interfering aunts and walks in London and excursions to historical sites. At the same time, Katharine, William, Rodney and Mary {a little less, but still} are wonderfully self-absorbed, endlessly studying their own emotions and reactions and making soulful decisions about what they will renounce and how they will move forward. There's also a lot of gorgeous colors and images, something else that ties this book a little more to those other two very different novels.

As I was reading, I found myself thinking that Night and Day felt a little like Jane Austen, if she were writing a hundred years later, although V.W. didn't feel the need to give the 'marriage plot' its usual ending.  I loved Mr. and Mrs. Hilbery, Katharine's parents; Mr. Hilbery, especially, seemed very Mr. Bennet-like, until he lapses into anger and convention as Katharine's engagement to William unravels.  I was remembering the scene where Mr. Bennet responds to Elizabeth's rejection of Mr. Collins, but it's Mrs. Hilbery who takes that part here. :)

Steps approached her unheard. It is true that they were steps that lingered, divagated, and mounted with the deliberation natural to one past sixty whose warms, moreover, are full of leaves and blossoms, but the came on steadily, and soon a tap of laurel boughs against the door arrested Katharine's pencil as it touched the page. ... At first she attached no meaning to the moving mass of green which seemed to enter the room independently of any human agency, Then she recognized parts of her mother's face and person behind the yellow flowers and soft velvet of the palm-buds.
'From Shakespeare's tomb!' exclaimed Mrs. Hilbery, dropping the entire mass upon the floor, with a gesture that seemed to indicate an act of dedication. Then she flung her arms wide and embraced her daughter.
'Thank God, Katharine!' she exclaimed. 'Thank God!' she repeated.
'You've come back?' said Katharine, very vaguely, standing up to receive the embrace.
Although she recognized her mother's presence, she was very far from taking part in the scene, and yet felt it to be amazingly appropriate that he mother should be there, thanking God for unknown blessings, and strewing the floor with flowers and leaves from Shakespeare's tomb.
'Nothing else matters in the world!' Mrs. Hilbery continued. 'Names aren't everything. It's what we feel that's everything. I didn't want silly, kind, interfering letters. I didn't want your father to tell me. I knew it from the first. I prayed that it might be so.;
'You knew it?' Katharine repeated her mother's words softly and vaguely, looking past her. 'How did you know it?' She began, like a child, to finger a tassel hanging from her mother's cloak.
'The first evening you told me, Katharine. Oh, and thousands of ties -- dinner-parties -- talking about books -- the way he came into the room -- your voice when you spoke of him.'
Katharine seemed to consider each of these proofs separately. Then she said gravely:
'I'm not going to marry William. And then there's Cassandra --'
'Yes, there's Cassandra,' said Mrs. Hilbery. 'I own I was a little grudging at first, but, after all, she plays the piano so beautifully...'

{Mrs. H. has gone off on a spontaneous visit to Stratford-upon-Avon, until Mr. H. writes urging her to come home. Fun, of course, to be reading this on the 400th anniversary. :}

I'm leaning a little now toward it being better to have read this after the two more Virginia Woolfish novels. It might have been a good thing to see firsthand how she developed and changed, almost suddenly, as a writer, but it's not so bad to see that in hindsight.  And this is such a readable, entertaining, not-intimidating, wonderfully enjoyable book, even on its own.

I read Night and Day for 'beginnings and endings,' section two of Ali's #woolfalong, where we read either an early novel or a late one.  Shorter fiction is next, for May and June.  I also listened to part of this book, with {perfect!} narration by Juliet Stevenson, something I think I'll do over and over again. )

So glad you enjoyed this so much. I loved it too. I agree with your point about it feeling so different to her other books and yes had I been given it in a brown paper wrapper I wouldn't have guessed it was by VW either.

I'm another late-comer to Virginia Woolf and this book sounds wonderful! Perfect for a read/listen combination. To the Lighthouse was going to be my next VW novel, buy now I'm not so sure...

I've only read Mrs. Dalloway and A Room of One's Own -- I've been afraid to tackle Woolf because stream-of-consciousness is really not my thing. However, this one sounds right up my alley, I'll add it to my list. Great review!