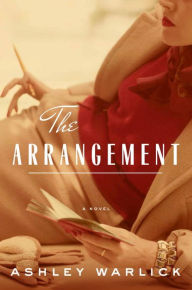 If she understood art, if she could write, if she was beautiful and smart and a tangle of other things, still taking shape, what she was truly good at was this. She ate slowly, she sat back from her plate, she allowed her pleasure to show on her face. And she was willing always, to try the next thing.

Either coincidentally, or through some kind of library-reserve karma, I've found myself reading two new novels that are based on real lives. But as someone who loves and reads biographies the way I do, I can see why I'd be drawn to them...especially when they're on based on people I'm especially interested in.  Even then, these fictional lives don't always work for me {not this time, very much, or this time, in a horribly wonderful way), but I like the two that I've been reading now, back to back, much more. :)

Set in the 1930s, The Arrangement is based on the lives and loves of the wonderful writer Mary Frances Kennedy (M.F.K.) Fisher, her husband Al Fisher, their friend Dillwyn Parish {known as Tim}, and his wife, an aspiring Hollywood starlet named Gigi.  After spending several years in Dijon, where she has been awakened to food, Al and Mary Frances are living in Los Angeles, where Al is teaching and trying (unsuccessfully) to write, and Mary Frances is writing the essays that she will turn into her first book. She loves Al, but Tim is sexy and supportive, encouraging her to write.  Their love affair becomes more complicated when Gigi leave Tim for another man, and Tim agrees to travel to Delaware to organize their divorce. To protect Gigi's reputation and her contract with the movie studio, Tim asks Al and Mary Frances to move into his house with her, keeping the four of them in an awkward, painful menage.  Months later, Tim creates another arrangement:  he invites Mary Frances, with her good French, to accompany him and his mother on a tour of Europe, ending at Le Paquis, a small stone house that Tim and his sister have bought near Vevey, overlooking Lac Leman.  As Al begins to fall apart, because he can't write, Tim suggests that he come to live with them in Switzerland, but this is an arrangement that can't hold.

She had slipped this life for another, where time and event and memory all blended together into some other kind of sense altogether, traveling from one fantasy to the next. Sometimes words were the conduit, and sometimes food was the conduit -- cooking, eating, talking about food -- but always at the other end was this imaginary life, and she realized suddenly how much time she spent there. How much time she spent there alone.

A love story that's a little sad, lightened in places by Mary Frances' visits with her Mr. Bennet-ish father and the rest of her family, in California and later in Paris. To really enjoy it I think you might almost have to be drawn to knowing that these are real people {not fictional ones}. With that in mind, the writing is gorgeous in places, very rhythmic and descriptive, and so appealing, especially (for me) when the setting moves from California to Paris and then to the part of Switzerland that I know a little.The author, Ashley Warlick, says in her afterword that she was inspired by reading a 'luminous' biography of M.F.K. Fisher.  I have that book, by Joan Reardon, on my shelves, unread, and the novel, which I did really enjoy, has only made me long to know more about her, and read more by her.

And now I'm back in Berlin, with George Eliot and her young German publishers, a more rollicking story, enjoyable in a different way.

Many years ago I read some nonfiction by M.F.K. Fisher with lots of tidbits about her life. I think I would like this novel, she was a fascinating and talented lady.

Fictionalized biographies have become more appealing in recent years, and I love the sound of The Arrangement! Have you read The Master by Colm Toibin?