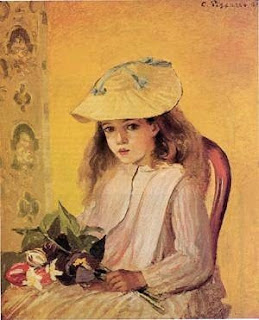 For me, there are two things, both a little shameful, about reading Henry James:  I always feel a little virtuous, or like I'm doing all of my homework, and I always, always enjoy the book more than I expect to. {The only exceptions, so far, seems to be his ghost stories.} That being said, I haven't actually read very many of his novels, or it's been a long time since I have. So I was thrilled when a group of us -- JoAnn, Frances and Darlene -- decided to read What Maisie Knew together.  {Thank you, friends, for reading it with me, and since I'm pretty sure this was your idea, thank you, JoAnn, especially :) }  I finished reading it about a week ago, and to be honest, I've been procrastinating about writing about it because I didn't know where to start. Maybe with adjectives?  Horrifying, fascinating, melodramatic, uncomfortable, sweet in spots, heavy going in others, filled with lines and images that I wanted to remember.

Underneath everything else, the plot is fairly simple: when Beale and Ida Farange go through a scandalous, nasty divorce {'after being perfectly insignificant together, they would be decidedly striking apart'}, the judge rules that six-year-old Maisie should spend six  months with her father and six months with her mother.  Her connection to her parents is made clear right from the beginning {'They had wanted her not for any good they could do her, but for the harm they could, with her unconscious aid, do each other.'} and only the starting point, as Maisie acquires, first, two governesses {'Parents had come to seem vague, but governesses were evidently to be trusted.'}  and then two step-parents {'Her researches has hitherto indicated that to incur a second parent of the same sex you had usually to lose the first.'}. Then there's more to it, something that closes this horrible circle, but that would be telling. :)

Henry's experiment in writing Maisie seems to have been to tell the story from the little girl's perspective, showing us 'what Maisie knew' at different places as she is passed back and forth among this widening circle of adults. They literally form her whole world, especially since they are all people, even the kindly Sir Claude, who speak freely, if not always honestly, about the others in front of her {'[Miss Overmore] was in a false position and so freely and loudly called attention to it that it seemed to become almost a source of glory'}.

I think he was {surprisingly? where could this have come from?} able to show us how Maisie moves back and forth between a childish or innocent understanding of motives and actions, to her {very little-girl-like} pretending...

She had never, she thought, been so addressed as a young lady, not even by Sir Claude the day, so long ago, that she had found him with Mrs. Beale. It struck her as the way that at balls, by delightful partners, young ladies must be spoken to in the intervals of dances, and she tried to think of something that would meet it at the same high point. But this effort flurried her, and all she could produce was:  'At first, you know, I thought you were Lord Eric.'
The Captain looked vague. 'Lord Eric?'
'And then Sir Claude thought you were the Count.'
At this he laughed out:  'Why he's only five foot high and as red as a lobster!' Maisie laughed, with a certain elegance, in return -- the young lady at the ball certainly would -- and was on the point, as conscientiously, of pursuing the subject with an agreeable question.  But before she could speak her companion challenged her. 'Who in the world's Lord Eric?'
'Don't you know him?' She judged the young lady would say that with light surprise.

{It's scenes like this -- because I should note that Maisie, walking in the park with her stepfather, has just seen her mother with a man they do not know, and is sent off to talk with him while Ida and Sir Claude confront each other -- that lighten the story. This, and a wonderful cat-fight between pretty, young Miss Overmore and censorious, antiquated Mrs. Wix :)}  Then, he brings her to  a slow understanding of how she can best manage these grasping figures {'she had learned, on the other hand, soon to recognize now, at last, sometimes, patient little silences and intelligent little looks could be rewarded by delightful little glimpses'}.

All in all, a book as Darlene has noted, will be hard to forget.

Please read Frances' thoughts here and Darlene's thoughts here; JoAnn will be sharing hers soon. What should we read next?

(The painting is Portrait of Jeanne, by Camille Pisarro, found here.}

Ah, the scene with the Captain is so good. I was greatly tempted to write about it.

And Tom is right, the scene with the Captain is excellent especially when we see Maisie challenged in what she has grown to think she knows about her mother. All these tenuous realities...

Really enjoyed reading this with all of you!