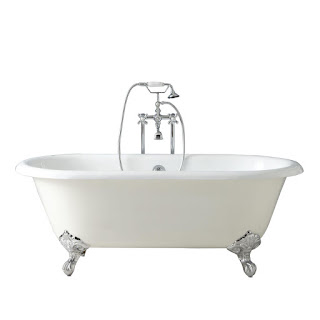 Julia, by marriage Mrs. Packett, by courtesy Mrs. Macdermot, lay in her bath singing the Marseillaise. Her fine, robust contralto, however, was less resonant than usual; for on this particular summer morning  the bathroom, in addition to the ordinary fittings, contained a lacquer coffee table, seven hatboxes, half a dinner service, a small grandfather clock, all Julia's clothes, a single-bed mattress, thirty-five novelettes, three suitcases, and a copy of a Landseer stag, The customary echo was therefore lacking; and if the ceiling now and then trembled, it was not because of Julia's song, but because the men from the Bayswater Hire Furniture Company had not yet finished removing the hired furniture.

If you were a person who loves old movies (of the Cary Grant/Katherine Hepburn/Greer Garson/Myrna Loy sort}, and who was in the mood for something light and sparkling, and who couldn't wait for Margery Sharp Day, after being introduced to her last year by our friend Jane — in other words, if you were me — an opening paragraph like this one might make you a little giddy with thinking you had found the book you were most hoping for. And even though the opening scene does set the stage for The Nutmeg Tree, this delightful novel (first published in 1937) offers so much more.

There's a plot (though it's not what drives the book):  after a brief entanglement with young Lieutenant Packett before he heads back to World War I, Julia finds herself pregnant, is surprised when Packett insists on marrying her, and is taken in by her kindly, respectable and understanding in-laws when her husband dies two months later at Ypres. But even then, Julia knows herself; she is grateful to the Packetts, but she's bored and lonely; 'it must be admitted that to have held out as she did, under such conditions for a year and seven months was extremely creditable; and no less so because at the end of that time she gave up the struggle and went thoroughly back to the bad.'  (The 'bad' being eking out a living as a chorus girl, or by having little flings, and eventually by moving in with Mr. Macdermot.)  When we meet her in the bath, she is trying to avoid her creditors and come up with enough money to travel to France;  her daughter Susan, who she has not seen in sixteen years, wants to get married, against her grandmother's wishes, and has written to Julia to ask for her help.

As I noticed before {when I read Lise Lillywhite — still my favorite — and The Flowering Thorn}, I think Margery Sharp has such a gift for drawing characters, and this is what draws me in.  Julia is an aging girl-about-town who wants to pretend to be a lady for her daughter's sake. When she meets the unsuitable young man, she's dismayed to discover that he's all too much like her, and not a good match for her lovely but priggish daughter. Julia's antics are delightful, but she's also wonderfully true to herself,

A number of us read different books for this celebration, but there seems to be a common thread that we're hoping to find, and read, more of them. It's Margery Sharp's birthday today, but we've gotten the presents. {Thank you, Jane, very, very much, for inviting us to the party and introducing us to this writer.}

{Julia Misbehaves, a movie of the sort I like best, was made from this book in 1948.  I first saw it a few years ago, before I knew about Margery Sharp, and I think I'll watch it again tomorrow, just for fun. But Frances is absolutely right; the book can't help but be better.} 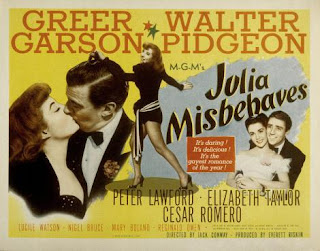 I think this is my favorite of her books, but I'm intrigued to hear that Lise Lillywhite is yours - I bought a copy of that recently, and I may move it up the reading stack.

I watched part of the film, because I love Greer Garson and some of the supporting actresses, but I can only take Walter Pigeon in small doses :)

PS, I'd love to have that bathtub!

I thought that this would be your sort of book, and I am so pleased that it was. After seeing so much enthusiasm for Julia today and yesterday I've finally invested in a copy of my own. Library books are all very well, but sometimes you need a book to hand ready for its moment.

I'll have to mark my calendar early if this event happens next year! Thought I would start with The Nutmeg Tree, but since Lise Lillywhite is your favorite, I'll consider that one, too.

I'm pushing to finish City on Fire and begin What Maisie Knew next week :)

I'm glad you enjoyed this one too. Julia is a wonderful character, isn't she? I'll definitely be reading more of Margery Sharp's work, but her books all sound so intriguing I'm not sure which one I want to read next! I'll have to see if I can find a copy of Lise Lillywhite, as it's your favourite. :)