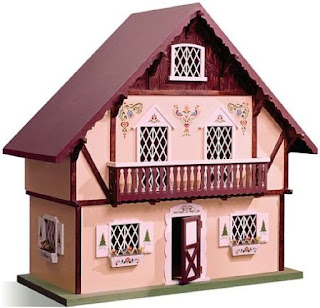 After reading another of Henry James' ghost stories, I'm now reminded that our Henry can be very funny, and that he can set you to bookmarking one delightful, or brilliant, turn of phrase after another, but on the other hand I/m not sure ghost stories were in his element. Everything I would think you'd want to put in {suspense, suspending your disbelief, scariness} seems to be left out {apparently, I noticed this five R.I.P.s ago :)} and it's as though you could take the ghostly element out of the story and not miss it.

But this one, at least, was a lot more fun to read!  The story is set in Switzerland, at an inn in the mountains...

The weather certainly would have made up for the company; but it wasn't subjected to this tax, for we had by a happy chance the fleur des pois [the 'flower of the peas,' or the pick of the bunch]:  Lord and Lady Mellifont, Clare Vawdrey, the greatest (in the opinion of many) of our literary glories, and Blanche Adney (in the opinion of all) of our theatrical, I mention these first because they were just the people whom in London, at that time, people tried to 'get.' People endeavored to 'book' them six weeks ahead, yet on this occasion, we had come in for them, we had all come in for each other, without the least wire-pulling. A turn of the game had pitched us together the last of August, and we recognized our luck by remaining so, under protection of the barometer. When the golden days were over — that would come soon enough — we should wind down opposite sides of the pass  and disappear over the crest of surrounding heights.

During the long short story, we learn that each of these people have a social role and expected behaviors:  Lord Mellifont is patrician, elegant, respected, tactful; Lady Mellifont is nervous; Clare Vawdrey is a witty conversationalist, always talking; and Blanche Adney, is as her friends know, desperate for the part 'for which she had immemorially longed.'  We don't learn as much about the narrator, except that he's a man who travels in the same social circles, and he's a bit of a troublemaker, the one who tries to ferret out what is happening, ghost-wise.

For me, this was the most amazing thing in the story:


... I told her she should be obeyed in a moment, but I wanted her first to satisfy my just curiosity. What had happened before dinner, while she was on the hills with Lord Mellifont?
'How do you know anything happened?'
'I saw it in your face when you came back.'
'And they call me an actress!' my friend cried.
'What do they call me?' I asked.
'You're a searcher of hearts -- that frivolous thing, an observer.
'I wish you'd let an observer write you a play!' I broke out.
'People don't care for what you write; you'd break my run of luck.'

Amazing because this story was written and published in the early 1890s, the time when (I was recently reminded) Henry was trying desperately, and failing, to reinvent himself as a playwright ... amazing that a later writer would send  him to drown himself in the Seine and Henry himself would write this.

The plot hinges on the characters of Lord Mellifont and Clare Vawdrey. Vawdrey claims to be writing a play for Blanche, but when the group gathers after a dinner of 'the inevitable veal' to hear the first act, he can't or won't read it to them, sending our narrator in search of the script and the reason for the writer's unusual reticence, only to find that Vawdrey seems to be in two places at the same moment. At the same time, he also insists that Blanche tell him more about an odd thing that happened earlier. She had gone off with Lord Mellifont for some private flower-picking in the mountains; we learn later that he tactfully allowed her to return to the inn without him, but she turned back to the spot where she had left him.


'...You can't understand what happened then without having the scene before you.'
'You must take me there,' I said.
'We may see the wonder here. The place was simply one that offered no chance for concealment -- a great gradual hillside with obstructions or cavities or bushes or trees. ... He was too absent, too utterly gone as a candle blown out for some reason best known to himself. ...'

There's a very Henry-esque insight that explains what is happening  —  the narrator realizes that Vawdrey is really a very private man who assumes a different face in public, and that Lord M., in contrast, is a public figure who has never needed or wanted a private life.

On the other hand, the story definitely feels more like a drawing-room comedy. It was written about 40 years too soon, but while I was reading it reminded me of a 1930s movie, where everyone stands around looking elegant and saying witty things.  Like this one...

which I just recorded, coincidentally; I guess I like my ghosts best when they're wearing evening clothes.  :)

Have you read What Maisie Knew? It's one of those titles that catches my eye all time but I haven't picked it up yet. I really enjoyed The Turn of the Screw!
Mr Gissing has been trying my patience with The Whirlpool but I'm hanging in there...