'The Wheel of Time' 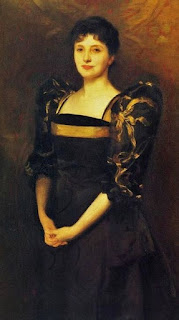 Upstairs, in a high, quiet, old-fashioned drawing-room, she was before him. What he saw was a tall woman in black, in her bonnet, with a white face, smiling intensely – smiling and smiling before she spoke. He quickly perceived that she was agitated and was making an heroic effort, which would presently be successful, not to show it. But it was above all clear to him that she wasn’t Fanny Knocker – was simply another person altogether. ... That rascal of a Crisford had done her such perfect justice that he felt as if he had before him the portrait of which the image in the studio had been the original. There were nevertheless things to be said, and they said them on either side, sinking together, with friendly exclamations and exaggerated laughs, on the sofa, where her nearness seemed the span of all the distance that separated her from the past. The phrase that hummed through everything, to his sense, was his own inarticulate ‘How could I have known? how could I have known?’ How could he have foreseen that time and life and happiness (it was probably more than anything happiness), would transpose her into such a different key? Her whole personality revealed itself from moment to moment as something so agreeable that even after all these years he felt himself blushing for the crass stupidity of his mistake. Yes, he was turning red, and she could see it and would know why: a perception that could only constitute for her a magnificent triumph, a revenge. All his natural and acquired coolness, his experience of life, his habit of society, everything that contributed to make him a man of the world, were of no avail to cover his confusion. He took refuge from it almost angrily in trying to prove to himself that she had on a second look a likeness to the ugly girl he had not thought good enough – in trying to trace Fanny Knocker in her fair, ripe bloom, the fine irregularity of her features. To put his finger on the identity would make him feel better. Some of the facts of the girl’s crooked face were still there – conventional beauty was absent; but the proportions and relations had changed, and the expression and the spirit: she had accepted herself or ceased to care – had found oblivion and activity and appreciation. What Maurice mainly discovered however in this intenser observation was an attitude of hospitality toward himself which immediately effaced the presumption of ‘triumph’. Vulgar vanity was far from her, and the grossness of watching her effect upon him: she was watching only the lost vision that had come back, the joy that, if for a single hour, she had found again.


As much as I thought it was such a lost opportunity, many of the references in The Fifth Heart did have me making notes of things I wanted to read or read about.  One was a passing mention of Henry James's oblivious friendship with Constance Fenimore Woolson, an American writer who committed suicide by throwing herself into a canal in Venice {from loneliness, or even rejection?}, and of this short story, which Henry was writing during one of his last visits with her. I've always found her fascinating, and I borrowed a volume of his stories from the library just so I could read this one.

It's beautifully constructed.  As it opens, Mrs. Knocker and Lady Grenville meet again, after many years, by chance, in Paris. Jane Knocker, who had been 'the less attractive of the two girls,' has 'become grand' in looks and in wealth, but is worried about the marriage prospects of her very plain daughter. Lady Grenville, 'that intimate friend of her youth, beautiful, lovable, and about to be united to a nobleman of ancient name,' has become 'a wasted and faded dowager, exquisite still, but unexpectedly appealing, who made no secret ... of what she had had, in vulgar parlance, to put up with.'  She is a widow, left badly off, with six children, including Maurice, her very handsome but unemployable son who must, Trollope-esquely, marry money. The mothers plot to bring them together, but although Mrs. Knocker believes that Fanny has fallen in love, Maurice can't bring himself to go through with an engagement.

Then, it is instantly twenty years later, and Maurice, whose very short marriage to a beautiful French woman has given him, unbelievably, an 'insurmountably plain' daughter of his own, is watching over her at a bohemian lunch party, when the host, a painter, unveils a new portrait of a beautiful woman, and Maurice is shocked when he recognizes her. Fanny is now a wealthy widow, with a handsome son, and during the long afternoons that they begin to spend together, she reveals the feelings that she had for him. She gently tells him that it is impossible for them to marry, but she has already told his daughter that 'you must be our compensation.'  When you have moved into the story, and out again, you can see what will happen next, even if it is not what you expect.

I'm not especially drawn to reading short stories — are you? — but whenever I do I'm sure that I've been missing something.  I was also pleasantly surprised by how readable, without the usual wordy convolutions, and how sweetly funny, at times, our Henry can be.  Reading this story was a lovely interlude between books, and I'm hoping to dip into the collection once or twice more before it goes back. {If you'd like to read it, the story is available online.}

I'm not especially drawn to short stories, but do make an effort to read them from time to time. I even used to be a regular Short Story Monday participant but, unfortunately, am out of the habit now. Not sure I've read any of Henry's stories. I'm already planning his next novel though... have you read What Maise Knew?

I haven't - let's read it together!

Before or after Trollope's Palliser novels? ;-)