The Fortnight in September 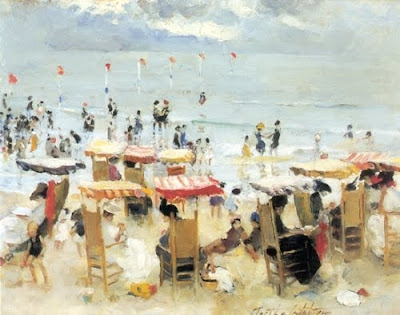 This was a lovely way to spend a fortnight (or most of one) in September. {I planned this, and for once I stuck to that.}  I've learned from Persephone Books that R.C. Sherriff  (1896-1975) worked in an insurance office, was severely wounded at Ypres in World War I, and wrote a highly successful play called Journey's End, before writing this one in 1931 and working in Hollywood as a screenwriter {and he wrote or at least worked on Mrs. Miniver, which I just recorded on my DVR, it being one of my favorite movies}. I love coincidences like this. :)

Perfect because it was so calm, and done in miniature, and about nothing in particular.  It's about the Stevens family and their annual holiday at the seaside.  The family has been taking this same holiday since their children were small:  the same train journey, for the same two weeks, to the same seaside town, to the same genteelly shabby rooming house.  For all of the them, it is an escape from their everyday lives, but then every moment of the holiday will be as it has been before; Mr. Stevens will pull out the Marching Orders he has written and refined for Going Away Eve, the trunk is backed and unpacked the same way, dinner will be boiled beef because it makes such nice sandwiches, and the chance to spend an extra day at the seaside is weighed against the usual pleasure of mowing the lawn on the Sunday before Mr. Stevens must return to work.  Mrs. Stevens will fret about the train connections, and they look forward to the same pleasures, knowing by now that there will be a family game of cricket and buns before lunch, that if no one is greedy two stone jars of ginger beer will last them right to the end, and that Mr. Stevens' legs will ache after his first day wearing canvas shoes.

The charm of the book is in this sameness, and in the characters' wonderful ordinariness. ... ordinariness, but not insignificance.  The holiday is anticipated, and every moment is expected, and checked against what it has always been like. {There's a wonderful scene when the family is out for one of their first strolls along the promenade. They've all been a little unkind to timid Mrs. Stevens, and when they turn to look for her, she is gone,and there are wild imaginings and urgent promises,}  The moments when things might be different — when Mary finds wild joy in making a friend, or when Dick wanders off because he has planned to spend part of the fortnight working out why he is so secretly unhappy in his first job, or the very poignant moment when the Stevenses find out that their perfect holiday isn't quite good enough for other people — emerge and then settle down again, in the family's close bonds with each other. This is a book where the major plot point  — and the source of some serious suspense — is an invitation to tea, because it is Something That Does Not Usually Happen.

I found this book {not the Persephone edition} in the college library and am very happy about that. And though I really can't pretend that I've been keeping up with Reading England 2015, I did just spend a fortnight in another county... 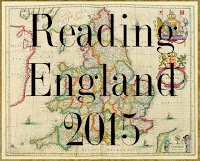 I loved this book, and I'm so pleased that the library found you a copy to read at just the right time.

A week of coincidences. This book has never popped up on my radar before and then Thomas of Hogglestock tweeted out a photo of two old editions he discovered in a used book store and now you have posted this lovely review. Maybe I should take this as a sign? It sounds like perfect fall reading.

Hmm... I saw Thomas' s post, too, and now this. Time to start hunting for a copy. And I'd just like to jump right into that picture!

And I have the Persephone edition at home so I didn't buy either of the two old copies I found in the book store. I did buy what appears to be a novelization of Journey's End. I loved, loved, loved Fortnight in September and also loved, but for different reasons The Hopkin's Manuscript.