..and then his thoughts went back to Thora Kilmartin's letter. Not so much to the letter as to his abstracting it without a word to Burden or to any police officer, abstracting it moreover from a crime scene. Guilt wasn't a feeling with which he was very familiar, but he recognized it when he had it. It wasn't just the guilt that troubled him but the necessity of confessing his offence to Burden, It was necessary, he had to do it, but he could hardly think of anything he wanted to do less. In the past, Burden had confessed his mistakes and lapses to him, he was the appropriate person, the superior officer. Now their roles were reversed or almost. There was no way out. To ignore it, to forget the letter, was unthinkable. Not only should Burden and his team meet Thora Kilmartin and talk to her, want to meet her and talk to her, but to withhold that letter and pretend it didn't exist was the kind of act that made him feel -- in a phrase he had always despised, when others used it -- unable to live with himself
Dora and Sylvia came downstairs, announced that tea would soon be coming, and looked at him as if they had expected him to be asleep. 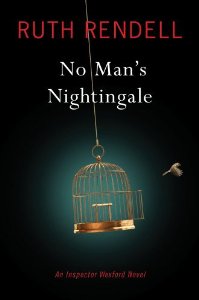 My PBS station is running endless pledge promotions for Downton Abbey, and in one of them, they say something like 'We're sure you'll want to tune in to see how your favorite characters are doing,' It's hokey, but it's also true, isn't it? As mysteries go, this is a very wistful, almost sweet book, as Wexford thinks about how his life has changed and works to adjust to it.

It's been two years since The Vault {which I especially liked, because of its connection to another book}. As we found out then, Wexford is retired, and has forced himself to finally read all six volumes of The Decline and Fall of the Roman Empire, only to find that he's enjoying it.  Burden still consults with him on cases and brings him to crime scenes, with Wexford hanging back and trying to persuade a young DC to call him by his first name.

Maxine, the Wexford's overly talkative and word-mangling cleaner, has found the new vicar, Sarah Hussain, strangled to death. {As Dora tells him, 'Before you retired you used to have to question possible witnesses, but now people like Maxine come to you. You don't have to ask.'}

'You needn't look like that. People who leave letters lying about are just asking you to read them, is what I say. I can see you want to know what was in them. Well, it was mostly bad language, the F-word and the S-word and even the W-word, though that was a funny one to send to her. 'Call yourself a woman of God?' was in a lot of them, and 'Go back to India.' One day she asked me if I'd ever been married. I thought that was a bit of cheek, considering she knew I'd got four kids. I said no, I hadn't, and had she?  I could tell she didn't like it a bit but if she could ask me, why shouldn't I ask her? 'Yes, I was,' she says. 'He died.' ... And I don't know how to put it, but there was like agony in her face. Well, she went up to the study to write her sermon. And the opportunism like never arose again.'

Wexford, knowing he must tread carefully, finds himself disagreeing with Burden about suspects, and motives, and how the investigation should be handled.

When I looked at the book's front matter I saw that this is the 24th book in the Inspector Wexford series.  It seems to me that that's what's unique about this genre. When a mystery writer is so good at character development, and brings so many complex elements into her books, maybe even more so in the most well-written standalone novels, you realize that you have spent years getting to know the people she writes about, and in a way the things they go through seem very understandable, and realistic, and real. I think that's where the Downton Abbey effect comes from.

Now it seemed to him as if he was to be rewarded. A BMW, not the Jaguar that had brought Mrs. Steyner and her son to Sarah Hussain's memorial service and was driven by Timon Arkwright, had been parked outside Carroll House. Its driver, a small, thin man, could just be seen sitting in the driver's seat eating a large sandwich. Wexford had read somewhere that women over fifty pass unnoticed in the street. Could that also be true of men over sixty-five? If the women hated being thus ignored, he would welcome it. Of course it is generally true that police detectives don't want to be seen. He wished he had some reason to go into one of the houses opposite, where he could watch out of a front window, but he had none. Not for the first time but perhaps more positively and tellingly than before, he was realizing how insignificant he had become in the great scheme of law and order, of law-making and law-implementing, of having nothing to do in a society where doing things was all-important.
But still he waited, standing this time a little down the street outside a huge house, which, from the series of bells by the main entrance, seemed to be divided into flats. In case anyone was watching him -- in the unlikely event -- he put on a small show of impatience, looking at his watch several times and then, as if unable to wait any longer, he took out his mobile phone and made a call.
Dora spoke rather irritably when he told her what he was doing. 'For heaven's sake, Reg, give it a rest. You're retired.  You don't have to do it anymore' Inspiration came to her aid. 'Gibbon misses you.'
That made him laugh. 'Tell him I'll soon be back."

I enjoyed this one too although I did wonder how realistic it was that Mike would let Reg tag along on interviews etc. Still, I was able to suspend my disbelief! I somehow missed The vault but have it on my Kindle to read one day soon.

PS. 41 days 12 hours 45 minutes until Downton season 4! Have you seen the countdown on PBS's website ?

I just began reading this series a few months ago and I plan to continue. This is a wonderful review, and I do love getting to know the people in a series over the years, and through their 'adventures.' The best writers keep the characters alive and interesting. And she is definitely one of the best writers, I feel. Thanks so much for this.