When one book leads to another ...


Impulses about what to read next {or what to read someday} come from so many different places, don't they?  Browsing in bookstores...reading the Sunday book reviews ... reading your blogs ... haunting the new fiction/new-non-fiction/new audiobook shelves at the library ... I'm sure we all have our favorite sources {and I would love to hear about yours}, but one of my favorite things is to read about a book I  haven't read in a book that I'm reading now.  {I believe I have already shared my secret love of bibliographies ... } 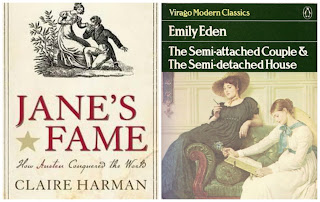 1. I read and enjoyed Claire Harman's book Jane's Fame:  How Jane Austen Conquered the World a few years ago, and over the summer I've been listening once in a while to the audiobook version.  {I hope this isn't disrespectful to the book or its author -- I don't mean anything negative when I say this -- but  with the desultory way I listen lately this is another perfect audiobook for me.  A book I've already read, that can be enjoyed (and made sense of) in short bursts instead of long, sustained periods of listening and paying attention. But I digress.} When I was last listening to it, there was a discussion of how quickly Jane Austen disappeared from view in the decades right after her death ... so much so that a circle of writers in the 1820s and 1830s felt free to write 'utterly forgettable novels' that were suspiciously Austenlike.  She mentions one, Thomas Lister, who married another writer's niece,

... one of whose friends, Emily Eden, was a would-be novelist engaged in writing a story suspiciously close in plot, setting and tone to one of Austen's:  'Mrs. Douglas had been an heiress which perhaps accounts for Mr. Douglas having married her ... He let her have a reasonable share of her own way ... but kept his own opinion.' The Semi-Attached Couple was not published until the 1850s but had been written in the 1830s, when Austen still seemed like a fairly untraceable source.


Kind of irresistible, no?  Especially when a Virago edition of  The Semi-Attached Couple & The Semi-Detached House has been sitting on my shelves, unread, for about as long as any other book has.  I think I bought it because it was a Virago and because the title is kind of wonderful. 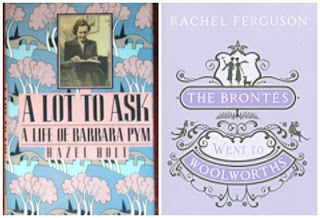 2.  In May, just before Barbara Pym Reading Week, I read A Lot to Ask, Hazel Holt's biography of Miss Pym {another book that had been left unread for a very long time}.  Holt described Barbara's enjoyment of inventing what she {Barbara} called 'sagas':

To those who have never invented and maintained a 'saga' the whole thing must seem very strange indeed. The subject can be anyone at all -- a famous person you don't actually now, a fictitious character, or even an animal -- but it is most rewarding to weave a saga around someone you can actually observe. The great chronicler of the saga was one of Barbara's favorite authors, the late Rachel Ferguson, whose novel The Brontes Went to Woolworths. describes, stage by stage, the way a saga, built up around a remote person (in this case a high court judge seen from afar, can develop, with a little luck and perseverance, into a real-life friendship. ... She (and her mother and sister) looked him  up in Who's Who (the first obvious move), collected photographs, walked past his house (to note when the window boxes were changed), hunted for someone who knew him, and then gave invented characteristics to the people around him (his wife, his clerk in chambers), and conducted imaginary conversations between them.


Somehow, when it's Barbara Pym and one of her favorite novelists, it's not really stalking. :) The Brontes Went to Woolworths is one of those intriguing 'rediscovered' Bloomsbury Group novels (with the very pretty covers) that came out a few years ago.  I haven't read any of them yet {have you?}, but now that I know this author was one of Barbara Pym's favorites, how can I not? 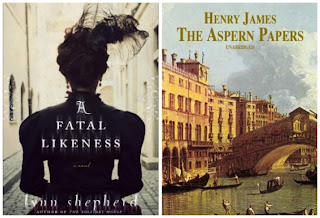 3.  I was reminded last week, when I read Lynn Shepherd's new mystery, A Fatal Likeness, that there was a nonfiction account of the Shelleys and Claire Clairmont and Lord Byron that I had been meaning to read.  But when I read the Afterword, where Shepherd describes the books she used in her research {please add 'footnotes and afterwords, especially in biographies' to the above list}, she mentions that

[Claire] lived on until 1879, the last survivor of a doomed and extraordinary generation. By then she was living with her niece Pauline in Florence, and Henry James' The Aspern Papers is famously inspired by the relationship she developed there with an American named Edward Silsbee, who was desperate to see her papers, and hear her first-hand account of Shelley, Byron and the rest. The St. John's Wood section of A Treacherous Likeness [the UK title] are a deliberate echo of -- and homage to -- the Henry James story.

A Henry I haven't read!

Orientation started yesterday for our new graduate students, and some good news I was waiting for arrived yesterday too {a promotion!}, so things are feeling crisp and new and not-so-suspended, and I think reading will pick up again now. I guess I should try to read these in some logical order, but I'll probably just read them.  Someday.  :)

Congratulations on the promotion!! I adore the Eden books - I can never decide which of the two is my favorite.

I always associate the word 'desultory' with Edith Wharton and have wanted to use it in a post for ages ;-)

Congratulations on the promotion, and on making me think 'I want that', 'I must pluck that from its shelf' or 'I loved that' so many times in just one post.

Congratulations on the promotion!

I started reading The Brontes Went to Woolworths while on holiday this year but the start was so excellent that I decided to save it for a time when I'd be able to devote more attention to it. I'm looking forward to getting back to it soon.

Congratulations! Great post; the connections between books are fascinating! I read the Semi-Attached Couple (and loved it) after stumbling across a volume of Emily Eden's letters.

Another round of applause on your promotion, Audrey! The Brontes have been languishing on my shelves since the day it came out, hot off the Bloomsbury press. If you get the urge to forge ahead I'd be willing to join in!