Paris in July: Clémentine in the Kitchen 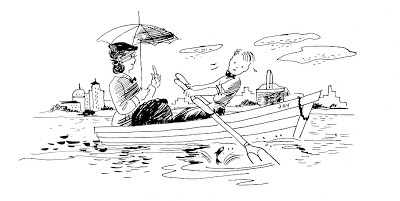 It was early yesterday morning, and I wanted to spend time reading while the day was still quiet and cool. At first I thought I'd start one of the books I had already set aside for Paris in July, but I needed something relaxing and cheerful. This, instead, was perfect.

Clémentine in the Kitchen was written in 1941 {and originally published as a series of articles in Gourmet, a new magazine then} by Samuel Chamberlain, an American artist and photographer who lived with his family in an old stone farmhouse in the village of Senlis, near Paris, in the years before World War II.  It's written in the first person, but Chamberlain gives his family{himself, his wife, and his two children} the fictional name of the Becks. As the story begins, he looks back to 1931:  Mrs. Beck 'had just discharged the fifth cook in eight weeks and was scouting forlornly for a sixth.'  A 'stray telephone number' leads them to 'smiling, pink-cheeked' Clementine Bouchard, who is forty, a confirmed spinster, a native Burgundian, and 'a Cordon Bleu in the best tradition.'

For the book's first fifty pages, the Becks fall in love with Clementine's cooking and her skill at finding escargots in the garden and the best food at the market. But all too soon, there is the sense of an ending.

It seems almost incredible, as I write this, that only three years ago the Beck family was installed in comfort and comparative serenity in a little French town, secure behind high stone walls, well fed, thanks to ministrations of their faithful Burgundian cook, and save for a lingering foreboding following Munich, reasonably happy. ...
June 1939 was beautiful, a perfect month of clear, crystal days, when Parisian families waited eagerly for the weekend and the early Sunday-morning sortie into the country.  The roads from Paris were only moderately filled by such a peaceful exodus. ... elaborate precautions were taken to fill the hamper with delicacies for the classic dejeuner sur l'herbe.  And madame did not forget the Saint-Emilion to go with the cold bird or the chilled bottle of champagne to accompany the fraises des bois, which the children would collect in the forest before the pique-nique began.

The unexpected charm of the book, for me, was that when the Becks are called home, they come to Boston.  They move into an old house in Marblehead, a pretty little town on a hill overlooking the shore {note to self:  when I first moved to Boston -- 20 years ago this month! --  I used to go there every summer.  It's been a long time since I have, though.} To their great delight, Clementine loves the movies, and has no ties, and is happy to go with them.

The Beck family's first and only week on Beacon Hill was a confusing interlude, given over to group acclimatization to the American scene and, more important, house hunting. But the heart of Boston furnishes an easy transition for the bewildered European, and the Becks, fresh from France, felt very much at home there. Not that Louisburg Square resembled the Place Jeanne d'Arc in our little French town, but somehow the atmosphere seemed the same, calm and unharried. And Charles Street, filled with antique shops, book stores, little hole-in-the-wall restaurants, and soul-satisfying fruit stores, might almost have been the Rue St. Hilaire in Senlis, except that it was incessantly choked with automobiles. Young Phinney Beck, aged ten, and Clementine, aged forty, became immediately attached to the swan boats in the Public Garden. They graduated rapidly to a rowboat and spent of those early July days paddling idly about the pond, chattering in French, and counting the number of stories on the Ritz and other gratte-ciels of the neighborhood. That left the rest of us free to look for a place to live.

No book stores or rowboats now, but the rest feels like home. :)

The rest of the book is the story of Clementine's -- and the Becks' -- first impressions of America, and supermarkets, and a butcher who refuses to cut meat the French way, because the American way is good enough, and food wrapped in cellophane, and no shallots or tarragon {Mr. Beck finds them in Boston, though, so all is not lost} and their triumphs in finding that they can still enjoy Clementine's perfect French cooking. The story ended a lot sooner that I wanted it to, 142 pages into a 240-page book, but that's not hard to bear when the last 100 pages are filled with recipes. :)

But one of the strengths of this book, alongside the food and the gentle domestic humor, is that it is very immediate.  We see this time now through a long lens, but the Becks had three weeks to decide what they wanted to take with them {cookbooks and copper pots}, give away their chickens and rabbits, and essentially abandon their French home, before the occupation of France and the fall of Paris. They even travel home on a luxurious French ocean liner, the S.S. Champlain, 'which, in a few months, would lie at the bottom of the ocean.' The rest of the book repeatedly talks about the friends they left there, the bombs that hit their village, and the beloved café owner who loses his restaurant and his arm:

We thought often of Leon during those calamitous days in the summer of 1940, and we continue to think of hum, wondering whether he is carrying on with one arm, picturing the expression of quiet loathing with which he observes the Nazi occupation troops, trying to imagine the sulfurous adjectives he is applying... We think, too, of his love of good food. Leon, who was prodigally extravagant with butter and eggs, what somber light now shines in his eyes when he claims his ration of one egg per month?

A sweet, funny, moving, forgotten book about a family living near Paris, then near Boston, and pages of Clementine's recipes still to look through, and maybe even try.  I don't think I could have stumbled on a better book to spend that morning with. 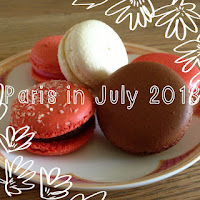 Mon dieu, but I want this book!

You find the most interesting books, Audrey. How did you come across this one? I must investigate the entire Modern Library Food series!

That sounds absolutely charming despite the ties to darker happenings. I had never heard of this before so of course I will leave here and begin hunting. You are a dangerous read as always.

You make this sound so attractive - I love books that combine food and France. Off to add to TBR!