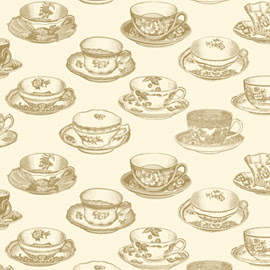 While she was in Oswestry in 1945, to take her mind off her mother's illness, Barbara had started to look through the manuscript of Some Tame Gazelle to see how she might 'improve' it. Jock [her friend Robert Liddell] wrote sympathetically:

I am glad you are working at Some Tame Gazelle  -- if you can it will help and one can even in very bad times. Like me, your writing self is solidly rooted in the past and lives largely on memories. ...

That summer, when he came back from Egypt for a few months, Jock happened to meet [the publisher] Jonathan Cape and wrote to Barbara:

'Once you introduced two very attractive young women to me,' said Mr. Cape
'That would be the Miss Pyms,' said Robert in the reserved tone of one recollecting Miss Manning's experience.
'One of them wrote a book,' said Mr. Cape. 'I did not publish it, but yet it remains in my mind. Why should I remember it?'
'Because it is such a good book,' said Robert in a full salesmanlike tone. 'What other reason could there be? I should not expect you to forget it.'
'Yes, there must be something about it,' said Mr. Cape. 'Do you still see the author? What does she do?'
'She will always write,' said Robert. 'I think she is a natural writer.'
'I think I should see that book,' said Mr. Cape.
'I will give you Third Officer Pym's address,' said Robert quickly.
'No, no,' said Mr. Cape. 'Will you not write to her. Be vague. I do not know that I wish to see the book exactly as it was before.'
'I do not think that Third Officer Pym would let you see it without revision,' said Robert firmly.
'Let her make it more malicious,' said Mr. Cape in the tone of one desiring to make a book strong enough for the Cape list.
'What was it like?' said Mr. Wren Howard.
'It was very funny,' said Robert, 'with much, perhaps too much, apt quotation.'
'Oh, I should not like that,' said Mr. Wren Howard.
'Is this not interesting news?' Let us hope that it is great news.'

The following week he wrote again:

Take Mr. Cape's wish for malice quite seriously. Proust, you know, went round all his characters making them worse ... Tidy up points of style and matter that now seem to you to be lacking in maturity.

With this encouragement and other kind words from Jock ('I have always thought you (after Miss [Compton-Burnett] the finest comic writer of the century') Barbara revised and rewrote Some Tame Gazelle, and by February 1946 she was writing to Henry [another college friend and a lost love]:

I have done a lot of alterations to Some Tame Gazelle and may try it again, after an interval of eight years it may be more acceptable. There is so much I want to write now, that  I hardly know where to begin.

The new version was more tightly constructed, with all the extraneous Germans and Finns pared away, as Jock had suggested. The observation was more acute and the tone more steadily ironic -- Belinda's view of the Archdeacon, though still loving was more clear-sighted and amused. Barbara was fortunate that Some Tame Gazelle had not dated too much. Although the war had changed the English social scene pretty radically, enough remained of pre-war life, especially in the provinces and countryside, to make a novel set in the late 1930s perfectly acceptable. She sent the revised novel to Cape in February 1949 [interestingly, frustratingly, the book doesn't explain this almost three-year gap] and this time  it was accepted.  Jock rejoiced with her at being published at last.

'I know the burden that is lifted off one when at last the reproach of one's barrenness is done away.'

from A Lot to Ask:  A life of Barbara Pym, by Hazel Holt
Can I just say, that if you've had a kind of exasperating week at work, and you knew in advance that the worst part of it would happen on Friday afternoon, and then Friday afternoon and the whole week were over, and even though it was suddenly so hot and un-Pymish outside, you also knew you had Barbara Pym Reading Week to look forward to, that you could be forgiven for saying, on Saturday morning, that Some Tame Gazelle was by your reading chair and all was right with the world?
I celebrated by reading the first six chapters over breakfast (cappuccino and a bagel, not a very Pymish breakfast, but I'm hoping to work in some food during the week in addition to the reading).   I'm still grinning as I write this, because of the autobiographical bits...

Naturally, one did not think of the clergy as expecting anything in the way of material luxuries...Belinda paused, for she was remembering the vicar, Archdeacon Hoccleve, and how one couldn't really say that about him. But then dear Henry was different, in some ways not like a clergyman at all. For although Belinda had loved him faithfully for over thirty years, she sometimes had to admit that he had very few of the obvious virtues that one somehow expected of one's parish priest.

and the foodie bits...

Were all new curates everywhere always given boiled chicken when the came to supper for the first time?  Belinda wondered. It was certainly an established ritual at their house and it seemed somehow right for a new curate. The coldness, the whiteness, the muffling with sauce, perhaps even the sharpness added by the slices of lemon, there was something appropriate here, even if Belinda could not see exactly what it was. 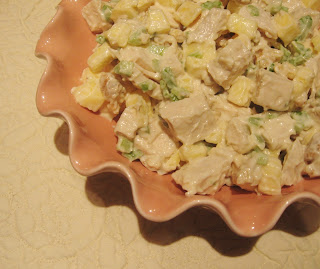 Even before I read this, I made a new chicken salad for dinner on Thursday night.  A little too much lemon, but I did boil {okay, gently poach} the chicken instead of roasting it like I usually do. Do you think that's a sign?
{And thanks, JoAnn, for not giving away too much about the Cauliflower Cheese Incident. It was priceless!}

Barbara Pym Reading Week is being hosted by Thomas and Amanda {thank you both} and will be especially nice because so many of our reading friends are joining in.

Some Tame Gazelle sounds fabulous - I laughed at removing the extraneous Germans and Finns. In my choice of read, Less Than Angels, there has been mention of a resignation due to improper tea-making abilities. What a hoot!

I've been craving a Coronation Chicken sandwich but can't be bothered to go to all of the trouble for just me. Your salad has me drooling, Audrey!

I'm becoming consumed with curiousity about the cauliflower cheese incident :) I do hope I find a copy of this soon.

BTW, I'm stopping at the library this afternoon to pick up a copy of the Hazel Holt biography.

The cauliflower cheese incident is wonderful. I feel as though I should make cauliflower cheese as well this week in tribute, it's one of my favourite things. I hope my copy of The BP Cookbook arrives this week so I can review it before the week ends. I like the idea of your chicken salad too. I'm so glad Jonathan Cape couldn't forget STG.

Sounds like Gazelle will have to be my 2nd Pym just to find out what the cauliflower cheese moment is all about !!

I'm loving how much love there is for BP out there in blogger land :-)

I adore that Ivy Compton-Burnett conversation between Liddell and Jonathan Cape!