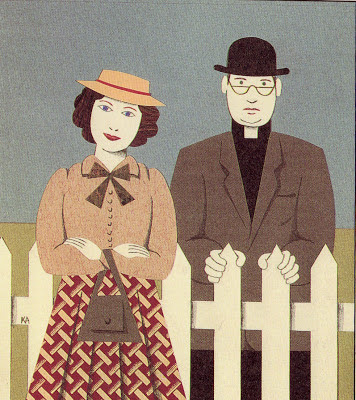 Barbara Pym Reading Week has been so much fun!  As I've mentioned, I first 'discovered' Miss Pym when I was in college (in the last century), and I think I've read all of her novels at least once, but it has been a long time since I've re-read any of them.  Why, oh why?

The second best thing about our celebration of her centenary {the first was reading her along with so many of my reading friends) was rediscovering all the things I remembered about her books {the food, the curates, the dusty learned societies, the anthropologists} and noticing some things that I didn't remember or didn't know about then.  It was so interesting, for example, to know that she put her friends, and situations from her life, into the books, and it was also fun to see how she 'borrowed' characters from one book to use in another. {There's even something Thirkell-ish about this ... when Archdeacon Hoccleve makes a cameo appearance in Jane and Prudence, he's suddenly elderly, and still preaching the same sermon, and you might think you know how Excellent Women ends, and you  might even think it's kind of perfect, but then there's a passing mention in Jane and Prudence...} And I don't think I remembered how funny, how really funny, they are.

But I think the biggest difference in reading them now, versus reading them then, is in the reader. I'm of an age, and in some ways a situation, that's closer to some of her characters now than it would have been then. We don't call ourselves spinsters any more, but if we're honest with ourselves, we do come to face the world differently. I didn't grow up in a generation when marriage was as expected, or as necessary, as it is in these novels {though I am only a generation away from it}. But even though the specific questions and resonances might be different, it's easy for me, now, to understand and sympathize with how doors open and close, and how we sometimes hold onto things {the teapot, a book of poems, an oven cloth, an old love}.

Too philosophical.  There's something to love about each of these books. Oddly enough, Prudence is one of my favorite characters.  She's not really very likable; I'm older than she is; and I only wish I came home from work in an elegant silk dress, to my lovely flat with rose-coloured curtains, made myself a cocktail and cooked an elegant little dinner, so it's hard to say why.

But Prudence did not want to be made to feel sad, and offered to stay at home and get the supper ready. After she had changed her dress she sat in the drawing-room, hoping that perhaps Fabian would telephone or call. But then she realized that of course he too would be at Evensong. A melancholy summer Sunday evening is a thing known to many women in love she thought, seeing herself as rather ill-used left alone in the big, untidy vicarage kitchen, opening a tin of soup and preparing things to go with spaghetti.  Jane hadn't even any long spaghetti, she thought, the tears coming into her eyes, only horrid little broken-up bits. Oh my Love she said to herself, sitting down at the scrubbed kitchen table, thoughts of Fabian and Arthur Grampian and others Philip, Henry and Laurence from the distant past, coming into her mind. Then she thought of Geoffrey Manifold and how good he was to his aunt, and a sense of the sadness of life in general came over her, so that she almost forgot about Fabian refusing to walk with her in the twilight in case it should prejudice his chances of being elected to the Parochial Church Council. When Jane and Nicholas came back from Evensong they found her crouching on the floor in the dining-room, delving in the dark sideboard cupboard among the empty biscuit barrels and tarnished cruets for the sherry decanter.

I think it's because underneath the humor, and the eccentricities of Pym's characters, there's honesty, and acceptance, too.  I found myself liking her characters and situations for the different ways they come through. Barbara Pym honors what they have., and that's a large part of what draws me to her books. {Except that now I really, really want new curtains.}

Thank you again to Thomas and Amanda for organizing this celebration.

{The first image is from the front cover of my paperback
edition of Some Tame Gazelle, c. 1986.}
Noted under: Barbara Pym, Fiction

I had been sorry that I came to Barbara Pym so late, but your posting makes me think it was probably for the best -- I'm about the age (or older) than most of her characters, so I can probably relate to some of these women better.

I agree, Audrey - a lovely post! Like you I first read Pym many years ago - shortly after college I think, and it's frustrating not to even remember which ones I read. It is very much a re-discovery for me, but I can also relate more to her characters now. I don't think I'll have any trouble remembering the books now - though I don't plan to read too many all at once, like I did last time.

I am so glad I came to Pym now - I really relate, and you have put it so charmingly about why exactly that is for women of a certain age. I like the way that she leaves the way open for change too, even when things seem quite grim.

An excellent post, Audrey, and the perfect wrap-up for Pym Reading Week. I do think it's easier to appreciate Pym at a more 'advanced' age. My oldest daughter read Excellent Women a couple of years ago (at 21) and didn't think much of it. Maybe in 20 years...

Such a beautiful post. You have articulated all the things I love about Pym's writing, too. And I really LOVE the cover of your 1986 edition of Some Tame Gazelle! :)