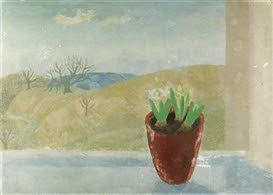 In Reason's ear they will rejoice... How admirable that was! Belinda began to think rather confusedly about the eighteenth century, and what in her undergraduate essays she had called its 'Rationalism'. Had not her favourite, Young, said something about his heart becoming the convert of his head? How useful that must have been!  Belinda began to look back on her own life and came to the regretful conclusion that she had admired the great eighteenth-century poet without really taking his advice. She comforted herself by reflecting that it was now too late to do anything about it, but as she opened a drawer she came upon some skeins of grey wool, the wool she had bought to knit the Archdeacon a pullover.  She knew now that she would never do it. She would  make a jumper for herself, safe, dull, and rather too thick. Surely this was proof that her heart had now become the convert of her head?  Or was it just fear of Agatha?
She shut the drawer and turned her attention to other work preparing to live this day as if it were her last.  As it was a nice bright, she felt that it would be a good opportunity to do some gardening, and later, if she had time, she might write a letter to poor Agatha, who was probably feeling rather lonely all by herself in Karlsbad. It was quite a luxury to be able to think of her as 'poor Agatha'; it showed that absence could do more than just make the heart grow fonder.
Belinda went downstairs and put on her galoshes and an old mackinstosh.  She decided to put some bulbs in the beds in the front garden and then move round to the back. If people came to the door it was more likely that they would come later, and by then she would be out of sight. ... She noticed how splendidly the aubretia had done ... Belinda remembered when she had put them in as little cuttings. They had had a particularly hard winter that year, so that she had been afraid the frost would kill them.  But they had all lived and flourished. How wonderful it was when one came to think of it, what a lot of hardships plants could stand!  And people too. Here Belinda realized how well her own heart, broken at twenty-five, had mended with the passing of the years. Perhaps the slave had grown to love its chains, or whatever it was that the dear old Earl of Rochester had said on that subject.  Belinda was sure that our greater English poets had written much about unhappy lovers not dying of grief, although it was of course more romantic when they did. But there was always hope springing eternal in the human breast, which kept one alive, often unhappily ... it would be an interesting subject on which to read a paper to the Literary Society, which the Archdeacon was always threatening to start in the village.  Belinda began to collect material in her mind and then imagined the typical audience of clergy and female church workers, most of them unmarried. Perhaps after all it would hardly be suitable.

from Some Tame Gazelle, by Barbara Pym

This reminds me of some of the things I learned from reading the biography -- that Pym put herself, and many of her Oxford friends, into this first novel {the Archdeacon was based on another Henry, one of her first loves}, but not very seriously, and  that she had a penchant for quotations.  And it shows many of the things I love about this book:  her fondness for her characters, even when she is laughing at them, the sweetness of the humor, and how even if it's subtle, it's still very funny.

She looked up from the moss and glanced in the direction of the vicarage, to see if anything had happened since she last looked. In the next instant she knew that a great deal had happened. Mr. Mold had come out of the gate and was walking rapidly toward her.

I loved what happens next, how this scene segues into almost screwball comedy, involving the rhododendron bush.

{The painting is Flowers at a Window, by Winifred Nicholson.}

I'm reading this one today, and could truly do with a screwball comedy right now. Welcome information. These Pym books are like a salve for all that ails me right now. :)

A universal salve, then, because I had a week full of an Agatha and I am now fully restored.